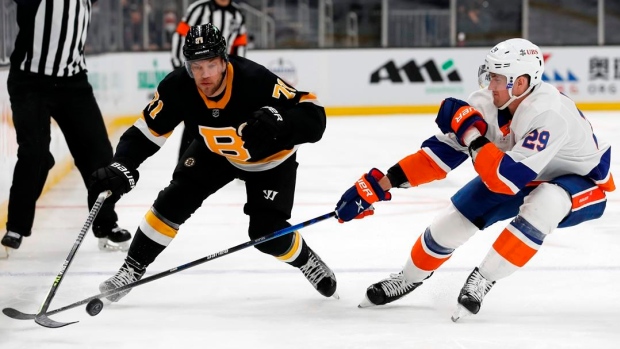 David Pastrnak added his 17th goal of the season and Curtis Lazar had a late empty-netter as Boston put more distance between itself and the idle New York Rangers for the East Division’s final playoff spot.

Ilya Sorokin had 21 saves for the Islanders, who have lost three of four.

Coming off a 4-1 win on Thursday night, the Bruins were again solid defensively, turning back all five of New York’s power play chances.

Boston took a 2-0 lead 47 seconds into the second period when Hall tipped in his fourth goal of the season off a feed from David Krejci.

Hall has brought a spark to Boston’s lineup since the 2017-18 Hart Trophy winner came over from Buffalo at the trade deadline. He scored his first goal as a Bruin Thursday night.

Boston scored the game's first goal with just 2.4 seconds remaining in the first.

Defender Mike Reilly, another of Boston’s trade-deadline pickups, took a pass from Patrice Bergeron and slipped it between Kyle Palmieri and Scott Mayfield to Pastrnak as he waited at the top of the slot. Pastrnak controlled it and placed his snap shot just under the crossbar.

The teams meet one final time this season May 10 in Boston.

Swayman had three great stops in the opening period.

New York centre Brock Nelson got the puck at centre ice and tapped it back to a cutting Michael Dal Colle, who got free for a point-blank shot in the slot. But Swayman handled the wrist shot, blocking it with his shoulder.

Later, when Nelson led a 2-on-1 break and got it ahead to Anthony Beauvillier, his shot also was smothered by Swayman, who slid in to deflect it off his shin guard.

Swayman denied Beauvillier again late in the period when he spun around and caught him trying poke in a loose puck in front of the net.

Islanders: At Philadelphia on Sunday.