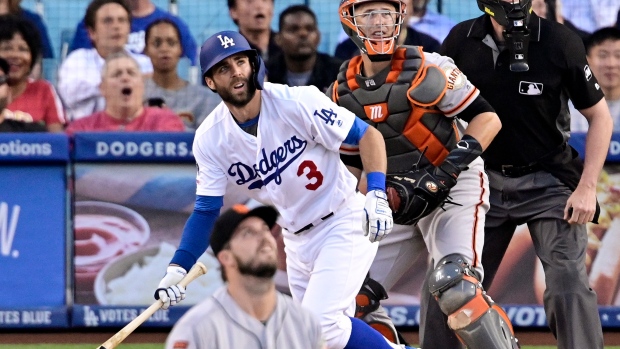 LOS ANGELES — Cody Bellinger keeps getting on base, and if he's at home chances are it's via a home run.

Bellinger slugged his 24th homer — 16th at Dodger Stadium — and Los Angeles kept it together after losing starter Rich Hill to injury in a 9-2 victory over the San Francisco Giants on Wednesday night, becoming the major leagues' first 50-win team.

At 50-25, the Dodgers are tied with the 1977 club for the second-best start in Los Angeles history. It's also the first time since that year that the team has collected 50 wins in its 75th game.

"We're all confident in ourselves and it's showing on the field," Bellinger said.

Chris Taylor homered twice to help the NL West leaders improve to a big league-best 30-9 at home. They routed the Giants for the second straight game, following up on a 9-0 win Tuesday.

The only downer was Hill's departure after one inning because of left forearm discomfort that will send him to the injured list. The left-hander retired the side on 15 pitches with two strikeouts.

"You could see something wasn't right, something was going through his head. Our radar was up," manager Dave Roberts said.

Hill is scheduled for a MRI on Thursday. He said he had elbow tightness in his two previous starts and "everything tightened up" after his third warmup pitch before the second inning.

"I didn't feel it would be a wise move to continue," Hill said. "The MRI will probably show something, but I don't think it will be in the concerning category."

Dylan Floro (2-1) got the victory with one strikeout in two innings. He was followed by Yimi Garcia, Caleb Ferguson, Pedro Bàez and Joe Kelly who combined to limit the Giants to two runs and four hits.

"The bullpen was incredible," Hill said. "Kudos to them."

The Dodgers' offence got going early, powering to a 6-0 lead after three innings.

Taylor hit a two-out, three-run homer in the first off Drew Pomeranz (2-7).

Rookie Kyle Garlick added his first career homer leading off the second, Alex Verdugo had a sacrifice fly and Russell Martin had a two-out RBI single in the third, and Taylor's solo shot in the fifth made it 7-1.

Bellinger recorded his 24th homer in the seventh, a two-run shot off Dereck Rodriguez. He's reached base in 68 of 70 starts this season.

Los Angeles had 13 hits after recording 14 on Tuesday.

The Giants have just 10 hits going into the series finale Thursday.

The Giants' runs came on solo homers by Tyler Austin in the fourth and Mike Yastrzemski in the sixth.

Pomeranz gave up seven runs and nine hits in 4 1/3 innings. He struck out four and walked one. He's worked past the fifth inning just once in 13 starts.

Giants: OF Steven Duggar was scratched with a tight lower back and is day to day. ... INF Pablo Sandoval pinch hit in the ninth after leaving Monday's game with an injured right pinky finger.

The fan who snagged Garlick's home run gave the ball to him and Garlick turned it over to his father after the game. "It was awesome being able to do it in front of my parents," he said.

Dodgers: LHP Julio Urias (3-2, 3.05) comes out of the bullpen to make a spot start in place of RHP Walker Buehler, who gets extra rest. Urias is 1-1 with a 3.66 ERA in four starts this season. He hasn't pitched longer than three innings since April 18.