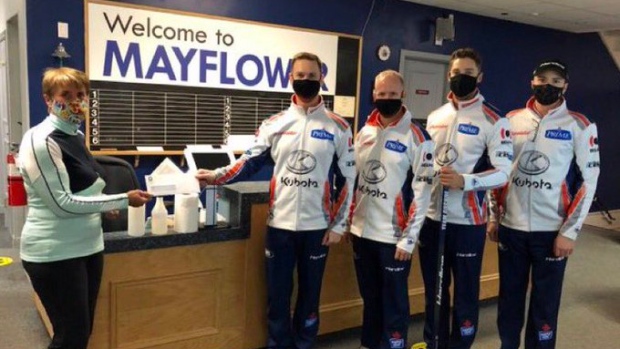 Brad Gushue and his rink from St. John's, Nfld., were victorious in their first bonspiel since winning the Brier Tankard for a third time in four years in March.

Team Gushue went 6-0 at the Dave Jones Stanhope Simpson Insurance Mayflower Cashspiel, beating Team Stuart Thompson of Halifax in the final, 8-4. The championship game was close through six ends before Gushue put up a four-spot in the seventh end which led to early handshakes.

Gushue, third Mark Nichols, second Brett Gallant were joined by a new lead for the Halifax event with Geoff Walker not playing this weekend. Joel Krats, an 18-year-old junior curler from Newfoundland and Labrador who won silver at the Canadian junior championship earlier this year, filled in at front end.

Great to be back competing at the Dave Jones Stanhope Simpson Insurance event in Halifax this weekend! Thanks to everyone involved and especially @KratsJoel for sliding into our lineup this week. #Champs pic.twitter.com/5zojCqchna

Team Gushue were forced to wait a little longer than some other top level rinks given the lack of events in eastern Canada due to the COVID-19 global pandemic.

Team Brothers consists of Brothers at skip, Erin Carmody at third, Sarah Murphy at second and Jennifer Brine at lead.

2020 Dave Jones/Stanhope Simpson champions! 🥇 thanks so much to everyone at the @MayflowerCCHfx for all the hard work! pic.twitter.com/MwcQ3CDC2X

In Saskatchewan, Colton Flasch won his first event with his new team, capturing the Nutana Cash in Saskatoon.

Flasch, third Catlin Schneider, second Kevin Marsh and lead Daniel Marsh went a perfect 6-0 this weekend, hammering Team Nathen Pomedli in the semifinals, 8-1, before edging Jason Jacobson in the final, 6-5. Flasch scored a single in the last end for the win.

Great weekend in Saskatoon going undefeated and taking home first place at the SCT North tour stop! Thanks to all our fans for following along and cheering all weekend.