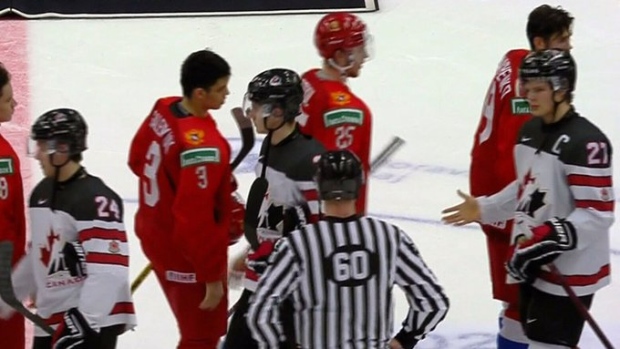 Team Canada captain Barrett Hayton has apologized for not taking his helmet off during the Russian national anthem after they shut out Canada 6-0.

"I'm sorry for leaving my helmet on for the Russian anthem following today's game and I apologize to the Russian team and its fans," said Hayton in a statement. "As a leader on the this team, I was trying to process the game and evaluate how we can regroup. I was lost in the moment. The Russians played a great game tonight and my actions were not intended to be disrespectful. My mistake should not detract from their win. I owe it to my team and all Canadians to be better."

Hockey Canada followed up Hayton's apology with a statement.

"Hockey Canada has tremendous respect for the Russian Ice Hockey Federation, its players, coaches, management and fans. We expect our athletes and staff to share and show that same respect. Following today's game against Russia at the IIHF World Junior Championship, Barrett Hayton did not remove his helmet for the playing of the Russian national anthem. Hockey Canada apologizes to the IIHF, the Russian Ice Hockey Federation and all Canadians for this incident."

Hayton has two goals so far in the tournament, both coming against the United States. This is his second time representing Canada at the World Junior Championship.