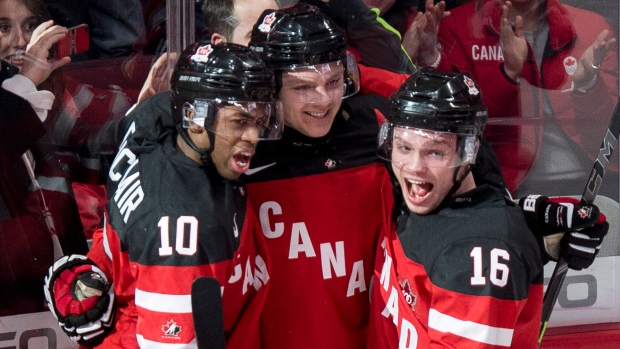 It's been six years since Canada last won gold at the World Junior Championship and this year's team will look to end that drought tonight against Russia.

Canada's last gold came on home ice in Ottawa in 2009, and the team is hoping to repeat that success in Toronto this year. Zach Fucale will get the start in goal for Canada.

"I really want them to just have fun and enjoy it," said Canadian captain Curtis Lazar. "We've worked hard to get to this point. The fans at the ACC have been awesome and I really want them to just get caught in the moment, kind of take a step back and soak it all in, because it's going to be a once-in-a-lifetime experience and opportunity for us.

"I feel like if we go out there and we play the right way, the way we can, we'll be able to get the job done."

Team Canada reached the gold medal game with a 5-1 win over Slovakia on Sunday with Nic Petan leading the way with a hat trick. Petan will start tonight's game on a line with Lazar and Connor McDavid, who had three assists in the semifinal win. Canada outshot Slovakia 44-15 in the rematch of Canada's opening 8-0 win on Boxing Day. Fucale made 14 stops in the semifinal and picked up his fourth win of the tournament.

Thus far, the United States has provided the toughest challenge of the tournament for Canada, who trounced Denmark in the quarterfinal. Russia's road the final, however, has been much tougher.

After finishing as the third seed in Group B with five points (one regulation win, one overtime win and two losses), Russia faced the United States in the quarterfinal round. Despite being outshot 41-25 by the Americans, goaltender Igor Shestyorkin led Russia to a 3-2 win over the United States.

Russia then matched up against unbeaten Sweden in the semifinal round in a rematch of Sweden's 3-2 win on December 29. Russia opened up a 3-0 lead in the third period before relegating Sweden to the bronze medal game with a 4-1 victory.

The Russians feel their tough road to the gold medal game could be an advantage as they take another unbeaten team – and a team yet to trail - in Canada.

"We had a couple of pretty hard games against the U.S. and Sweden," forward Ivan Barbashyov said after Russia's Sunday win. "We know how to play, and we'll be playing the same way we played today and two days ago."

This game will serve as the latest chapter in the storied history of the Canada-Russia rivalry. It is also a rematch of the 2011 World Junior final, in which Canada held a three-goal lead after two periods before  losing 5-3.

Russian coach Valeri Bragin called the matchup against Canada "the best thing for all of the hockey community" and referred to the rivalry as a "hockey classic."

"That rivalry that's been together since the '72 Summit Series that I've been told about and see highlights of all the time, it's going to be something special," Canadian defenceman Joe Hicketts told the Canadian Press. "It's an honour for me to get to wear the Maple Leaf in that game."

Though the two teams did not meet in the tournament, the two met in pre-tournament action on December 19. Canada dominated Russia with a 53-23 differential in shots, but Shestyorkin turned all but one aside as Russia picked up a 2-1 overtime win. Fucale was in net for the loss.

For Canada, McDavid insisted after the team's semifinal win he would play against Russia and was fine despite colliding with teammate Curtis Lazar on Sunday. The 17-year-old has two goals and eight assists through eight games, tied for second in tournament scoring, one point behind Petan.