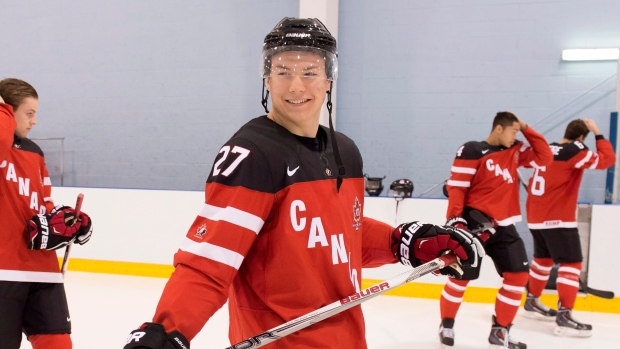 MONTREAL — Curtis Lazar has every reason to be smiling.

The always good-humoured Ottawa Senators rookie on Monday was named captain of Canada's junior hockey team for the upcoming world championship in Toronto and Montreal.

"I'm very honoured to have this opportunity, and I'm going to take full advantage of it and go out there and play hard for my country," Lazar told reporters at a hockey charity event in Montreal. "I know there's a lot of responsibility that comes along with this, but I'm just going to try to take it in stride and be myself."

Canada's coaching staff gave Lazar the news Monday morning, shortly after the team arrived in Montreal from Ottawa where Canada beat Sweden 5-2 in an exhibition game on Sunday. True to character, the Salmon Arm, B.C., native was grinning from ear to ear when he was told.

"As usual, I was smiling," said the 19-year-old, who was drafted 17th overall by the Senators in 2013. "It's pretty cool. I didn't know it was coming. Anyone could have it. I'm very honoured that my peers and my coaching staff think very highly of me.

"I'm a pretty positive guy for the most part. I'm always smiling and trying to keep the guys light. I like to lead by example. I really focus on little details, and I think that goes a long way.

"I want unity within the dressing room. Regardless of where you're from in Canada, we're part of a team now. No one is bigger than the team."

Lazar, who has a goal and six assists in 27 games with Ottawa this season, was loaned to Canada by the Senators last week. He is one of seven returning players from last year's tournament in Malmo, Sweden, where Canada finished fourth.

One year later, Lazar is thinking of redemption.

"I was disappointed with how we played last year and the result we got," he said, looking back on Canada's semifinal loss against Finland, and the defeat to Russia in the bronze-medal game. "Second chances don't come around too often. We're fortunate to have this chance."

Connor McDavid of the Erie Otters and Sam Reinhart of the Kootenay Ice will serve as alternate captains for the tournament, which officially gets underway on Dec. 26.

McDavid and Reinhart also represented Canada at the 2014 junior championship and were teammates at the 2013 IIHF Ice Hockey U18 World Championship, where the Canadians won the gold medal.

The 17-year-old McDavid, who is touted as the best forward in the upcoming 2015 NHL draft, had nothing but praise for his new captain.

"He's always positive, and he always has a smile on his face," McDavid said of Lazar. "Nothing seems to bring him down. He's the perfect guy for the job. The ups and downs of this tournament are pretty crazy, but he never seems to go down. He's going to be a good captain."

McDavid, who played for the first time on Sunday since breaking his right hand in November, has a blistering 51 points for the Otters in 18 games this season. Reinhart, meanwhile, played nine games with the Buffalo Sabres at the start of this season before returning to the Western Hockey League in October.

"To wear a letter is something special," said McDavid. "But there are 22 leaders on this team — it's not just three guys. The letter is special, but everyone is a leader."

Head coach Benoit Groulx knows exactly what kind of player it takes to lead a team to victory.

"Sam, Curtis and Connor have the same qualities," said Groulx, winner of three Quebec Major Junior Hockey League championships as head coach. "They're great young men, they want to win, they're great hockey players, and they want to make a difference. This is what you need in your leadership group.

"It was an obvious choice."

Although he's just 19, Lazar wants to use his world junior and NHL experience to guide some of the younger players on Canada's roster. He says he wants them to pay attention to detail, and to really enjoy the tournament.

But overall, Lazar wants to win. He wants to know what it means to wear a gold medal around his neck.

"It would be very cool," he said. "That's one thing I want to check off my junior resume."

Canada plays one more exhibition game versus Switzerland on Tuesday before their tournament opens on Boxing Day with a game against Slovakia at the Bell Centre in Montreal.

Notes: The Canadians will also play Germany, Finland and the United States in the group stage. … Canada's junior team gathered at McGill University's McConnell Arena in Montreal on Monday to help launch "The Big Play" program, which aims to get kids across the country in minor hockey. … Lazar also played at the 2012 World Under-17 Hockey Challenge and with Canada's men's under-18 team. … The world junior gold medal game will be played Jan. 5 in Toronto.