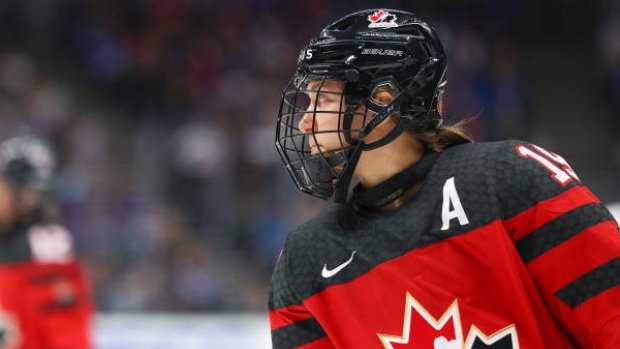 Brianne Jenner is one of only five players on the current Team Canada roster who has won a gold medal at the IIHF Women’s World Championship.

Jenner, along with teammates Marie-Philip Poulin, Jocelyne Larocque, Natalie Spooner and Rebecca Johnston, were on the Canadian roster that last won gold at the Women’s Worlds back in 2012.

At that point, Jenner was still a young player for Canada at age 21 but she has since evolved from NCAA standout to a leader.

Starting in 2005-06, the Oakville, Ont., native played her junior hockey with the Stoney Creek Sabres of the Provincial Women’s Hockey League for three seasons, and served as captain for the latter two seasons.

She captained Team Ontario Red at the 2008 National Women's Under-18 Championship and scored the game-winning goal in double overtime of the gold-medal game.

That same year, Jenner also made her international debut at the inaugural IIHF Women’s World U18 Championship, earning silver for Canada.

During the 2008-09 season, she made her Canadian Women’s Hockey League debut with the Mississauga Chiefs, recording a goal and an assist in 11 games.

She would also return to the Women’s U18s in 2009, captaining Canada to silver. Jenner also made the Team Canada centralization roster ahead of the 2010 Olympics but was cut from the final roster along with Larocque on Nov. 27, 2009.

In 2009-10, she played her first full season in the CWHL with the Burlington Barracudas, recording 11 goals and 23 points in 17 games.

Jenner kicked off her NCAA career in 2010-11 at Cornell University. She put up 23 goals and 50 points in 33 games, earning her Ivy League Rookie of the Year honours.

In 2012-13, she was a Patty Kazmaier Award finalist (given annually to the best collegiate women’s hockey player) for the first time, after a season where she racked up 35 goals and 70 points in 32 games at Cornell.

At the 2013 Women’s Worlds, she had four goals and six points for another silver medal.

After being cut from the 2010 roster, Jenner made her first Olympic roster in 2014. In Sochi, she had one goal in five games, with her lone goal notably coming in the gold-medal game against the United States that helped sparked Canada’s comeback from down 2-0 to claim the gold medal 3-2 in overtime.

Returning to Cornell in 2014-15 after spending the 2013-14 season centralizing with Team Canada, Jenner enjoyed a strong finish to her NCAA career with 15 goals and 51 points in 31 games as she earned her second career Patty Kazmaier Award nomination.

While the 2015 Women’s Worlds ended in another silver medal for Canada, Jenner was named a top-3 player on the team at the tournament with one goal and three points in five games. And for the first time with the senior national team, Jenner wore an ‘A’ on her sweater.

At the conclusion of her college career in 2015, Jenner was selected fourth overall by the Calgary Inferno at the CWHL Draft.

In 2015-16, her first season in Calgary, she put up 10 goals and 28 points in 24 games as the Inferno claimed the Clarkson Cup, with Jenner scoring twice in the championship game over Les Canadiennes de Montreal.

The 2016 Women’s Worlds yielded yet another silver for Canada as Jenner recorded one goal and five points.

At the 2017 Women’s Worlds, Jenner wore the ‘A’ for the senior team for the second time in her career as she had four points in five games to capture silver with Canada.

In 2017-18, Jenner centralized with Team Canada ahead of the 2018 PyeongChang Olympics and made her second Olympic roster. Wearing an ‘A’ for Canada, Jenner had two assists in five games as Canada took home silver after losing 3-2 in the shootout against the Americans in the gold-medal game.

In 2019, Jenner joined the Professional Women’s Hockey Players Association that formed in the wake of the CWHL folding. She was one of four team captains during the association’s inaugural showcase in Toronto as part of the Dream Gap Tour.

At the 2019 Women’s Worlds, Canada did not play in the championship game for the first time ever after a 4-2 loss to Finland in the semifinals. They would settle for bronze in a 7-0 win over Russia. An assistant captain once again, Jenner had three goals and nine points in seven games and was named a top-3 player on the team.

Currently, Jenner plays in the PWHPA as part of Team Sonnet in Toronto. She participated in the 2021 Secret Cup in Calgary in May and had one goal in the championship game as Team Sonnet lost 4-2 to Montreal’s Team Bauer.

Jenner has also brought her expertise to the coaching arena with the Brianne Jenner Hockey Academy that offers spring and summer programs for youth players.

In 2018-19, she was an assistant coach at Mount Royal University in Calgary and in 2019-20, was a skill development coach at the University of Toronto and with the Oakville Hornets Association.