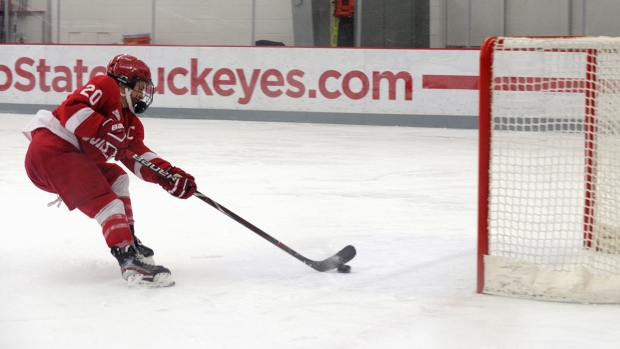 Kristin O’Neill is one of eight players who will be making their women’s worlds debut for Canada at this month’s IIHF Women’s World Championship.

O’Neill grew up playing hockey in the Greater Toronto Area. In 2013, she won the Lower Lakes Female Hockey League championship with the Stoney Creek Sabres and also took home a silver medal with Ontario Blue at the 2013 National Women’s Under-18 Championship.

She continued to have success with Stoney Creek in the 2014-15 season, winning the Provincial Women’s Hockey League championship and finishing second at the Ontario Women’s Hockey Association provincials (Intermediate AA). She was named captain of the Sabres the following year and led the team in goals, assists and points.

O’Neill also picked up a silver medal with Ontario at the 2015 Canada Winter Games, and she followed that up with gold while representing Ontario Red at the 2015 National Women’s Under-18 Championship, netting a goal in the semifinal.

That same year, O’Neill won silver with Canada’s under-18 team at the 2015 IIHF U18 Women’s World Championship. She and the team would finish second again in the 2016 edition of the tournament.

O’Neill started playing for Cornell in 2016 and said one of the reasons she chose the school was the Hockey Canada connections, with players like Brianne Jenner and Rebecca Johnston among the alumni.

In her first season, she was named Ivy League Rookie of the Year and was second on the team in scoring, helping lead the Big Red to the quarter-finals of the NCAA tournament.

As a sophomore, she led Cornell in goals (20), assists (21), and points (41). She earned Ivy League Player of the Year honours and was both an Ivy League and ECAC First Team All-Star. She also became just the third sophomore to be a captain in the program’s history.

O’Neill once again led the Big Red in scoring in her third season with 38 points in 33 games, and she finished her career at Cornell in the top 10 for several statistical categories, including most shorthanded goals (10), 10th-most points (145), and third-most shots (546).

After leaving Cornell, O’Neill joined Montreal’s Team Bauer in the PWHPA. During this year’s Dream Gap Tour showcase in Calgary, she scored her first professional goal on May 25 against Team Scotiabank. She would add a second goal en route to her team winning the championship game.

During her collegiate years, O’Neill spent time with the Canadian development team, winning silver at the 2017 Nations Cup. She made her senior team debut at the 2018 4 Nations Cup, recording two assists and picking up a silver medal.

She also featured for Canada in the two-game series against the Americans in 2019 but was not named to the roster for the 2019 or 2020 world championships.

O’Neill is still adapting to the international game and says she has picked up on a few key adjustments that she needs to make.

“I'd say the speed of skaters isn't too different, but the speed of the puck is, I'd say, the most different thing from college hockey to playing with the national team,” she said. “Decisions and puck movement just has to be that much quicker.”