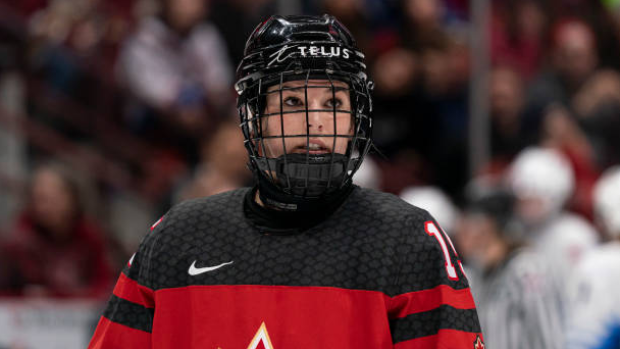 Despite owning two Olympic medals, forward Mélodie Daoust will be playing in just her second-ever IIHF Women’s World Championship when the tournament kicks off on Aug. 20 in Calgary.

The Valleyfield, Que., native kicked off her international career with Canada in 2009 at the IIHF Women’s World U18 Championship, where she had six goals and 12 points in five games in a silver medal-winning effort.

She returned to the Women’s U18 tournament in 2010 but upgraded that silver to a gold and also wore an ‘A’ on her sweater.

In her first foray at the Olympics in 2014, Daoust won gold with Canada in Sochi, scoring one goal in seven games.

The 2018 PyeongChang Olympics saw Daoust turn in a star performance with three goals and seven points in five games as Canada earned silver. She was named tournament MVP and to the media All-Star team.

On Team Canada, Daoust has lined up alongside good friend Marie-Philip Poulin as their off-ice friendship has translated into a successful on-ice partnership.

“Pou and I are best friends off the ice. When you put us on a line together, I don’t even have to look where she is, I just know where she is going to be. And that connection between the two of us on the ice, I think people can notice that.

“It’s from playing together, pushing each other constantly on and off the ice, in the gym we’re trying to make [a] competition out of everything. I think that’s the best part of our relationship. We want to be the best we can every single day, and we want to push each other to make sure our team is getting better also.”

Daoust appeared in two games (recording three assists) with the then-named Montreal Stars of the Canadian Women’s Hockey League in 2010-11.

In 2011-12, Daoust chose a different path. Instead of going to the NCAA like many players who aspire to play for the national team do, she kicked off her university hockey career at McGill University where she would go on to win CIS Rookie of the Year and bronze at the CIS national championship with the Martlets.

As a sophomore, Daoust won the Broderick Trophy as CIS Player of the Year, and led the league in scoring with 21 goals and 33 assists in 20 regular season games as McGill went a perfect 20-0.

After red-shirting in 2013-14 to centralize with Team Canada, Daoust returned to the Martlets in 2014-15 but missed most of the season after undergoing ACL surgery, forcing her off the ice for six months.

When her career at McGill wrapped up, Daoust returned to the CWHL in Montreal, which had changed their name from the Stars to Les Canadiennes de Montreal. Her only full season with Les Canadiennes in 2018-19 saw her net 11 goals and 20 points in 14 games as an assistant captain.

In 2020, she was a part of the Canadian All-Stars at the Elite Women’s 3-on-3 game at the NHL All-Star Game in St. Louis, defeating the American All-Stars 2-1.

Currently, Daoust is a part of the PWHPA playing for Team Bauer in the Montreal region. Off the ice, she is an NHL analyst at TVA as the network’s first female analyst with only Cassie Campbell-Pascall holding a similar role in Canada. She also serves as an assistant coach with the University of Montreal Carabins women’s team.

In May, she missed the Secret Cup in Calgary after undergoing surgery on her left wrist.

Now a veteran at 29, Daoust has seen her role evolve on the national team from young depth player to being a part of the leadership core.

“I think my role has changed so much from 2014 to 2018, I’m now a veteran on the team, getting older and I love being a part of this team so much. The thing I try to bring out every single day, whether I’m around the team or not is to stay connected with my teammates, I think I’m a pretty easy-going person.

“I don’t like to be too focused off the ice so making sure I keep the room light, that’s pretty much my leading style. But as a leader I like to show what to do by example so not so much of a vocal leader, but more of an action kind of leader.”