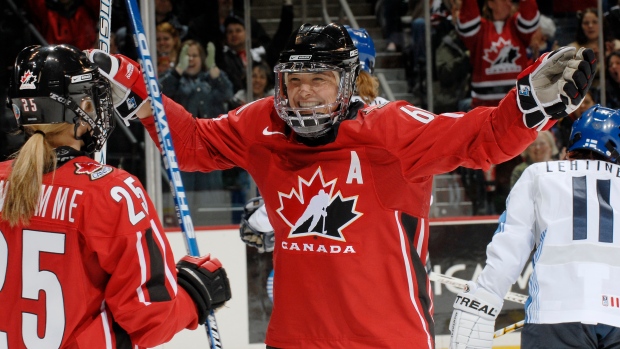 When Canada’s women’s hockey team hits the ice next month at the 2021 IIHF Women’s World Championship, the team will be helped by two trailblazing women behind the bench: Vicky Sunohara, a pioneer in women’s hockey, and Kori Cheverie, who broke barriers in U Sports.

Sunohara and Cheverie are part of Canada’s staff as assistant coaches for the upcoming women’s worlds. They’ll be working alongside head coach Troy Ryan with the goal of helping Canada win its first world championship gold medal since 2012.

“I’m really excited with where we’re at with the program right now,” Cheverie told TSN. “Any time you pull a Team Canada jersey on the expectation and goal is to win gold, and that’s what we’ve got our eyes set on right now.”

“It’s a new year, a new team, it’s a new staff, and this team is going to be prepared, and confident I’m sure, going into the world championship,” said Sunohara.

The tournament, which takes place in Halifax and Truro, N.S., will kick off on May 6. Canada faces Finland in the team’s opener, which can be seen live on TSN.

Sunohara is a former player with the national team and a legend within the game. She played 164 games with Canada and tallied 56 goals and 119 points, ninth-most in the program’s history. She is a three-time Olympic medallist, including two golds, and won seven world titles.

After retiring in 2007, Sunohara shifted her focus to coaching. The native of Scarborough, Ont. has been the bench boss of the University of Toronto’s women’s hockey team since 2011 and was named U Sports coach of the year in 2020.

Sunohara had participated in a few under-18 camps with Canada, but she got back in the fold with the senior team when Gina Kingsbury, the director of the Canadian women’s national team and a former teammate of Sunohara, invited her to a “mini-camp” in Toronto last year.

“The opportunity to be around those athletes was very exciting for me,” said Sunohara. “Actually being on the ice with the coaching staff, with Kori and Troy – it was just such a great environment and brought back so many memories as a player. So, when Gina asked me in the summer to carry on and possibly coach at the world championship, it was really a no-brainer for me.”

“I had the opportunity to learn from so many great players and so many great coaches,” added Sunohara. “I really try to pass that information, those experiences, to all of the athletes that I coach. Being able to do that and share my experiences now with the national team is something that’s such a privilege to do. I’m very excited for the opportunity.”

Cheverie had been an assistant coach with Canada’s under-18 team, winning gold at the 2019 IIHF U18 Women’s World Championship. Like Sunohara, Cheverie was invited to last year’s camp in Toronto with the senior team.

“Working with the coaches at the national team level was great, and that’s where I got my foot in the door with the senior program,” said Cheverie. “I guess I did a good job and they wanted me back, so that’s kind of where it all started.”

Before coaching, Cheverie played for six seasons with the Toronto Furies in the CWHL, winning the Clarkson Cup in 2014.

“I think near the end of my career I started to see myself as a little bit more of a mentor to the younger players coming into the league,” said Cheverie. “So, I thought that coaching would be the next natural progression to stay involved in the game. I thought that I kind of knew everything about the game, but I really had to become a student, put on my coaching hat, and change gears a little bit.”

Cheverie joined Ryerson as a skate-training specialist for the Rams hockey teams. She then made history when she was named an assistant coach of the men’s team, becoming the first woman to be named a full-time coach of a men’s hockey program in U Sports.

“To be honest, I didn’t see much room on the women’s side while I was at Ryerson,” said Cheverie. “There were some great coaches there who were lined up for that position. I saw an opportunity on the men’s side and I didn’t think anything of it. I applied for the position. I knew who was going to be the head coach and it was a great opportunity for me to get my foot in the door, learn the coaching side of the game, and it just so happened to be on the men’s side.”

Has Cheverie noticed any differences between coaching men and women?

“I get asked this question all the time,” she said with a smile. “To be honest, I thought maybe at the beginning of my career I had to be a different way because I was coaching men, but I learned very quickly that I just like to approach my coaching style with an authentic lens. I just bring who I am to the rink every single day and I think that my relationships with the players really are built on that.”

Both Cheverie and Sunohara noted that a major part of their approach to coaching involves connecting on a personal level with the players.

“I really think getting to know the players, being genuine and finding ways to help motivate them and treating them as people first is something that I’ve learned and I 100 per cent believe in,” said Sunohara. “The passion that I have for the game and for each of the people involved is something that drives me. I want to get to know them. I want to help them as best as I can. I think the people side and getting the team together is really key in successful teams.”

The pair have also formed a close working relationship with each other, although Sunohara, 50, couldn’t help noting the age difference with her 33-year-old colleague.

“She’s a lot younger than me,” Sunohara said with a smile, “But I’ve drawn a lot on her experiences, her knowledge of the game. I think our conversations have gone quite well. We’re both on the same page. We’re so passionate about helping this team, helping Canada be successful at this world championship.

“It’s been awesome working with Kori. As soon as we realized that we were both on the coaching staff, we started calling each other, talking a lot of hockey, but getting to know each other.”

“Vicky and I have a great relationship,” said Cheverie. “We talk on a daily basis. It’s kind of cool because I grew up watching Vicky and now I get to coach with her. I do lean on her for her experience as a player but also as a coach. I think we work really well with sharing ideas about the game and how we want to play.”

Having two women on the coaching staff has not gone unnoticed by the Canadian players.

For Cheverie, a native of New Glasgow, N.S., the upcoming women’s worlds will also be a provincial homecoming.

“To have it in my home province of Nova Scotia is just going to be so exciting with my family being able to watch, whether it’s in person or on TV. But having that support, feeling that energy of the Maritimes – I’m really looking forward to it,” she said.

Sunohara offers a different perspective. She played in the inaugural tournament in 1990, with Canada taking home the first-ever gold medal at the women’s worlds. She will now be part of the 20th edition of the tournament, and she says there’s “no doubt” that the game has evolved.

“I look back – and not to discredit any of the players that I played with in 1990 because their hockey IQ was unbelievable – but it’s come so far,” she said. “I think with all of the kids playing today and the opportunities that they have, the access, the skill development and coaching – I think it’s really played a huge role. The speed and the physicality of the game has grown quite a bit since I played, and since 1990 for sure.”

It's been nine years since Canada last won gold, the team’s longest-ever championship drought at the women’s worlds. Sunohara took home gold at seven of the eight world championships she played in, but she stressed that it was never easy.

“Those games were always so close,” she said. “The semifinal games, often against Finland, were always so close. I think that the world championship has been like that since I retired in 2007… It was always difficult, always close and it still is. We just haven’t been on that winning side for a few of those world championships, and we’re hoping to reframe that and get on the winning side this year in Halifax.”