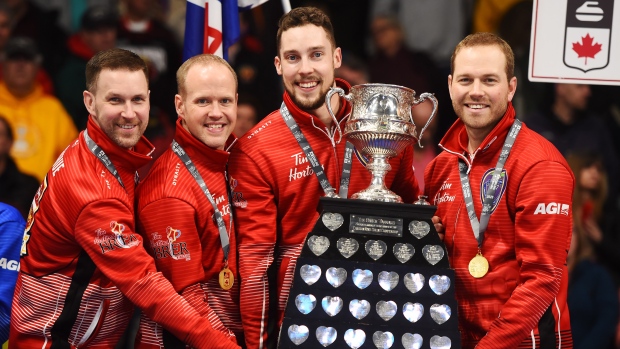 KINGSTON, Ont. - It might be time to call Brad Gushue and his St. John’s, Nfld., rink a dynasty. At the very least, one of the best foursomes to ever play.

That’s what you get when you win three Canadian championships over four years.

Gushue and Nichols were on fire from their very first throws on the night. Nichols shot 89 per cent with his skip shooting a blistering 97 per cent.

In a Brier that was widely regarded as possibly the most competitive and intense in its long history, Gushue says it was “friggen awesome,” to be the last team standing.

“I don’t know if you can quote that or use it, but it feels absolutely incredible to win in this field which is probably the strongest field I’ve certainly played in, in the 17 Briers and to come through and play the game we played today, that’s special,” said Gushue immediately after the win.

Gushue, who also has a world title and an Olympic gold medal in his back pocket, says his team came into this year's Brier with a bit of a chip on their shoulders.

"We kind of didn't get any credit to be one of the favourites. There was a lot of talk about other teams and we were kind of left to the side a little bit. We felt we should of been in there [after] winning two of the last three," said Gushue "I think we were highly motivated this week, more so than we have been in the last two years."

Gushue joins Randy Ferbey and Ernie Richardson as the only skips to win three Tankards in four years with the same team. Team Gushue has also made four of the last five Brier finals.

Is a curling dynasty in the works?

“That’s for you guys to decide,” said Gushue. “We've been playing pretty good at this event, but it’s just fun to win this. I don’t think about all that other stuff. What an incredible week. I’m so proud of our team. We played so well.”

Nichols was reluctant to use that word to describe Team Gushue as well.

“I wouldn’t want to say that, but this team has been through so much together over the last eight, nine years. We’ve lost a couple Brier finals. We’ve won three now. We’re always putting ourselves [in a position] to play really well in big moments,” said Nichols. “These guys are great to work with. Nobody gives up on each other.”

Gushue won his first Tankard on home soil in St. John’s in 2017 in one of the most memorable national championships of all-time before defeating Bottcher in the 2018 Brier final in Regina.

The 39-year-old says this victory felt extra special given the adversity the team faced this week.

“It’s almost feels better than the second one. I hate to put that one down. We played so well in Regina that we never had any adversity. This week we did,” said Gushue. “To come though and win, it feels pretty good.”

Newfoundland and Labrador defeated Northern Ontario Saturday night in the 3 vs. 4 page playoff after Brad Jacobs and his Sault Ste. Marie rink had already won a pair of tiebreakers earlier in the day. Gushue than defeated Saskatchewan’s Matt Dunstone, 7-6, in the semi-final Sunday afternoon.

Team Gushue becomes only the third team to win the Brier from the third playoff position. Alberta’s Kevin Koe did it twice, once in 2010 and again in 2016.

Newfoundland was in control from the very start, stealing a single in the first end after Bottcher flashed a blank attempt. Then in the third end, Bottcher wrecked on the guard, opening the door for Gushue to nail an impressive double takeout for a score of three and decisive 4-1 lead.

“All credit to the whole team,” said Nichols on his team’s play this week. “We didn’t give up on any rocks. We played every game right to the end. Brad played unbelievable”

With the victory, Team Gushue also earn a spot in the 2021 Roar of the Rings Olympic trials and will represent Canada at the world men’s curling championship next month in Glasgow, Scotland.

Gallant is excited to wear Team Canada colours once again.

“I’m sure there’s a lot of happy curlers in Newfoundland right now…Team Canada never gets old,” he said.

Gallant wouldn’t say where this ranks Team Gushue when it comes to the greatest-ever talk but did give some high praise for his vice and skip.

“One of the keys to our success has been consistency. We like to think we have a chance to win every event we show up to and the way Brad and Mark have curled over the years, their consistency and play, some of the greatest curlers of all-time in my opinion.”

Three in a row for Bottcher

Bottcher becomes the first skip in history to lose three consecutive finals at the Brier. Al Hackner, Guy Hemmings and Glenn Howard are the only ones to drop two in a row.

“I think we got off to a little bit of a slow start. Certainly, didn’t play our best early and you can't give that big of a lead to those guys,” said Bottcher after the game.

Third Darren Moulding was emotional after the loss.

“I’m starting to get older. I don’t know how many times I’m going to be able to get back here,” said the 37-year-old. “I’m just proud of the guys. I just wished it would have turned out different. I know we can play a lot better than that.”

Bottcher shot 71 per cent and had some key misses early on, giving Gushue an opportunity to almost shoot a perfect game percentage wise.

“He played great. We gave him some pretty easy shots,” said Bottcher. “I just think me and the guys needed to shoot a little bit better."

The 28-year-old skip said they may have been a little fooled early by the conditions.

“The conditions were a little different than what we’ve seen,” explained Bottcher. “That unfortunately was the difference.”

Nichols says he feels for Bottcher’s team and thinks they’ll one day get to the top of the curling mountain.

“Brendan is going to win a heck of a lot of these things over the course of his career. He’s too good not to. And they're a great team. Hopefully we’re done curling before they start winning,” said Nichols.