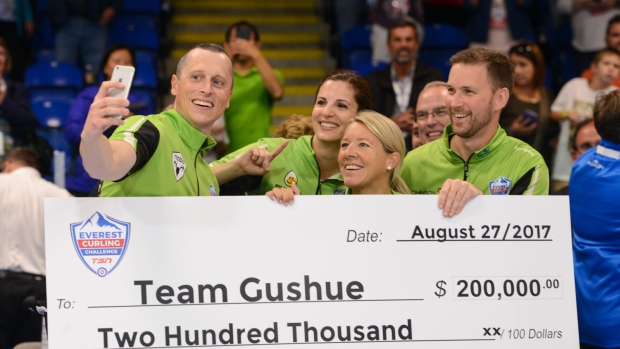 Team Brad Gushue secured the win at the inaugural Everest Curling Challenge in Fredericton, edging Team John Epping by one in the eighth end for a final of 6-5. Gushue and his team of Cathy Overton, E. J. Harnden, and Lisa Weagle took home the $200,000 prize.

In an incredibly close game that was tied in both the fifth and going into the eighth and final end, Gushue started with the hammer and scored three in the first. After a blank end in the second, Epping took one in the third making it 3-1. He then went on to steal one in both the fourth and fifth ends, tying things up at 3-3. Gushue took the lead in the sixth after scoring two, only to have Epping tie things up again in the seventh. Headed into the final end it was 5-5 and Gushue had the hammer. With two rocks in play for Epping, Gushue was able to score one for the win.

In the exciting matchup, play was stopped in the second end after the slider on second E. J. Harnden's shoe started coming off, but after a shoe loan from fellow curler – and Epping teammate – Mat Camm, play resumed.

The final matchup at the Everest Curling Challenge featured players from each of the original competition teams participating in the event.