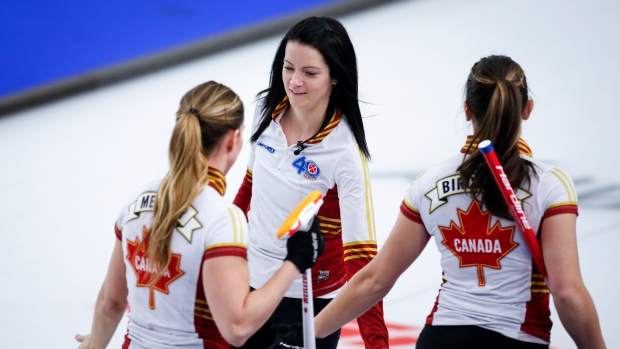 Team Kerri Einarson are well-versed in the art of battling through adversity and disappointment, as the Gimli, Man., rink has been through the wringer once or twice during their three years together.

At the time of their inception, Einarson, Val Sweeting, Shannon Birchard and Briane Meilleur were all skipping their own teams on the World Curling Tour and faced questions as to whether or not a team full of shot callers would work.

They quickly proved the unusual lineup could function, putting up an impressive 76-28 record in 2018-19 with numerous final appearances, including six wins on Tour. But there was still another level to reach after heartbreaking losses in the Manitoba final and the Scotties Tournament of Hearts wild-card game.

"When we made this team, we had a lot of confidence in it,” said Meilleur. “We knew we had good personalities to play those new roles and take it on and not look back.”

They got over the provincial hump the following season and went on to defeat Rachel Homan in the Scotties final for their first Canadian championship.

The euphoria of victory was quickly dashed with disappointment when the World Women’s Curling Championship was called off due to the pandemic. To make matters worse, the team was already in Prince George, B.C., when it was cancelled. The dream of wearing the Maple Leaf was gone in an instant.

Now, over a year later, Einarson and company will have their dream come true following a remarkable 22-4 run inside the Calgary curling bubble at the Markin MacPhail Centre. And this might be their biggest challenge yet as the team has spent approximately 40 days inside the bubble, the most by far out of all the teams competing at the LGT World Women’s Curling Championship.

Birchard said the team has learned how to power through adversity during this unprecedented season.

“That's kind of been the theme, just rolling with the punches,” said the second, who also has a Scotties title with Jennifer Jones. “And just continuing to stay positive and have a great attitude out there. We're having a lot of fun out on the ice and just really enjoying being together and playing this great game."

The 33-year-old Einarson, a mother of seven-year-old twin daughters, says bubble life has brought her already close-knit team even closer.

"I'm just so grateful to have them as my teammates and so very proud of them,” explained Einarson. “This isn't easy. It's not easy being in the bubble, leaving your family back home. They're just so strong. From front end to the third. They just give it their all out there every single game. I'm very lucky to have them."

Taking on the World

Canada may still have the best curling depth on the planet, but their days of being the undisputed favourites at the world championships are long gone.

On both the men’s and women’s side, Canada could easily fall victim to Sweden, Scotland, Switzerland and the United States, just to name a few. The Asian nations – China, South Korea and Japan – have been developing impressive curling programs over the past few years as well.

The women’s worlds won’t be any different as 2018 Olympic champion Anna Hasselborg of Sweden, defending world champion Silvana Tirinzoni of Switzerland and the “Garlic Girls” led by South Korea’s EunJung Kim all have a good shot of winning gold.

"We've come to expect it,” said Canadian national coach Elaine Dagg-Jackson. “I guess we're more prepared, more able to embrace the challenge of knowing that every team that comes to the women's worlds is training and prepared and well coached. So, we're very prepared for the international competition. It's going to be better than ever."

Luckily, Team Einarson has recently battled and had success against the top contenders on the Grand Slam circuit, including a semifinal win over Team Hasselborg at the Players’ Championship last weekend.

Einarson knows the immense pressure of representing Canada at the international level can be daunting. That’s why the objective is to avoid any potential distractions during the week and focus on the goal at hand.

The top six finishers following pool play will not only qualify for the playoffs at the world championships but will give their country an automatic entry into the 2022 Beijing Olympics.

“We're not going to change anything,” said Team Einarson coach Heather Nedohin, a two-time bronze medallist at the worlds. “We are building momentum from each other individually and as a team. We embrace each game and learn from it, then move on to the next."

Canada gets things going Friday afternoon against Sweden’s Team Hasselborg. Catch the game at 4 p.m. ET/1 p.m. PT on TSN1 and streaming on TSN.ca, the TSN App and TSN Direct.