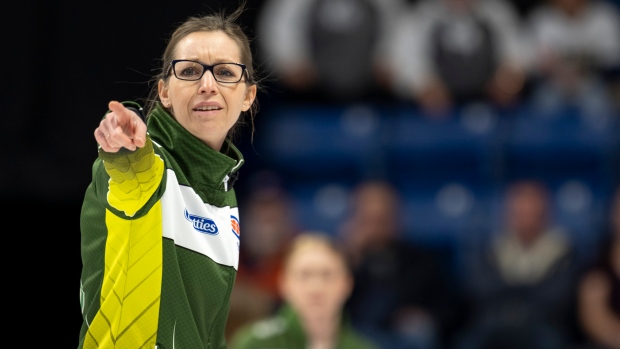 Thunder Bay's Team Krista McCarville has declined the Northern Ontario Curling Association's invite to represent the region at the 2021 Scotties Tournament of Hearts.

It breaks our hearts to share that our team will be declining the invitation to represent Northern Ontario at the Scotties. There were tears as we made this decision because we love the Scotties (1/6)

As defending Northern Ontario champions, the team of skip McCarville, third Kendra Lilly, second Ashley Sippala and lead Sarah Potts received an invite from NOCA earlier this month after the cancellation of provincial playdowns. However, they were forced to reject the invite to participate in the Calgary curling bubble, citing travel restrictions as well as family and work commitments. McCarville works as a teacher in Thunder Bay.

"It breaks our hearts to share that our team will be declining the invitation to represent Northern Ontario at the Scotties. There were tears as we made this decision because we love the Scotties," the team said on Twitter. "It’s a very special event and it’s our lifelong dream to win it. Our decision is a result of travel restrictions in our community and the impact returning home would have on our families and employment.

"We want to thank the NOCA for nominating our team. It’s always an honour to wear the green and gold.  We truly appreciate Curling Canada and all of the hard work they put in to making the Scotties a reality this year. We have every confidence that their plan for a Calgary bubble will be successful!

"As difficult as this is, we also recognize that a lot of people have experienced significant loss due to Covid. Our thoughts are with all the families who have lost loved ones...and our heartfelt appreciation goes out to all frontline workers. Thank you to our family, friends and fans for your continued support."

With McCarville out of the picture, NOCA will now have to decide who will be their rep at the Scotties. Team Krysta Burns lost to Team McCarville in last year's Northern Ontario final and could be an option.

Team Brad Jacobs, the defending Northern Ontario champs on the men's side, have already accepted their invitation and will make the trip to Calgary.

Team McCarville were looking forward to the 2020-21 season as the national championship was scheduled to be hosted in their hometown of Thunder Bay. However, the Scotties, as well as the Tim Hortons Brier in Kelowna, B.C., where both moved to the bubble due to the global pandemic. Thunder Bay will now host the Scotties in 2022.

Playing in this year's Canadian championships will be a significant commitment for any team participating given the extra restrictions while competing in the Calgary bubble and a possible quarantine period upon their return home.

Earlier this month, Curling Canada announced Markin MacPhail Centre at WinSport’s Canada Olympic Park in Calgary will act as a hub for major curling events this season, including the Scotties, Brier, World Men's Curling Championship and Canadian Mixed Doubles Curling Championship. The Grand Slam of Curling is also hoping to host a pair of events in the Calgary bubble following the Season of Champions events. It's all expected to start in February with the Scotties and wrap up in April or May with the Grand Slams.

McCarville, 38, has made eight career appearances at the Scotties in her career, half of which as a representative of Northern Ontario. McCarville's current foursome have been together since 2015 and have made the playoffs four straight times, losing to Alberta's Chelsea Carey in the 2016 final.

They fell to Ontario's Team Rachel Homan in the page 3 vs. 4 playoff last year in Moose Jaw, Sask.