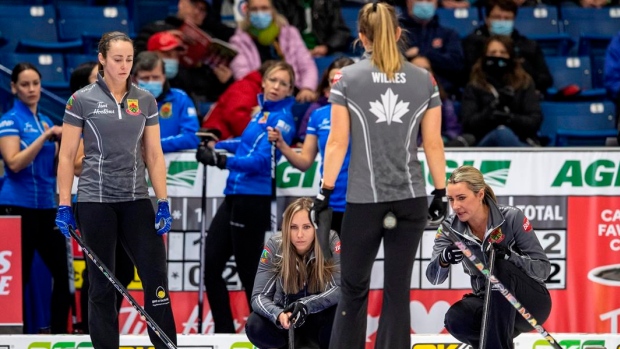 A much-anticipated Olympic decision. A national championship berth hanging in the balance. A provincial backup team waiting in the wings.

Rachel Homan, her teammates and other affected players could only wait things out after the Ontario Curling Association added a fresh wrinkle to a long, unprecedented selection process on several fronts due to the COVID-19 pandemic.

The OCA's decision Friday to announce that Homan's team would only represent the province at the national championship if the skip wasn't picked for the Olympic mixed doubles team generated criticism from some corners and confusion from others.

It also raised eyebrows at the prospect of Homan's teammates – Emma Miskew, Sarah Wilkes and Joanne Courtney – potentially being ruled out by the association through no fault of their own. Rather than let the team play with a substitute, the OCA declared that Team Hollie Duncan would get the nod as Team Ontario if Homan were not available.

Courtney, reached Saturday in Edmonton, said the team was "definitely surprised" at the association's "contingency plan."

"Really disappointed," she said. "A lot of emotions yesterday. It has been tough to take. Obviously we appreciate that it's hard for everyone. Selection is never an ideal situation for any team."

With the regular playdown process wiped out, Curling Canada will pick a pairing – in consultation with Own the Podium and the Canadian Olympic Committee – to wear the Maple Leaf at the Feb. 4-20 Beijing Games.

An announcement on the selection is expected sometime next week. Homan and John Morris, who teamed with Kaitlyn Lawes to win gold in the discipline's Olympic debut in 2018, are considered strong contenders.

The OCA cited the Canadian Team Ranking System (CTRS), strength of field data and competition history in its final decision. Homan's team is ranked fifth in Canada, just a few points ahead of Duncan.

"Our mindset, thinking if we were to be selected and if Rachel were to be made unavailable, we would have been thrilled to choose one of the top Ontario curlers," Courtney said. "We'd have them come into the lineup and see how far we could go and see what we could do. Playing in the Scotties is one of the biggest thrills."

Duncan, meanwhile, said it has been a "roller-coaster of emotions" over the last week.

"Obviously you want to win your province and earn your way there but if we were given the opportunity to represent Ontario we would be extremely honoured and excited," she said in a text message.

"Hopefully the decision about mixed doubles doesn’t take too much longer."

In its news release, the OCA did not provide details on why Team Homan could not use a sub or alternate player if needed.

However, in an email exchange later in the day, OCA executive director Stephen Chenier said the Homan rink would fall behind Duncan by a "significant amount of points" if they brought in a replacement.

Essentially, Chenier said, points were earned by the team as a whole but if a player were to leave, they would take their rankings points with them.

"In this case with such a close race is it fair to Team Duncan that Team Homan gets to field a different squad (than) what earned the points," Chenier said in an email.

For a team to count CTRS points toward its total, it must have at least three of four registered players on the ice at events.

Third-ranked Laura Walker, who has subbed on Homan's team in the past, weighed in on the issue via Twitter.

"So if Rachel got sick or injured before the Scotties, @TeamHoman could still play with 3/4. But if she goes to represent our country, they can’t? I’m confused. Aren’t there 4 people on a curling team?" she tweeted.

"Congrats on the Scotties berth…kinda? Nice position to put a player in," he tweeted.

While rare, substitute players are occasionally needed at big events.

One notable example came at the 2018 Scotties Tournament of Hearts. Team Jennifer Jones brought in Shannon Birchard at vice to replace Lawes, who was competing at the Pyeongchang Olympics.

Jones won the competition and Lawes later returned to the lineup to help the team win world gold.

Homan and Morris, meanwhile, are fifth in the Canadian mixed doubles rankings but both have Olympic experience.

Jocelyn Peterman and Brett Gallant are ranked No. 1 in Canada but they are already Beijing-bound after victories in the four-player team trials (with Team Jennifer Jones and Team Brad Gushue, respectively).

Curling Canada rules prevent athletes from playing in both disciplines at the same Games.

Jones and Brent Laing are ranked second ahead of Nancy Martin and Tyrel Griffith and the duo of Lisa Weagle and John Epping. Weagle is part of Jones's five-player team but is eligible for mixed doubles since she's listed as an alternate for Beijing.

Another potential contender is the duo of Kerri Einarson and Brad Jacobs. Einarson, who won the Canadian mixed doubles title last season with Gushue, had planned to play the trials with Jacobs.

"With mixed doubles getting cancelled, we've all been hoping and supporting and really staying excited for Rachel," Courtney said. "We want her to go to the Olympics. That would be such a thrill.

National sports organizations must submit their lists of nominated athletes to the COC by Jan. 19.