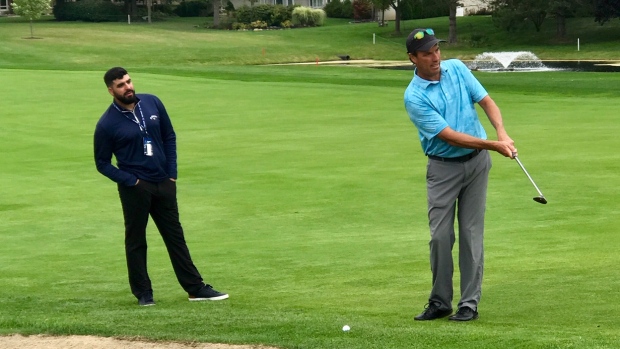 Golf’s professional tours are on a break and courses in Canada and elsewhere are either waiting for warmer weather or trying to understand if it’s safe to open.

But golfers, both world class and average duffers, are still seeking ways to improve their swings. And some of Canada’s top teachers are finding creative ways to deliver their lessons.

Ralph Bauer is one of Canada’s top instructors, working with PGA Tour players such as Adam Hadwin, Jhonattan Vegas and Kyle Stanley, as well as a slew of up-and-coming professionals including Canadian Adam Svensson, who plays on the Korn Ferry Tour.

Because of the diverse locations of his students, he often utilizes technology to give them instruction. In the past, that’s primarily involved his players sending videos of their swings and then discussing and analyzing it over the phone.

Now he’s moving to the next step and using FaceTime for his teaching.

Bauer believes that while face-to-face teaching will remain the best way to help out a player, this is likely the way of the future for the majority of his work.

“This is speeding up the process of instruction,” stated Bauer. “I don’t have to be right there to help them out.”

It’s not just his elite clientele that is going to benefit from his move to FaceTime. He’s also taking this work to the masses, starting to offer lessons to everyday golfers. He believes that while the present pandemic makes this a necessity, it could become the norm in the future.

“You can talk to them, give them direct communication,” stated Bauer. “You can watch them hit shots and see if they are getting what you’re teaching them.”

FaceTime is the next logical step in teaching through technology. First was the packaged lesson, where a noted instructor offered help on a pre-recorded medium such as a DVD or videotape. The giants of instruction, like Butch Harmon or Hank Haney, offered a one-size-fits-all type of experience.

Another is a website where help for a specific fault, say slicing drives or chunking chips, could be accessed.

More recently, there has been a surge in a back-and-forth process where a student records his or her swing and sends it to an instructor who returns specific help for the golfer.

One of the leaders in that area is Montreal teacher Shauheen Nakhjavani, who has given thousands of lessons with this method.

The benefits of the system are that teachers such as Nakhjavani, who also has a significant stable of tour players including Stephen Ames, are able to work with a large number of students and, as long as they have the swing video, they can give help at any time, not having to be present at the same moment as the student.

In his process, players send Nakhjavani two swing videos – one from behind and one face on. Nakhjavani reviews them and sends back three different videos. One is a voiceover critique of the current swing; the second is Nakhjavani on camera illustrating the faults of the swing and what they need to change; and the third is him showing drills to make the corrections.

“It’s really all about telling people what the issue is, what the cause of the issue is and how to correct it,” he said. “I want to give players the ability to self-correct.”

While there may not be any professional golf on the horizon any time soon, Nakhjavani is still seeing a steady flow of regular golfers interested in improving.

“If anything, players are a little more committed to making bigger, macro swing changes that they were hesitant to do mid-season,” he said of the present landscape. “The type of lessons have changed but not necessarily the quantity.”

No matter the technology in use, teaching golf is changing, and possibly being pushed into that area due to these strange times.

“I guess necessity is the mother of invention,” stated Bauer. “I think these less traditional methods of golf lessons are going to become very popular.”