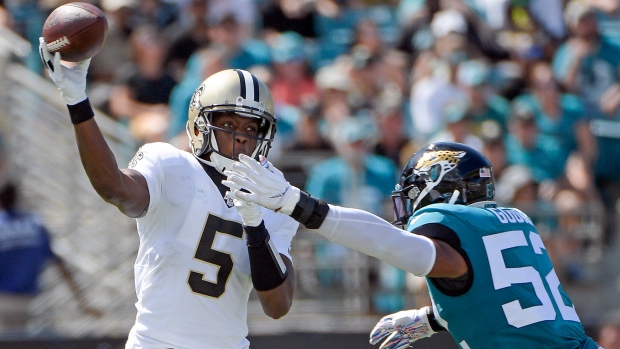 Rookie quarterback Gardner Minshew was harassed, hurried and humbled in a 13-6 loss to the Saints on Sunday, his worst performance of the season coming just a few hours after Pope Francis accidentally tweeted support for the visiting team.

"Today we give thanks to the Lord for our new #Saints," Pope Francis tweeted. "They walked by faith and now we invoke their intercession."

The hashtag and capitalization inadvertently added the Fleur de Lis, the emblem associated with the Saints and worn on their helmets. It was widely regarded as a good omen for New Orleans.

The Saints (5-1) took it from there, holding Minshew without a touchdown pass for the first time in six games and limiting the Jaguars (2-4) to a season-low 226 yards.

"I told our defence I felt like if they played eight quarters they were not going to score a touchdown today," Saints coach Sean Payton said.

The Saints retweeted the pope after their fourth consecutive victory, saying "Couldn't lose after this. #Blessed and highly favoured."

New Orleans kept Minshew in the pocket while still getting pressure and did an equally impressive job on the AFC's leading receiver, DJ Chark. Marshon Lattimore shadowed Chark and got safety help over the top. Chark managed three receptions for 43 yards against bracket coverage.

Minshew, who threw for 374 yards last week, finished 14 of 29 passing for 163 yards and an interception. He was sacked twice and scrambled two times for a yard.

"It's just about showing different looks, trying to confuse him into throwing us the ball," Saints cornerback Eli Apple said. "He did that in the second half."

Teddy Bridgewater delivered the decisive play in a defensive game. He found Jared Cook for a 4-yard touchdown early in the fourth, putting the Saints ahead for good and helping them improve to 4-0 without injured star Drew Brees.

Coming off a 300-yard, four-touchdown performance against Tampa Bay, Bridgewater was less effective against the Jaguars. He missed wide-open receivers Michael Thomas and Ted Ginn for would-be touchdowns.

But he did enough for New Orleans' defence, which turned Minshew Mania into mush.

The worst outing of Minshew's young career came on the same day the team, in conjunction with the NFL, handed out 30,000 "Minshew moustaches" as fans entered the gates.

"It was a tough day; they're a good team," Minshew said. "I missed some balls I can't miss."

With the pope tweeting about the Saints, what chance did Minshew really have? It didn't help that he played with a sore groin and a brace on his left knee.

Minshew sat slumped in the bowels of the stadium, grass stains covering his white pants, a hole ripped in his undershirt and a smoothie in hand. But he made no excuses.

"We've got enough guys to make plays and we're going to do better," he said.

Saints linebacker Demario Davis delivered a knockout hit on tight end Geoff Swaim in the fourth. Swaim was seemingly unconscious as he hit the ground. Team trainers and paramedics rushed to his side. Davis knelt next to Swaim and removed his helmet.

Swaim eventually walked off the field without assistance. He was placed in the league's concussion protocol.

"I know he was able to walk off the field, but you don't know what the residuals are," said Davis, who grew up in the same Mississippi city as Minshew. "It's a bang-bang league. Sometimes those unfortunate hits happen, and we don't like them."

Jaguars cornerback Jalen Ramsey was inactive for the third consecutive week because of an apparent back injury. Ramsey was ruled out three days after owner Shad Khan said he expected the disgruntled defender to play against the Saints.

Jacksonville recognized more than 80 former players before the game and honoured the team's top 25 players from its 25 years of existence at halftime. Left tackle Tony Boselli, running back Fred Taylor and receiver Jimmy Smith got the biggest ovations during the ceremony.

Jacksonville kept rookie linebacker Quincy Williams on the bench. Williams was taken out in the fourth quarter of last week's loss at Carolina. The third-round draft pick was out of position on many plays as the Panthers ran for 285 yards, the second most in Jacksonville's history. Veteran backup Najee Goode started in his place.

Saints running back Alvin Kamara tweaked a knee late but is expected to be fine. ... Jaguars receiver Marqise Lee, who missed all of last season after tearing three ligaments in his left knee, injured his right foot/ankle in the third quarter and had to be helped to the locker room. ... Jaguars cornerback D.J. Hayden left in the fourth and was evaluated for a concussion.

Saints play at Chicago next Sunday. New Orleans has won the past four meetings.

Jaguars play at Cincinnati next Sunday. The Bengals have won four of the past five meetings.