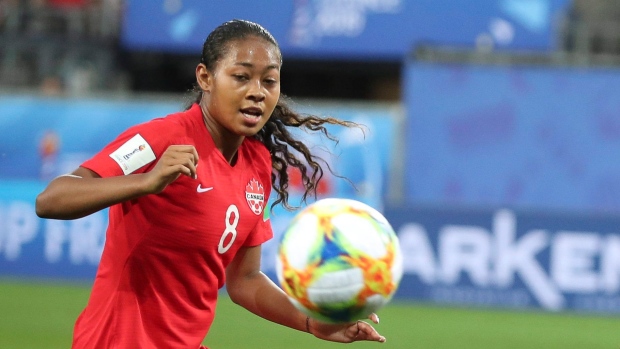 PARIS — In her first senior start for Canada, against Nigeria in April, Jayde Riviere was clattered in a tackle in the first half.

The 18-year-old from Pickering, Ont., had been dealing with an injury for a while and the collision sent shockwaves through her entire lower body. But the pain and frustration turned into a learning moment when a teammate offered some words of wisdom at halftime.

She told Riviere she was facing "a now-or-never decision."

"Because at the time we were preparing for the World Cup. Moments like this can happen (at the World Cup) and it can define a game through that moment," Riviere recalled. "So I think that (advice) really really impacted me."

She pushed through the pain and her crosses set up second-half goals by Janine Beckie and Sophie Schmidt in a 2-1 win.

"Just because I'm the youngest it doesn't mean that I can only be a 45-minute player," said Riviere. "I think there's more I can bring."

Canada coach Kenneth Heiner-Moller clearly agrees. He started the teenager against New Zealand at the World Cup and liked what he saw.

"That was impressive, eh? How old is she? Eighteen. That was quite a debut in a World Cup," he said after the game.

"She's got a bright future in front of her," he added.

Despite coming into the tournament with just five caps, Riviere has not looked out of place in France. The young fullback/wingback acquitted herself well in fifth-ranked Canada's 2-0 win over No. 19 New Zealand and replaced Allysha Chapman in the 69th minute of the 2-1 loss to the eighth-ranked Dutch.

"I feel blessed that Kenneth believes in me," said Riviere.

Count captain Christine Sinclair, who scored her first goal for Canada some 10 months before Riviere was born, as a fan.

"She's incredible," the 36-year-old Sinclair said after the New Zealand game. "She's fearless. That's the word that comes to mind when I think of Jayde. I think she found out yesterday she was starting. All I told her was just to breathe and enjoy it. And she went out there and just played the way she does every single day ... The sky's the limit for her."

The 30-year-old Chapman remains the starter at left fullback but Riviere, a former winger, provides a more attacking option if Heiner-Moller wants to go to a 3-5-2 formation as he did early in the match against New Zealand.

Riviere says it helped that several of her teammates came up to her before her World Cup debut to say they had her back.

Riviere is one of three 18-year-olds on the World Cup roster. Jordyn Huitema started against the Dutch while midfielder Julia Grosso had yet to play going into Monday's round-of-16 match against the ninth-ranked Swedes.

Riviere played in her native Pickering and Markham, Ont., before moving to Vancouver to join the Whitecaps FC Girls Elite Super REX program in August 2017. She spent a year on the West Coast before returning home to finish high school.

The University of Michigan will be her next stop. She committed when she was 14, drawn by the high level of the Wolverines' academics and athletics plus the team spirit. Ann Arbor also is close to home.

Riviere says she had full scholarship offers from 28 schools. She narrowed her choice to Michigan and West Virginia, which was home to fellow Canadian internationals Ashley Lawrence and Kadeisha Buchanan.

Riviere was 14 when she made her debut in the Canadian youth program in 2015 under coach Bev Priestman, now an assistant coach with the England team.

"Uruguay World Cup was, hands down, probably one of the most enjoyable experiences I could have had. I never really get to play with my own age group ... I got to be the oldest," she said.

Under coach Rhian Wilkinson, the young Canadians beat Germany en route to the semifinals before losing to Mexico and New Zealand to finish fourth.

While Riviere's senior resume is short, it is star-studded. She made her debut off the bench in November 2017 in a 3-1 loss to the top-ranked U.S. She remembers it as a nerve-wracking first appearance, given it was on the road in San Jose, Calif., and Canada was trailing when she went in.

Riviere was apprehensive when she first came into the senior camp. Young players, she knew, can be seen as threats to other players' jobs.

But her comfort level has grown along the way.

"They're definitely not what I imagined them to be like," she said of the senior squad. "They're so welcoming. Allysha Chapman, she has helped me so much ... Even though I sub her off to become an impact player, she still helps me to be the best fullback that I can be.

"Because I think she looks long-term. It's not just about her, it's about the team and the future and where the team's going to go," she added.

Riviere started as an attacking midfielder, but was converted to a winger by Priestman in the Canadian under-15 ranks. It was only in 2017 that she started training as a fullback under then-coach John Herdman.

Riviere's mother, who is in marketing, is from Hong Kong. Her father, a Toronto police superintendent, is originally from Dominica.

Riviere was eight or nine when her dad, a former soccer player himself, told her she could have a normal life or accept "an athletic challenge."

"I picked that life ... When you're young, you want to have parties, go to sleepovers. I didn't do any of that stuff. It was always every day I was out at the local field near my house and I was just with my dad and we were doing shooting drills repetitively. We were just grinding out every day."

Riviere was playing with the Pickering soccer club at the time. But the training didn't end there.

"It ended when my dad said it ended."