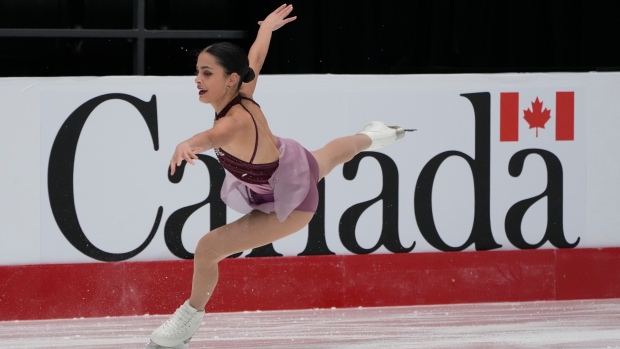 It took 19 tries for Keegan Messing to finally claim a national title.

In a cruel twist due to COVID-19, it's the first national championship his mom Sally -- who was born in Edmonton, thus is the reason Messing skates for Canada -- had ever missed.

"A little bittersweet there," Messing said.

Skating in a virtually empty TD Place Arena due to the pandemic, the 29-year-old from Girdwood, Ak., won the men's title at the Canadian figure skating championships on Saturday, all but clinching his berth on the Olympic team for Beijing.

"It's an Olympic year, I think I might have got more points if you counted the butterflies in my stomach," Messing said with a laugh. "I forgot what it's like to go out on Olympic qualifying ice, and whoa, man, it's another ballgame out there."

Dressed in a plaid flannel shirt and jeans, Messing took the ice after an excellent performance by Roman Sadovsky. Skating to "Home" by Phillip Phillips, a tribute to his infant son Wyatt, Messing landed a pair of quads en route to scoring 258.03.

Sadovsky, a 22-year-old from Toronto, moved up from fourth after the short program to take silver -- and likely Canada's other men's berth on the Beijing team -- with 247.60.

"I kind of carried a little bit of that disappointment from last night and used that as energy going into today," Sadovsky said. "Basically from the end of last night I was on a mission to a much better skate and to prove that I’m a better skater than what I performed yesterday... I’m proud of myself."

Messing's victory capped a roller-coaster week that included 33 hours of travel and the temporary loss of his skates. But his week wasn't as rough as his good friend Nam Nguyen's. The 2019 national champion struggled to sixth, revealing after that he'd had COVID-19 last week, and was still feeling the effects.

COVID-19 has cast a pall over sports, with the surge of the new Omicron variant. Stephen Gogolev, who won silver at the 2019 nationals, withdrew on Friday after he tested positive in a PCR test upon landing in Ottawa.

Moments after clinching her first Canadian title, Schizas was asked about her goals for Beijing.

"My biggest goal is to avoid catching COVID," Schizas said. "That’s my biggest goal, for the next three weeks I’m going to do everything in my power to stay healthy."

Skating to Puccini's "Madama Butterfly," and dressed in dusty blue - with a sequined COVID-19 mask that she wore in the warm-up to match - the skater from Oakville, Ont., wasn't flawless in Saturday's free skate. But with a 12-point cushion from Friday's short program, her total score of 198.24 was good enough for gold and to all but clinch her spot on Canada's Olympic team.

In ice dance, Gilles, from Toronto, and Poirier, from Unionville, Ont., secured their second trip to the Olympics with a stirring and virtually flawless performance to "The Long and Winding Road," scoring 219.24 overall.

"We were a little nervous competing at nationals," Gilles said. "We've made so many changes since the Grand Prix series. Just kind of testing out the waters a little bit. Kind of like: remember to do this, remember to do this. Nothing’s on auto-pilot yet."

Gilles and Poirier had qualified for the Grand Prix Final last month, but it was cancelled as COVID-19 cases started to rise around the world amid the Omicron variant -- a silver lining of sorts, as it gave them time to rework their program ahead of Beijing.

Moore-Towers, from St. Catharines, Ont., and Marinaro, from Sarnia, Ont., scored 212.54 to win their third pairs title. It was a triumphant comeback after a rocky first half of the season, and Moore-Towers fought back tears when they struck their final pose.

"We're ecstatic," she said. "It wasn’t perfect but it's leaps and bounds ahead of what we’ve done this season. Our goal was to go into Beijing as Canadian champions. This is mission accomplished for us."

"I think we officially parked (the struggles) in the past with two performances that we're happy with," Marinaro added. "We have stuff to work on in the short and the free that we’ll be dialing in over the next three weeks but some rebound performances we’re definitely extremely, extremely happy with.

"Now we’ve got three weeks to build, and stay COVID-free."

Evelyn Walsh and Trennt Michaud were second with 186.52, while Deanna Stellato and Maxime Deschamps took the bronze (178.60). Vanessa James and Eric Radford, who both contracted COVID-19 a couple of weeks ago, withdrew from Saturday's free skate.

"We would have loved to have the opportunity to compete against the whole event," Moore-Towers said of the absence of James and Radford. "I think that would have really been the cherry on the . . . what do you say, the cherry on the cake? The ice cream? But yeah, this one is special for sure."

James and Radford, who were fourth after the short program, are still eligible to be selected for one of the two pairs berths on the Olympic team based on previous results this season, but the solid skate by Walsh and Michaud surely will make for a difficult decision.

For Schizas, Beijing was barely on her radar until she finished 13th at the world championships last spring.

"I am a very logical person," she said. "Realistically one person is going to Olympics and the chances it was going to be me were very slim. Obviously now that I’ve won a Canadian title the Olympics are on my radar but I never like to get too far ahead of myself. I think one moment at a time and I think that makes it even better qualifying.

"In a way I don’t think people expected it to be me," she added. "I’m from a smaller club (Milton Skating Club), a smaller community. I don’t have coaches who have necessarily done this before. We have a really great relationship and I just won my first national title."

Because of safety concerns and provincial crowd restrictions due to the recent COVID-19 surge, the event was held in front of no fans at TD Place Arena.

The Beijing Olympic figure skating team will be announced Sunday. Canada has one berth in women's singles, two in pairs and men's singles, and three in ice dance.