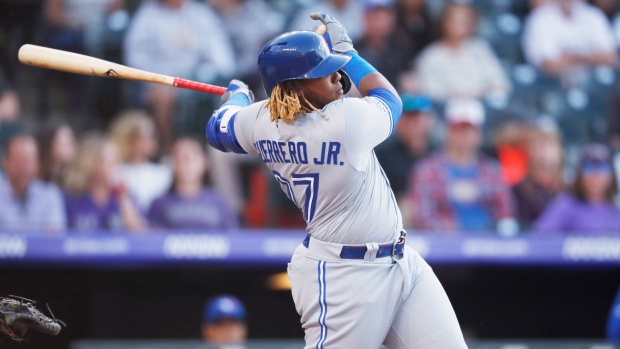 NEW YORK — Twenty-three games under .500, the Toronto Blue Jays start the second half in an expected hole that was dug long ago.

It won’t get any better in terms of the standings. In fact, it could get worse if the trade deadline exodus goes according to plan over the next couple of weeks.

Even though it’s not all doom and gloom — the emerging youth in the lineup is a reason to watch this ball club in the second half — the next two-and-a-half months is still all about answering internal questions heading into 2020.

And there's no shortage of questions all over the roster.

While some of the big picture questions — like how to go about rebuilding a bare bones pitching staff or what GM Ross Atkins will spend in free agency this winter — will take time to answer, but there’s also a whole lot of immediate issues to sift through on the ball club currently taking the field each and every day.

Here are 10 questions that the front office hopes to answer prior to October:

This one is going to be answered pretty quickly.

Starter Marcus Stroman and closer Ken Giles should be on the move as Atkins would love to cash in his two most valuable trade chips sooner rather than later.

But with another year of team control remaining on both, there’s technically a possibility that he could decide to hold off until the winter if he doesn’t like what the market has to offer.

That would be a surprise — and likely a mistake — but it’s not like this regime hasn’t been late to the party before.

Once you get past those two, first baseman Justin Smoak, shortstop Freddy Galvis, utility infielder Eric Sogard and reliever Daniel Hudson could all be of interest to contenders.

Is it worth keeping Smoak around?

The 32-year-old free-agent-to-be is without a doubt on the block, but the market for corner bats, especially those limited to first base or DH, has been ice cold for a couple of years now.

It seems the Blue Jays have been happy enough with Vladimir Guerrero Jr.’s defence at third base to commit to him there for 2020, leaving first base without an obvious internal solution.

Rowdy Tellez has shown power, but he’s carrying a .281 on-base percentage into the second half and doesn’t look like any sort of solution.

There aren’t many contenders around baseball looking for a first base upgrade, so keeping Smoak, a familiar face and a positive clubhouse presence, and giving him a one-year extension might make some sense.

But that’s only if there’s no trade market and the potential prospect coming back doesn’t move the needle enough.

Fresh off putting on a show for the ages in the Home Run Derby at the All-Star Game in Cleveland, many expect Guerrero to carry that momentum into the second half.

While there’s a whole lot of room for improvement for the former top prospect in baseball, the 20-year-old is already learning that it’s really hard to hit MLB pitching, so nothing will come easy.

The advanced numbers say he’s hitting too many ground balls and the launch angle hasn’t been right, while the traditional scouting report is saying he’s being pitched to like a veteran and simply hasn’t made all of the adjustments needed.

He is a rookie after all, and seems to be pressing, trying desperately to make an impact in each at-bat.

Currently, he’s not even one of the favourites to win rookie of the year, but that can all change with a hot stretch that we all know he’s capable of.

This much is certain: The transition hasn’t been as seamless as expected.

Can Randal Grichuk find another gear?

Sure, the power has been there with 15 home runs, but the 27-year-old has looked almost exactly like the player he’s been for his entire career.

The one reason to hold out hope is that Grichuk has always been a second-half player, putting up an .865 OPS over his career in the second half, compared to just .716 prior to the all-star break.

Who’s the centre-fielder of the future?

At this point, it seems the Jays have figured out two-thirds of their outfield for 2020.

Grichuk and his newfound riches will be in right field, while Cuban Lourdes Gurriel Jr. has impressed both with the bat and the glove in left field.

But centre-field is a different story altogether.

Teoscar Hernandez has been given an opportunity to play extensively and while it’s quite obvious he’s not an everyday option in the middle for a winner, the big issue is that he hasn’t really hit, either.

Once you take a look at the organizational depth chart, it becomes clear the Blue Jays do not currently have their centre-fielder of the near future in the system and it will have to be addressed via trade or free agency.

Whether that’s an outfield prospect coming back in a deadline trade this month or a free-agent foray this winter remains to be seen.

Is Anthony Alford still a part of the long-term plan?

Which brings us to this man.

Alford’s prospect stock has dropped so much over the past two years that the soon-to-be 25-year-old is now almost considered a reclamation project than any sort of certainty, let alone a building block.

When he’s been healthy, he hasn’t hit. But he’s usually hurt, as is the case right now, not having played for Triple-A Buffalo since June 23.

In addition to the bat failing to develop, many within the organization see him as a corner outfielder at the major-league level.

It’s too early to give up completely, but Alford is just a lottery ticket for now.

Can Aaron Sanchez turn his season around?

As this is being written, Sanchez is scuffling once again against a tough lineup in the Bronx, putting a damper on the positive strides he made in his last outing prior to the all-star break.

Along with trouble finding the zone, especially getting ahead of hitters, Sanchez has been getting lit up the second and third time through a batting order, which is the exact opposite of what you need a starting pitcher to do.

Forget about Sanchez having any trade value. Even though there has been interest, it’s simply teams trying to buy extra low on a talented arm and hope they’re the ones who can find a fix.

With too much service time to be sent to the minors without agreeing to the move, the bullpen is an option, but the Jays are more likely to ride out the clunkers and hope things turn around in the second half.

It’s not like they have a bevy of rotation options to turn to.

A couple years of finger injuries, and a pair of ill-advised surgeries, have taken a toll. There’s no easy fix.

What kind of impact will Bo Bichette have when he arrives?

Once the trade deadline dust settles, the third bloodline player that’s had fans so excited over the last couple of years should be ready to arrive.

But as we’ve seen with Vladdy Jr., the jump from Triple-A to the majors is the toughest one of all, and Bichette may endure some growing pains.

There will be flashy games, but it could take some time for the 21-year-old shortstop to adjust on both sides of the ball, which is exactly why the Blue Jays would like that process to start as soon as possible, rather than keep him down until next April.

Who’s the closer in the second half when Ken Giles is traded?

Not that it matters who’s closing for a team buried in the standings, but there may be open auditions for the ninth inning for the foreseeable future.

Those of you looking for saves in fantasy leagues, take note. Some teams that trade closers have a ready-made option to turn to.

That is not the case here.

Joe Biagini and Daniel Hudson would likely share the role — assuming they’re not dealt, as well — with veteran David Phelps also a candidate.

Tim Mayza has good enough stuff, but he’s better suited for a setup role as a lefty.

If you’re looking outside the box, maybe a young arm like Jordan Romano, Justin Shafer or prospect Zach Jackson, who has limited opponents to just 29 hits across 44 innings in Triple-A, pitches well enough down the stretch to somehow get a look in the role.

Which player wins a 2020 job with a strong second half?

If things go as expected, there won’t be many jobs for position players up for grabs.

Three of four infield spots for 2020 look set, and Danny Jansen is the man behind the plate.

Centre field and DH could be wide open, but the real intrigue is in the rotation.

With Stroman’s days numbered, it could be a rotating cast of characters taking the ball for the Jays over the next couple of months.

Perform well and you get to keep taking the ball. A lack of results will mean someone else gets a chance.

The one name to watch is Double-A right-hander Patrick Murphy, who worked through an illegal toe-tap issue and came out on the other end throwing a bit harder and still getting results. The mechanical change has delayed his arrival, but he’s already on the 40-man roster so it would be an easy call-up if he continues to pitch well.

If Stroman is indeed dealt, the rotation would be made up of Sanchez, Trent Thornton, Clayton Richard and the rehabbing Ryan Borucki, who could make his season debut in the next 10 days.

In addition to anyone close to major-league ready acquired in deadline deals, T.J. Zeuch, Julian Merryweather, Thomas Pannone, Sean Reid-Foley and Jacob Waguespack will all get looks.

A little further down the pecking order alongside Murphy in Double-A are Yennsy Diaz and Hector Perez, who are both on the 40-man, as well.