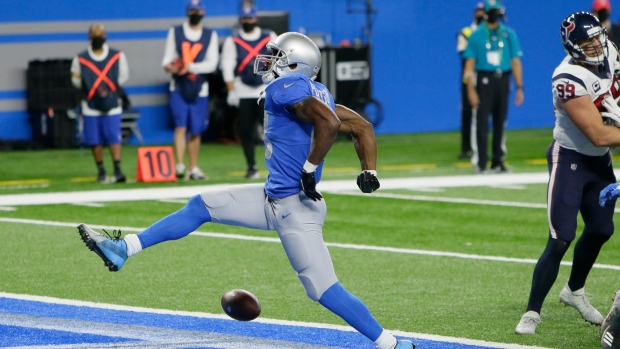 The Tennessee Titans are replacing one 2,000-yard running back with another.

With Derrick Henry set to undergo foot surgery Tuesday without a timeline for return, the Titans are signing veteran Adrian Peterson, according to ESPN's Adam Schefter. Schefter adds that Peterson will first be signed to the Titans practice roster, with the expectation he'll be promoted to the active roster.

Peterson, a free agent, spent last season with the Detroit Lions, rushing for 604 yards and seven touchdowns over 16 games. A seven-time Pro Bowl running back, Peterson last crossed the 1,000-yard mark with the Washington Football Team in 2018.

Henry joined Peterson as one of just eight running backs in NFL history to rush for 2,000 yards in a season last year.

Henry, who leads the league in rushing by more than 350 yards this season, had 28 carries for 68 yards in Sunday's win over the Indianapolis Colts, brining his rushing totals to 219 attempts for 937 yards and 10 touchdowns this season. Henry also has 18 catches for 154 yards for the Titans, who improved to 6-2 in Week 8.