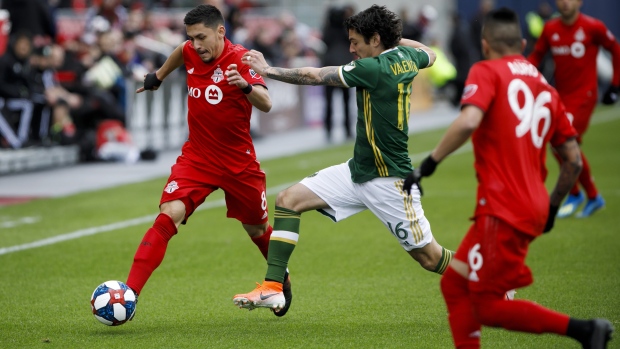 Marky Delgado has now publicly placed his chips in the middle of the table.

It is a decision many professional athletes contemplate. New contracts are signed every day in the sporting world, usually at the end of a negotiating period. Some negotiations are harder than others, and during that complicated process players and their agents work hard to get the amount of money they feel they deserve.

The majority of these discussions are held in private, but sometimes athletes feel compelled to share. The Toronto FC midfielder decided this week he wanted to talk about his negotiation publicly.

It began with a tweet and five words written on Jan 30 that simply said “Final year let’s enjoy it."

Responding to that in a sit-down interview with TSN this week, the 24-year-old elaborated: “It’s definitely my final year with the club,” he said before clarifying: “Final year with my contract at least. We are talking. Things may extend and I might be here a lot longer, but if not, this is my final year. I am ready to put everything out there and enjoy it.”

Delgado used the word ‘definitely’ when asked if there was a realistic chance of 2020 being his last year in Toronto, saying Europe has always been a place where he’d like to challenge himself.

This is nothing new. Major League Soccer is full of players who would like to test themselves in that environment. Many executives across the league do not see this as a negative, choosing instead to believe this is a sign of ambition that can drive the player and club in unison.

Throughout that process they know, however, there is a fine line. On the field, evaluations of the player are done knowing his head could be elsewhere. If the two sides aren’t close to agreeing a new contract, often that player can be replaced in the team by someone the club is rightly more invested in.

This happens a lot in football – even if the case of the player looking elsewhere isn’t public knowledge. If a player goes public about this there are often other motives at play, like trying to push through a move or accelerate the process of a new deal.

Delgado seems open to either scenario.

“Anything can happen,” he said. “I’m in contact with my agent. I have other clubs interested in me. I’m also ready for a new opportunity as well. I’m not scared to go anywhere else and take a new challenge, whether that is here and continue to make history with this club or going somewhere else and changing the culture a little bit.”

Delgado has been an important member of Toronto FC’s side for the past three seasons. During that time he’s seen players like Alex Bono, Chris Mavinga, Justin Morrow, Jonathan Osorio and Eriq Zavaleta re-sign with the club for more money on non-designated player contracts. He clearly believes he should be next, but his decision to go public is a test Toronto FC need to tread carefully with.

The club found themselves in the middle of a storm one year ago when designated players Sebastian Giovinco and Jozy Altidore spoke publicly about their desire to get new deals with one year left on both of their contracts. Giovinco’s agent found another team that was willing to pay him more to help boost his earnings in negotiations. That eventually became too tempting for the player and too much for Toronto FC and the Italian left for Al-Hilal in Saudi Arabia.

With Giovinco gone, the club decided they couldn’t afford to lose both of their star forwards and re-signed Altidore to a new four-year deal while opting to wait until the end of the season to come to a new deal with Michael Bradley.

Although many inside the club felt it was close to a foregone conclusion that they would re-sign their captain, it still took up much of president Bill Manning’s attention for a month after MLS Cup in Seattle. During that month, Manning and others inside the club took great pride in how both sides of the negotiations were handled privately and how Bradley stuck to his word about never commenting about his status throughout the 2019 season. This is how they believe business should be done.

Delgado credits his midfield partner for much of his development at Toronto FC, but with his latest comments has decided to go a different route to Bradley when it comes to discussing his future.

The biggest question now is: What does Toronto FC do next and how does this affect them going forward?

Altidore’s recent criticism of the club over the way they handled Bradley’s off-season recovery from an ankle injury did not sit well with upper management, but the striker was not interested in backing down from those comments when he talked to TSN this week.

“I’m here first for my teammates and the fans. That’s where my loyalty lies,” Altidore said. “I wear my heart on my sleeve. I back my teammates because those are the ones I go into battle with on the pitch. That will never change. I have no regrets about backing my guys or doing what I think is best for the fans to make sure we have the best possible team to win championships. Sometimes you have to tell it like it is. I think players should have that right and not be taken out of context or disrespectful because I wouldn’t have been here six years if I didn’t love this club, the fans and these players.”

It’s an interesting look into the mind of Altidore. Many fans of the club, who clearly have a special relationship with him, will treasure the unique candidness of what he has to say.

It is also an insight into the mind of a player who backs his teammates, and although some of the Toronto FC players will look at Delgado’s comments and think they wouldn’t have done it that way, it is unlikely to be any kind of distraction to the collective group on the field.

Off the field, things are very different. It is important to those running this club that they leave it better than they found it. Discussions about club culture and a 10-year plan happen regularly at the club as they attempt to become an organization that maintains high levels in every department that lead to success on both the sporting and business side. This inevitably leads to challenges in different areas that require different methods, something any business in 2020 is dealing with.

Warren Bennis, in his book Learning to Lead, argued against the command-and-control approach in modern business, writing: “Modern businesses need skills of orchestration, counselling, collaboration through self-examination, introspection, soul-searching, learning from failure and the cultivation of innate gifts.”

Chris Brady, professor of management studies and director of the Centre for Sports Business at Salford University in England, writing in Carlo Ancelotti’s book Quiet Leadership, argued: “Like many thesis on leadership, Bennis misses the point of the necessity of being able to employ a range of leadership techniques appropriate to the business and the owners. In moments of crisis, command-and-control is precisely the leadership style required and football management is a continual crisis-management profession.”

Command and control. While Toronto FC’s runs to three MLS Cup finals and a CONCACAF Champions League final in the last four years couldn’t have happened without command and control on the pitch, it’s clear it is needed off the pitch just as much.

It’s in these moments that club cultures are assembled and truly tested, where they either rise and meet challenges head on or allow players to continue to test them in public, time and time again.

‘All for One’ remains the club’s motto and they need to stick to that – on and off the field.