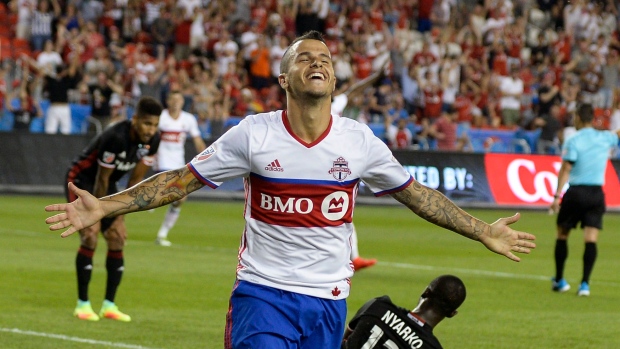 NEW YORK — Sebastian Giovinco has been voted Major League Soccer's player of the week after the star Toronto FC forward broke out of an eight-game scoring drought in spectacular fashion.

Giovinco, the reigning league MVP, exploded for three goals in a dominant 4-1 win over D.C. United on Saturday at BMO Field.

Giovinco started his third career MLS hat trick on free kick from 25 yards out in the 21st minute, curling a right-footed shot over the four-man wall for his first goal in 697 minutes.

The Atomic Ant scored on another free kick the 39th minute then completed his hat trick with a goal in stoppage time, sending a Mark Bloom cross into the back of the net with a right-footed volley from close range.

The Italian is third in the league in goals, trailing New York City FC's David Villa (13) and Montreal's Ignacio Piatti (12).