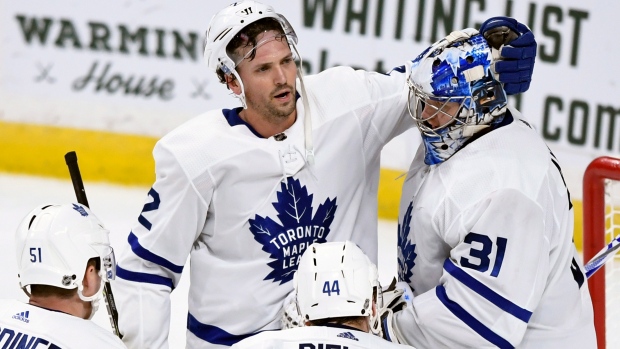 After finally signing William Nylander to a six-year deal on Saturday and with the return of star centre Auston Matthews to the lineup last week (four points in his first two games), the Toronto Maple Leafs are reloaded and ready to send shivers through the NHL with an even more lethal lineup.

Led by Mitch Marner’s 38 points – good enough for the No. 4 spot in the scoring race – and Frederik Andersen’s league-leading 15 wins in net, the Maple Leafs have won four straight as they continue a road swing that has them playing seven of their next eight on the road (they’re 10-3 away from Scotiabank Arena) following Saturday’s 5-3 win over the Wild in Minnesota.

Toronto, which our panel ranked first two weeks ago, moves up three spots to No. 1 in our weekly 7-Eleven Power Rankings, according to consensus rankings formulated by the TSN Power Ranking panel of Ray Ferraro, Jeff O’Neill, Jamie McLennan, Craig Button and Darren Dreger. The Leafs own the NHL’s third-best power play and are second in the overall NHL standings with 38 points, a point back of the No. 2 Tampa Bay Lightning.

The Lightning move up one spot after going 2-1-0 last week while the Nashville Predators drop one position to No. 3 after a 1-2-0 week. Last week’s No. 1 team, the Buffalo Sabres, slip to No. 4 after going 1-1-1 last week as their 10-game winning streak came to an end in Tampa. Rounding out our panel’s top five this week is the on-a-roll Colorado Avalanche at No. 5 after an impressive 3-0-1 record in their last four games.

The red-hot Anaheim Ducks make the biggest climb of the week, jumping 13 places after four straight wins, including rallying from a 5-1 deficit to edge the No. 7 Washington Capitals 6-5, to land in the No. 9 spot. The Minnesota Wild have the biggest drop of the week, falling seven places to No. 13 from No. 6 a week ago after losing three straight.

Aside from the top-ranked Leafs and the No. 6 Winnipeg Jets, the other top Canadian teams this week include the No. 8 Calgary Flames (rising two places from a week ago) and the surging Edmonton Oilers at No. 16, moving up five spots after going 3-0-0 last week under new head coach Ken Hitchcock, who is now 4-1-1 in Edmonton.

The Montreal Canadiens drop five spots to No. 18 this week while the Ottawa Senators rise six places to No. 22 after a 3-1-0 week. Canada’s worst team this week is the No. 29 Vancouver Canucks, who drop two spots after managing just one win in their last 12 games to sit among the NHL’s five worst teams this week. The Canucks acquired forward Josh Leivo from the Leafs on Monday and are hoping the winning pedigree he brings from Toronto will pay dividends on the West Coast.

The other struggling clubs this week include the New Jersey Devils at No. 27, the No. 28 Chicago Blackhawks, who have lost four straight and are just 3-8-2 under new coach Jeremy Colliton following the firing of Joel Quenneville last month, the Los Angeles Kings at No. 30, finally picking themselves off the basement floor after four straight weeks at No. 31, and the injury-riddled St. Louis Blues, who sit dead last this week after losing three of their last four.

A late goal in Minnesota gave the Maple Leafs their fourth consecutive win, outscoring their opponents 20-8 during the streak. William Nylander signed just before the deadline on the same night.

Louis Domingue has done the job filling in for Andrei Vasilevskiy, with a 7-3-0 record in his absence. It helps that the Lightning, winners of five of their last six, have averaged 5.2 goals per game in the wins.

Losing consecutive games at home is unusual for the Preds, although it should be noted they were sandwiched between seven wins. They’ve also had problems on the road, losing their last four (0-3-1).

A franchise-best tying 10-game winning streak finally ended with a 5-4 loss in Tampa Bay. Jeff Skinner led the way with 10 goals in the 10 games, and Jack Eichel led in helpers, also with 10.

Colorado’s current 11-game (9-0-2) point streak features a 6-0 record on the road and 4.0 average goals scored. Not once during the streak have they allowed more than three goals.

The Jets trailed 3-0 going into the third period against the New York Rangers on Sunday, but scored three times to tie it and then won in the shootout. They’ve won four of their last five games.

The Flames are on a 6-1-1 run since the middle of November. In the six wins they’ve outscored their opponents 30-11. In November, five players averaged at least a point a game in their 13 contests.

Cam Atkinson extended his point streak to 10 games (second to Ryan Johansen’s 13 in 2014-15) but they still lost their third game in their last four on the road. At home they’re on a 4-0-1 stretch.

Patrice Bergeron’s absence has had a negative effect on their goal scorers. In the six games he’s been out, David Pastrnak has two goals and Brad Marchand just one. The team has averaged 2.0 per game.

A stretch of seven of eight games on the road had a happy ending. After going 1-3 in the first four road games, they finished it off in Western Canada by going 2-0-1, with Ben Bishop returning for the win.

A three-game losing streak featured some poor third period play. They allowed a goal with 3:20 remaining to lose to Toronto, and allowed three third period goals in 5:32 in a loss to Arizona.

The Islanders made a triumphant return to Nassau Coliseum with a third period goal to defeat Columbus in front of a sold-out crowd on Saturday. They are 3-1-1 in their last five games.

It’s not difficult to see the influence of Ken Hitchcock on the Oilers. They have a three-game winning streak with scores of 1-0 in overtime, 3-2 and 2-1. Overall, they’re 4-1-1 under Hitchcock.

A five-game winning streak ended with a 2-1 loss in Edmonton. The Golden Knights outscored their opponents 23-8 during the streak and were led by Max Pacioretty’s six goals.

Shea Weber made a triumphant return to the Canadiens lineup with two goals in just his second game back in nearly a year. It helped Montreal to their first win in six games. Carey Price is 8-8-4.

A 4-2-1 current stretch can be traced to the goaltending of Curtis McElhinney. The waiver wire pickup (Leafs) won all four and has a 7-2-1 season mark to go with a .930 save percentage and 2.10 GAA.

The trade for Nick Schmaltz (1-3-4) appears to have helped their offence. They’re 3-0 since acquiring him from Chicago and have scored 13 goals. Adin Hill earned his first career shutout and is 3-0-0.

After allowing 23 goals in a four-game losing streak, the Senators are on a three-game winning streak, which includes a 6-2 welcome home win over former captain Erik Karlsson and the Sharks.

The Rangers have just one win in their last six games and were shut out twice. At home they’re 8-1-1 in their last 10, but on the road they’ve lost four in a row including their first shootout loss of the season.

A 4-2 home loss to Philadelphia gave them one of just two losing records at home in the Eastern Conference (the Flyers are the other). Their average of 3.67 home goals against ranks last in the NHL.

It’s been iffy in OT for the Panthers. In four of their last five games they've gone to extra time, winning two and losing two. Not iffy has been their power play with goals in 15 of their last 16 games.

Anthony Stolarz, the Flyers’ fifth goalie to start this year, got just their second win in their last eight games. Carter Hart, the team’s goalie of the future, has a .893 save percentage in the AHL.

The current five-game losing skid doesn’t look quite as bad when you factor in that three of the losses came in OT. On the season they have a record of 0-5 in extra time. Cory Schneider is 0-5 this season.

Firing Joel Quenneville hasn’t worked out so far for the Blackhawks. They have a record of 3-8-2 and have lost six of their last seven, allowing 32 goals in the losses, under new coach Jeremy Colliton.

The Canucks have just one win in their last 12 games (1-9-2) and that was over lowly Los Angeles. Their bad stretch includes five straight losses at home (0-4-1) in which they were outscored 18-10.

Problems galore for the Kings this season, including the fact that Jonathan Quick didn’t have a win until Sunday’s 2-0 shutout (50th of his career) of Carolina as he’s missed 18 games due to injuries.

The Blues have had some impressive wins lately, defeating Nashville and Colorado, but it doesn’t make up for the six losses in their last eight games. In those losses they’ve been outscored 26-9.