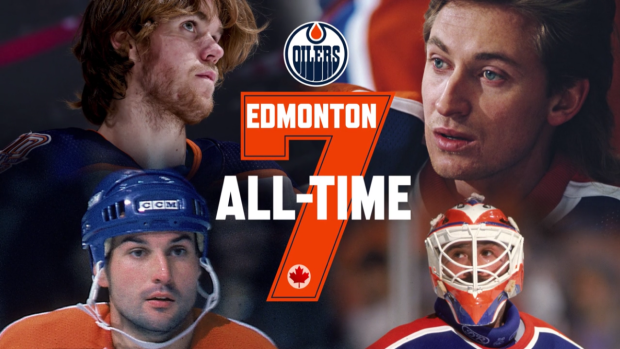 TSN Hockey presents the All-Time 7 Project. We are naming all-time teams – 21 players, a head coach and GM - for each of the seven Canadian NHL clubs. Today, we continue with the Edmonton Oilers.

Of all TSN’s All-Time Teams none features a concentration of players from a period so brief as the Edmonton Oilers.

Sixteen of the 21 players played all or part of the Oilers’ five Stanley Cup years spread over seven seasons.

The entire last line of defence – goalies Grant Fuhr and Bill Ranford plus six defencemen – is from the Golden Era: 1983 through 1990.

Eight of the 12 forwards – including headliners Wayne Gretzky, Mark Messier and fellow Hall of Famers Jari Kurri and Glenn Anderson – collectively shredded the franchise and NHL record books during that period.

It is no surprise then that those Oilers would dominate a franchise all-time team.

Edmonton was a charter member of the WHA, playing all seven seasons; Gretzky was famously traded to the Oilers in the renegade league’s final season (1978-79). When the NHL added four WHA teams the following season, Edmonton was permitted to protect four players and Gretzky was foremost among them.

The eight-time Hart Trophy winner’s singular statistical dominance has been expressed in many ways, but the very best may be this: he would have won three scoring titles and tied for a fourth on the basis of assists alone.

It would be 30 years – from 1987 to 2017 – before another Oiler, Connor McDavid, won the scoring title. McDavid was the NHL’s top scorer in 2017 and 2018 and Leon Draisaitl was a lock to make it three Oilers in four years this season before the NHL paused.

One of the criteria for each of the all-time teams is that the 2019-20 team must be represented. McDavid and Draisaitl make up two-thirds of a third trio (along with Ales Hemsky, who wins the line lottery) for the all-time Oilers.

A reminder that pairs and lines listed below are assembled as we imagine them to be best together, not necessarily because they are the best, second best or third best at their positions.

□ Team: two goalies, six defencemen, 12 forwards and one foundational player
□ Members must have played at least 225 regular season games with the Oilers (in the WHA and / or NHL)
□ At least one member of the all-time team must be from the 2019-20 Oilers
□ Players are slotted in positions they played with the Oilers
□ One line must be comprised of defensive standouts, aka a checking line
□ One pair must be comprised of suffocating defenders, aka a shutdown pair
□ Lines and pairs are put together because they fit together, not because they are necessarily the first, second and third best at their positions
□ Foundational players are defined as players part of the fabric – the DNA – of a franchise
□ Last cuts by position are exactly as advertised, the players who just missed selection to the all-time team 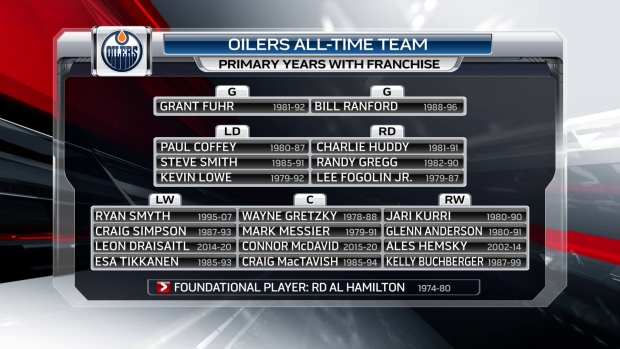 Goalie Grant Fuhr
Fuhr was a Vezina Trophy winner and two-time end of season all-star, but team honours define his career more than individual honours. Fuhr was the goalie of record for 56 of 62 victories en route to the first four Stanley Cups championships.

Goalie Bill Ranford
Ranford did something in 1990 Fuhr never did during his career – that is, win the Conn Smythe Trophy. The highlight was a triple-OT, 50-save effort in Game 1 of the final versus Boston.

LD Steve Smith – RD Randy Gregg
Smith was a hard-as-nails rearguard who played a major role in three championships and fits together with the future Dr. Gregg who played for the Japanese League’s Kokudo Bunnies before returning to win five Cups with his hometown team.

LW Ryan Smyth - C Wayne Gretzky - RW Jari Kurri
Smyth, the Oilers’ all-time leader in games by a forward, replaces Tikkanen (otherwise occupied on the checking line) alongside the greatest scoring duo in NHL history – Gretzky and Kurri. The high point: 144 goals between them in 1984-85

LW Leon Draisaitl – C Connor McDavid – RW Ales Hemsky
The mind boggles what 2019-20 Hart Trophy frontrunner Draisaitl and McDavid, perennial pick as the NHL’s No. 1 player in the TSN poll, could accomplish with someone of Hemsky’s skill and competitiveness on their right side.

Foundational Player - RD Al Hamilton
Would the NHL Oilers exist without the WHA Oilers? We’ll never know, but we do know that no WHA Oiler meant as much to the franchise as Hamilton who played all seven seasons, led the team in games and points and earned two berths on league all-star teams. Hamilton played season one in the NHL and had his No. 3 become the first number retired by the franchise.

Head Coach/General Manager - Glen Sather
There is no management figure more inexorably linked to a hockey franchise during the late 20th century than Sather. He was a player, player-coach and coach of the WHA Oilers before taking over as coach-GM of the nascent NHL Oilers winning four Stanley Cups and then a fifth as GM only.

Doug Weight is the highest-scoring Oiler not on the all-time team – averaging almost a point per game with 577 points in 588 games – but an embarrassment of riches at centre made it impossible for him to crack the lineup. Gretzky, Messier and McDavid are all Hart Trophy winners as Oilers.

Who is the biggest omission from the Edmonton Oilers' all-time team?