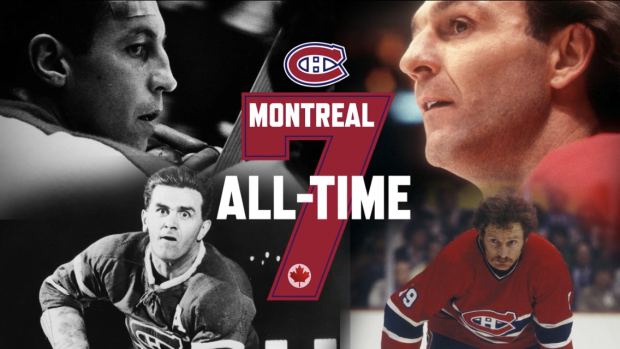 TSN Hockey today introduces the All-Time 7 Project. We are naming all-time teams – 21 players, a head coach and GM - for each of the seven Canadian NHL clubs. Today, we begin with the Montreal Canadiens.

Picking an all-time team in any sport is a mug’s game at best, an act of masochism at worst.

You can’t win. And you certainly can’t win when you’re tasked with selecting 21 players to capture the history of the most decorated team in NHL history: the Montreal Canadiens.

Nowhere was the challenge greater than in the crease where five Hall of Famers squared off to fill one position.

Only one, and not two, because Carey Price was the only authentic candidate to fill one of the baseline requirements for assembling TSN all-time teams for all seven Canadian NHL teams.

Price, No. 1 in franchise wins, gets the job of Montreal’s No. 2 goalie.

Georges Vezina, the man whose name is on the trophy given annually to the league’s best goalie, was not a consideration on a technicality: He didn’t meet the minimum requirement of 225 games played with the Canadiens.

In the end, Dryden got the nod to represent the back end by the narrowest of margins over Roy.

And Plante was named the Canadiens’ foundational player – defined as the player who is part of the very fabric, the DNA, of the organization.

There was a compelling case for Roy because he carried Montreal to two Stanley Cups, earning two Conn Smythe honours along the way. His Canadiens of the 1980s and 1990s were not filled with Hall of Famers like Plante’s of the 1950s and Dryden’s of the 1970s.

But Dryden’s extraordinary career marks could not be denied: 258 wins and only 57 losses during the regular season, plus 19 series wins and just two losses in eight post-seasons.

Here are the rest of our choices and last cuts. Let us know what you think.

□ Team: two goalies, six defencemen, 12 forwards and one foundational player
□ Members must have played at least 225 regular season games with the Canadiens
□ At least one member of the all-time team must be from the 2019-20 Canadiens
□ Players are slotted in positions they played with the Canadiens
□ One line must be comprised of defensive standouts, aka a checking line
□ One pair must be comprised of suffocating defenders, aka a shutdown pair
□ Lines and pairs are put together because they fit together, not because they are necessarily the first, second and third best at their positions
□ Foundational players are defined as players part of the fabric – the DNA – of a franchise
□ Last cuts by position are exactly as advertised, the players who just missed selection to the all-time team 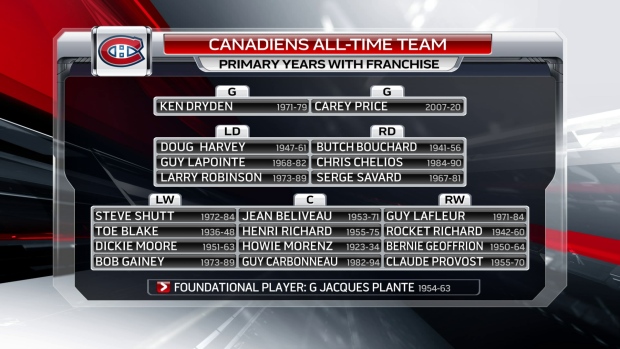 Goalie Carey Price
The winningest goalie in team history and 2014-15 Hart Trophy winner is the right choice to represent the current Canadiens on the all-time team.

LD Doug Harvey – RD Butch Bouchard
The six-time Norris Trophy-winning Harvey and three-time first all-star Bouchard make a great combination on the ice and in the Hall of Fame.

LD Larry Robinson – RD Serge Savard
Shutdown Pair: Is there anyone else you would want protecting a lead in the final minute of a playoff game more than a pair of Conn Smythe-winning defencemen?

LW Steve Shutt - C Jean Beliveau - RW Guy Lafleur
Shutt and Lafleur share the team record for most goals (60) and Beliveau is one of the great puckhandlers and puck distributors in NHL history.

LW Dickie Moore – C Howie Morenz – RW Bernie Geoffrion
All three players won two scoring titles each and we couldn’t resist putting Geoffrion on the same line as his father-in-law, Morenz, the game’s most important player during the 1920s and early 1930s.

LW Bob Gainey – C Guy Carbonneau – RW Claude Provost
Checking Line: If a combined seven Selke Trophies and 16 Stanley Cups don’t add up to the greatest-ever checking line from a single team, then we don’t know what does.

Foundational Player - G Jacques Plante
A revolutionary player in style and impact, Plante changed the face of the game, becoming the first goalie to wear a mask. He compiled a 40-9 playoff record from 1956 through 1960, finishing off with eight straight victories to complete Montreal’s record run of five straight Cups.

Head Coach - Scotty Bowman (1971-79)
GOAT coach Bowman may not have won more Cups than Blake behind the bench with the Canadiens – five versus eight – but his winning percentage was superior - .744 to .634. Besides, there is no room for a player-coach on the all-time team and Blake is otherwise occupied with the Richard brothers

General Manager - Sam Pollock (1964-78)
Hockey smarts, business smarts and flat-out smarts combined to make Pollock the automatic choice. He won more Stanley Cups – nine - than he had fingers to wear them on.

The hardest cut of all was Patrick Roy, the driving force behind two Montreal Stanley Cups, joining Bobby Orr, Bernie Parent, Wayne Gretzky, Mario Lemieux and Sidney Crosby as the only players to win two Conn Smythes with one team.

Who is the biggest omission from the Montreal Canadiens’ all-time team?