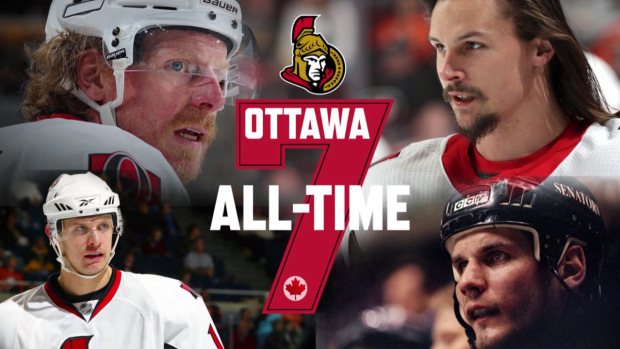 TSN Hockey presents the All-Time 7 Project. We are naming all-time teams - 21 players, a head coach and GM - for each of the seven Canadian NHL clubs. Today, we continue with the Ottawa Senators.

Separated by nearly six full decades, the original Ottawa Senators (1917-34) and their distant cousins (1992-2020) are reunited on TSN’s All-Time Team.

And the result is a team featuring stars, superstars and three giants: Cy Denneny, Daniel Alfredsson and Erik Karlsson.

Denneny was one of the NHL’s first faces of the game – making a seismic impact from the league’s inaugural season in 1917-18. Denneny left the Senators after 11 seasons as the NHL’s all-time leading goal-scorer (246) and point-producer (333).

Alfredsson fashioned a brilliant career over 17 seasons, establishing franchise highs in goals (426), assists (682) and points (1,108). No other Sen is within 400 points of him.

The trio is not alone in Senators’ history, of course, but they cast long shadows – as do the original Senators.

They have a proud history, winning three Stanley Cups before formation of the NHL and another four over an eight-year period (1920-27,) becoming the league’s first dynasty.

The Senators earned the title of Canada’s greatest team of the first half of the 20th century.

The Senators’ franchise moved to St. Louis in 1934 and a glorious era in Ottawa hockey was over.

Fast forward to 1992 and the Senators were reborn. Which brings us to the present, franchise icons Alfredsson and Karlsson, and a host of others who have left their marks:

Jason Spezza and Dany Heatley are the only two players to average more than a point per game over their Senators’ careers.

Craig Anderson has stopped nearly twice as many shots (12,447) as any other Senators’ goalie.

They have earned their places in Senators’ history.

□ Team: two goalies, six defencemen, 12 forwards and one foundational player
□ Members must have played at least 225 regular season games with the Senators
□ At least one member of the all-time team must be from the 2019-20 Senators
□ Players are slotted in positions they played with the Senators
□ One line must be comprised of defensive standouts, aka a checking line
□ One pair must be comprised of suffocating defenders, aka a shutdown pair
□ Lines and pairs are put together because they fit together, not because they are necessarily the first, second and third best at their positions
□ Foundational players are defined as players part of the fabric – the DNA – of a franchise
□ Last cuts by position are exactly as advertised, the players who just missed selection to the all-time team 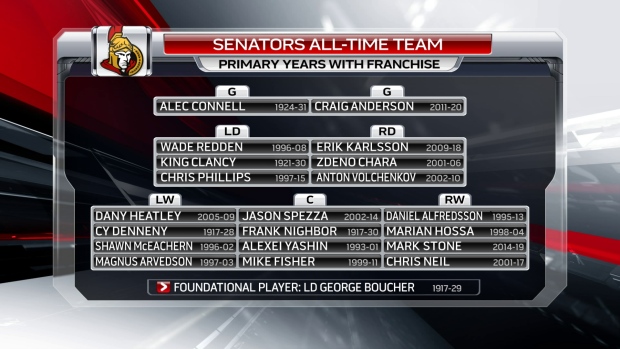 Goalie Alec Connell
The Stanley Cup-winning Connell’s 43 shutouts in three seasons (1925-28) were 16 more than any other goalie during that period and 13 more than Patrick Lalime’s 30, which are most for the Senators 2.0.

LD Wade Redden – RD Erik Karlsson
Redden was a national team level fixture on the blueline and the perfect complement to Karlsson, one of the greatest offensive rearguards in NHL history.

LD Chris Phillips – RD Anton Volchenkov
Shutdown Pair: The Big Rig is the all-time franchise leader in games and Volchenkov was the leader in NHL blocked shots from 2005-06 through 2009-10.

LW Cy Denneny – C Frank Nighbor – RW Marian Hossa
Hossa is regarded as one of the game’s all-time complete players; he would have no problem fitting in with early 20th century super-scorers Denneny and Nighbor. Will he one day join them in the Hall of Fame?

Foundational Player - LD George Boucher
Boucher was a member of the National Hockey Association Senators for two seasons before playing 12 seasons with the NHL Senators, leading all defencemen in points on the way to the Hall of Fame. One team official from the 1920s bestowed high praise on Boucher: “[He] is what I know to be an honest player and an honest sportsman.”

Head Coach - Jacques Martin
The all-time franchise leader in regular season and playoff victories won the Jack Adams Award in 1999 and led the Senators to the Presidents’ Trophy in 2003. Provincial arch-rival Toronto made life miserable for Martin, beating the Senators four times in the playoffs.

General Manager - Bryan Murray
Ottawa Valley legend Murray compiled a gaudy .664 point percentage in two seasons behind the Senators’ bench – advancing and losing to Anaheim in the 2007 Cup final before joining the front office the following season. He served as GM for nine seasons before turning over the reigns to Pierre Dorion in 2016. Murray died of colon cancer in 2017.

Patrick Lalime has the lowest playoff goals-against average (1.77) of any goalie with a minimum 40 games in the Modern Era . And technically not a cut but definitely an omission is Tommy Gorman, the GM who won three Stanley Cups over a four-year period (1920-23).

Who is the biggest omission from the Ottawa Senators’ all-time team?