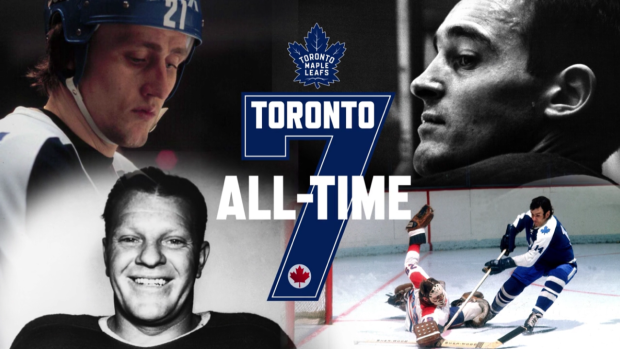 TSN Hockey introduces the All-Time 7 Project. We are naming all-time teams – 21 players, a head coach and GM - for each of the seven Canadian NHL clubs. Today, we continue with the Toronto Maple Leafs.

The selection of each team in the TSN All-Time 7 Project poses its own unique challenges, but the most difficult of all was choosing the Toronto Maple Leafs’ centres.

No team’s list of greatest players is as centre-centric as the Maple Leafs.

Consider that when the organization named its all-time best 100 players in 2016 the top five were all centres: No. 1 Keon, No. 2 Syl Apps, No. 3 Teeder Kennedy, No. 4 Darryl Sittler and No. 5 Mats Sundin. Add in No. 13 Doug Gilmour and that’s six of the first baker’s dozen.

Since then a seventh superstar centre has emerged – Auston Matthews.

Here’s the problem: there are only five openings for centres on the all-time Leafs.

And one of those is spoken for: Matthews, who was poised to become the first Leaf to score 50 goals since 1993-94 before this season was put on pause, is the automatic choice to fulfill one of the selection criteria. That is, one player must be from the 2019-20 Leafs.

Make that four openings: centres for three lines and one foundational player – a player identified as being part of the very fabric – the DNA – of the franchise.

Here are the cases for all six, listed in chronological order:

Apps (1936-48), a three-time Stanley Cup winner, was a five-time first or second all-star and five-time finisher among the top three in Hart Trophy balloting for the NHL’s most valuable player.

Kennedy (1943-55) won a Hart Trophy and went five-for-five in Cup finals. When The Hockey News awarded retro Conn Smythes to honour the best playoff performances before the award was introduced in 1965, Kennedy was named a two-time winner (1947 and 1948).

Keon (1960-75) ranks as one of hockey’s greatest two-way forces, combining offensive skill with defensive diligence, including status as a premier penalty-killer. He won the Conn Smythe in 1967, the last year the Leafs won the Cup. It was his fourth playoff championship.

Sittler (1970-82) ranks second all-time in goals and points, led the Leafs in scoring eight times and – along with Gilmour – is one of only two Leafs to average more than a point per game during the playoffs and regular season.

Gilmour (1992-97) is the all-time leader in regular-season points per game, playoff assists and playoff points, willing Toronto to the conference final in 1993 and 1994. He averaged 1.48 points per playoff game with the Leafs, more than half a point better than second-place Sundin (0.91).

Sundin (1994-2008) is the second-longest serving captain in Leaf history, behind only George Armstrong, and the all-time leader in regular season goals and points, topping the Leafs in scoring 12 seasons – something only four other NHL players have matched and surpassed by only one: Gordie Howe, Mr. Hockey (17).

□ Team: two goalies, six defencemen, 12 forwards and one foundational player
□ Members must have played at least 225 regular season games with the Maple Leafs
□ At least one member of the all-time team must be from the 2019-20 Maple Leafs
□ Players are slotted in positions they played with the Maple Leafs
□ One line must be comprised of defensive standouts, aka a checking line
□ One pair must be comprised of suffocating defenders, aka a shutdown pair
□ Lines and pairs are put together because they fit together, not because they are necessarily the first, second and third best at their positions
□ Foundational players are defined as players part of the fabric – the DNA – of a franchise
□ Last cuts by position are exactly as advertised, the players who just missed selection to the all-time team 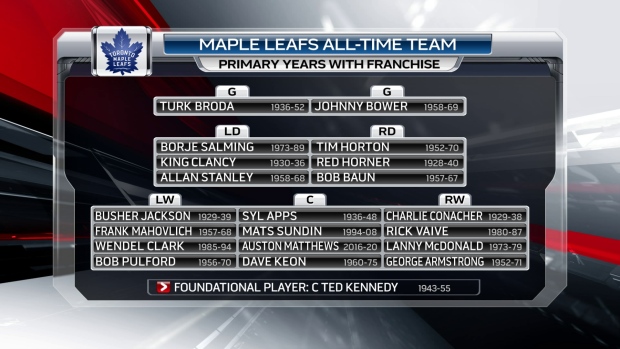 Goalie Turk Broda
Weight issues aside – famously known as the Battle of the Bulge – Broda was a brilliant regular-season and playoff performer winning 16 of 18 games over one two-year postseason period (1947 and 1948).

Goalie Johnny Bower
A late NHL bloomer, making the NHL at 29 and joining the Leafs at 34, Bower played until age 45 and ranks as the most beloved Leaf of all-time.

LD Borje Salming – RD Tim Horton
Swedish trailblazer Salming changed the demographics of the game, paving the way for a massive influx of Europeans, and strongman Horton was as old school as it got, emerging from Northern Ontario as did many Leafs from the 1960s.

LD King Clancy – RD Red Horner
Clancy was an all-star the first four years the honour was introduced in the 1930s and Horner led the NHL in penalty minutes a record seven seasons.

LD Allan Stanley – RD Bob Baun
Shutdown Pair: Stanley won the draw against Montreal’s Jean Beliveau that led to George Armstrong’s insurance goal in the 1967 Cup-clinching win and Baun was a fierce defender who scored the overtime winner on a broken ankle in Game 6 of the 1964 final versus Detroit.

LW Wendel Clark – C Auston Matthews – RW Lanny McDonald
The hard-as-nails Clark and three-time 40-goal-scoring McDonald flank the man who may one day be regarded as the greatest Leaf goal-scorer. Matthews is the first player in franchise history to begin a Leafs’ career with four consecutive seasons of at least 30 goals.

Foundational Player C Ted Kennedy
“C’mon Teeder!” filled Maple Leafs Gardens to encourage the fans’ favourite son. He was a three-time second all-star and scored two Stanley Cup-winning goals. But more than statistics defined Kennedy’s impact: he was a human flag for Leaf Nation before such a thing existed.

Head Coach Punch Imlach
Imlach gets the edge over Hap Day as head coach. Day won more Cups (five to four), but the famously combative Imlach also served as GM from 1959-60 through 1968-69. Imlach’s style was summed up in the title of his autobiography, Hockey is a Battle.

General Manager Conn Smythe
‘The Major’ was part of the group that purchased the Toronto St. Patricks and then re-named them the Maple Leafs in 1927 – beginning a near three-decade-long reign that saw the franchise win seven Cups, including a dynastic four in five years (1947-51). Smythe is not only the most important individual in Leafs’ history – building the iconic Maple Leaf Gardens among his many landmark moves – he is also one of the most important figures in NHL history.

Leaving Darryl Sittler and Doug Gilmour – two players with an emotional pull connection to fans and the franchise – off the team is virtually indefensible. Sittler’s 10-point game is the stuff of legends and Gilmour produced the greatest back-to-back seasons in team history.

Who is the greatest omission from the Toronto Maple Leafs' all-time team?