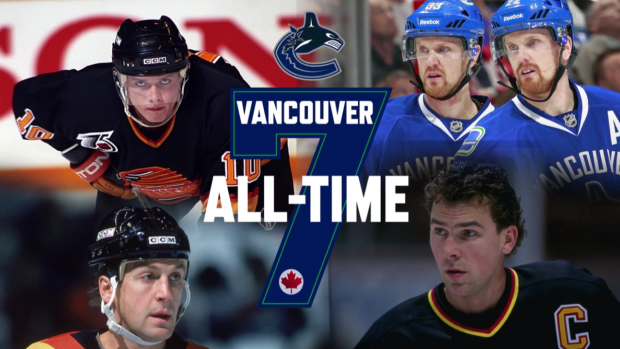 TSN Hockey presents the All-Time 7 Project. We are naming all-time teams - 21 players, a head coach and GM - for each of the seven Canadian NHL clubs. Today, we conclude it with the Vancouver Canucks.

If this were 2025 rather than 2020, how different might the Vancouver Canucks’ all-time team look?

Indeed, how different might it look if it were 2022 – pandemic permitting?

Absent from the TSN All-Time 7 star-studded team are Elias Pettersson and Quinn Hughes, the centre named NHL Rookie of the Year in 2018-19 and the left defenceman who may earn the same honour in 2019-20.

Neither sophomore Pettersson, nor freshman Hughes, has played the requisite 225 regular-season games to be eligible for the all-time team. By the end of the 2021-22 season, they should both have reached that minimum.

It wouldn’t be reasonable to consider their abbreviated bodies of work – however impressive – in the same classes as that of their predecessors.

But it is at right wing where things are really crowded.

Five of the top goal-scorers in franchise history are long-time right wingers: No. 4 Stan Smyl, No. 5 one-of-a-kind Pavel Bure, No. 6 Tony Tanti, No. 9 Alex Burrows and No. 10 Todd Bertuzzi.

And that’s not counting No. 3 Linden, who played a portion of his career at right wing but is on the all-time team as a centre.

The TSN All-Time 7 Project has been a stickler about slotting players at their authentic positions and not positions of convenience – for instance, highly regarded centres being moved to the wing for the sake of getting them on teams – but there has been a measure of latitude for the checking line.

The left-shooting Burrows is an example of that: he had four straight 20-plus goal seasons playing right wing with the Sedins, but began a Canucks Ring of Honour-worthy career at left wing.

Burrows is slotted on the checking line alongside Kesler and Smyl, who had eight consecutive seasons of at least 20 goals, but is a great fit as a hard-edged defensive presence.

There is, as a result of the right-eous nature of the team, one prominent casualty. Alex Mogilny, who scored 55 goals in 1995-96, averaged nearly a point per game over 312 games and earned a berth on the second all-star team, has been squeezed out.

A similar situation arose in Calgary, where the Flames had room for only four of five 50-goal scoring right wingers. Hakan Loob was the last cut in Calgary.

Such is the lot of great players who find themselves in great company.

□ Team: two goalies, six defencemen, 12 forwards and one foundational player
□ Members must have played at least 225 games with the Canucks
□ At least one member of the all-time team must be from the 2019-20 Canucks
□ Players are slotted in positions they played with the Canucks
□ One line must be comprised of defensive standouts, aka a checking line
□ One pair must be comprised of suffocating defenders, aka a shutdown pair
□ Lines and pairs are put together because they fit together, not because they are necessarily the first, second and third best at their positions
□ Foundational players are defined as players part of the fabric – the DNA – of a franchise
□ Last cuts by position are exactly as advertised, the players who just missed selection to the all-time team 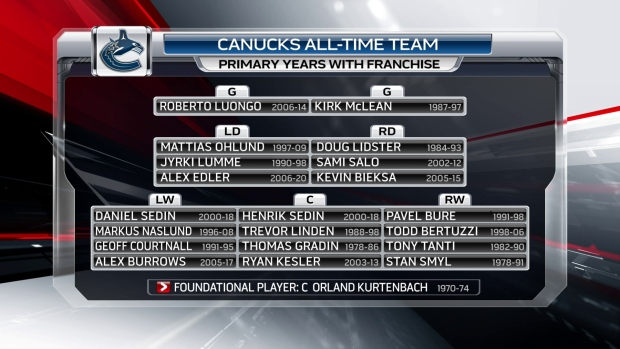 Goalie Roberto Luongo
The franchise all-time leader in regular-season wins helped take the Canucks to Game 7 of the 2011 Stanley Cup final, earned a berth on the second all-star team (2006-07), led the NHL in wins once (38, 2010-11) and was a top-three finisher in Vezina Trophy balloting twice.

Goalie Kirk McLean
The franchise all-time leader in playoff wins helped take the Canucks to Game 7 of the 1994 Stanley Cup final, earned a berth on the second all-star team (1991-92), led the NHL in wins once (38, 1991-92) and was a top-three finisher in Vezina Trophy balloting twice.

LD Mattias Ohlund – RD Doug Lidster
Ohlund and Lidster are both 300-point scorers for the Canucks and four-time winners of the Babe Pratt Trophy, awarded annually to the team’s best defenceman.

LD Jyrki Lumme – RD Sami Salo
Lumme’s importance to the Canucks in the 1990s was such that he led defencemen in both goals and points six of seven seasons (1992-98) while hard-shooting Salo holds the team record for most career power-play goals (48).

LD Alex Edler – RD Kevin Bieksa
Current Canuck Edler is not just the all-time leader in defenceman games, goals, assists and points, he is also the best choice to pair with Kevin Bieksa on the shutdown tandem.

LW Daniel Sedin - C Daniel Sedin - RW Pavel Bure
The 1,000-point brothers who shared a hockey brain and the most dynamic player in franchise history are the stuff of legends on the Lower Mainland.

LW Geoff Courtnall – C Thomas Gradin – RW Tony Tanti
Courtnall ranks behind only Linden and Bure in career playoff goals. The great Gradin led the Canucks in assists four straight seasons in the early 1980s. Tanti is the only player in team history to average 40 goals per year over five consecutive seasons.

LW Alex Burrows – C Ryan Kesler – RW Stan Smyl
Checking Line: Burrows returns to his Canuck roots as a left winger alongside eventual Selke winner (and runner-up) Kesler. On the right side is ‘Steamer’ Smyl, he of the complete game and nine 100-penalty-minute seasons.

Co-GMs - Pat Quinn and Mike Gillis
Quinn (1987-98) was an iconic presence, so much so that a statue was erected in his honour outside Rogers Arena. Among his moves were picking Pavel Bure in 1989 and picking himself to coach the Canucks: He was named Coach of the Year in 1992 and led Vancouver to Game 7 of the 1994 Stanley Cup final. Gillis (2008-14) assembled a superb record. His teams fashioned a franchise-high .626 cumulative regular season point percentage, winning two Presidents’ Trophies along the way. The Canucks reached Game 7 of the 2011 Stanley Cup final, the same season Gillis was named GM of the Year.

Right winger Alex Mogilny and centre Cliff Ronning each played 300-plus games and left their marks on the Canucks. Mogilny is one of only two Canucks – Pavel Bure is the other - to score 50 goals in a season and he averaged 0.99 points per game. Ronning averaged 0.90 points per game and his exemplary playoff record is headed up by a club-record seven game winning goals.

Who is the biggest omission from the Vancouver Canucks’ all-time team?