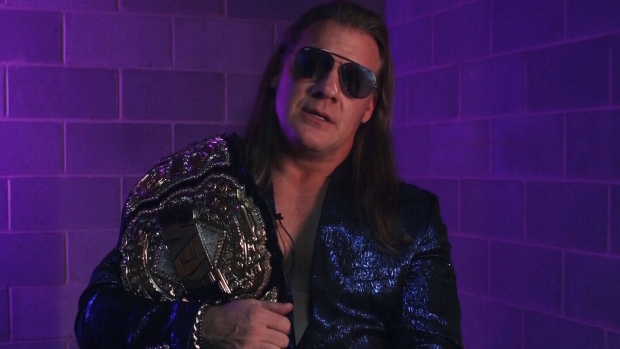 The Elite and the Inner Circle were in the midst of a wild brawl as AEW Dynamite ended on Wednesday night, setting the stage for what should be an action packed Full Gear event.

AEW Chris Jericho and partner Sammy Guevara stole a victory from “Hangman” Adam Page and Kenny Omega in their main event tag team match, earning some momentum for Le Champion, before he puts his gold on the line this weekend.

Jericho hit the Judas Effect and scored the pin over Page after PAC ran in from the back and attacked “Hangman” from behind.

Jake Hager, who accompanied his fellow Inner Circle members to the ring, had already implicated himself in the match by attacking Omega.

As the three victorious men continued their post-match attack on Page, Saturday’s title challenger Cody ran into the ring and cleaned house, sending a message to Jericho and the rest of his crew.

Jon Moxley arrived on the scene with a barbed wire bat and though his target would appear to have been Omega, he caused enough of a distraction for Cody that the Inner Circle was able to attack him again, sending their own message before the title fight.

Moxley would get his showdown with Omega, who at this point had armed himself with a barbed wire broom, but before they could settle their score, Santana and Ortiz jumped them both.

This was enough for the Young Bucks to come out from the back and the full scale uncontrollable brawl was in effect.

Earlier in the night, Cody made a bombshell announcement about his future.  The American Nightmare says that if he does not defeat Jericho at Full Gear, he will never challenge for the title again.

Click on the video to watch the full On Demand episode of Wednesday's AEW Dynamite:

Kenny Omega and Hangman Page vs. Inner Circle's Sammy Guevara and AEW World Champion Chris Jericho. Trent vs Pac. Jon Moxley appears live on the final Dynamite before his Lights Out match against Omega at the Full Gear pay-per-view event.

The next show airs next Wednesday, November 13th, on TSN2, the TSN App and TSN Direct, live from Nashville Municipal Auditorium in Nashville, TN.