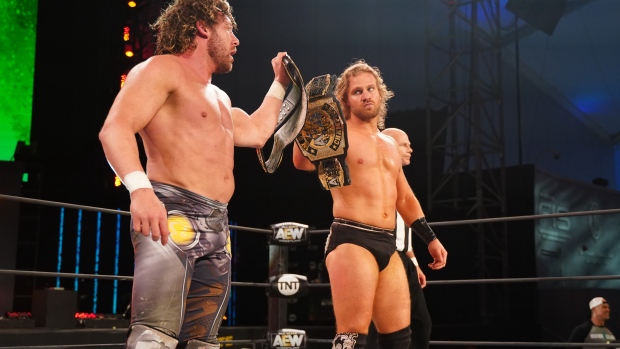 By the end of Wednesday night, the AEW Tag Team Championship match coming up at next month's Fyter Fest might feature two completely different teams than the ones who are currently scheduled to do battle.

Tag-team action will be the focal point of an all-new episode of AEW Dynamite with the both titles and the No. 1 contendership on the line on Wednesday night.

You can catch an all-new AEW Dynamite at 8pm et/5pm pt on TSN2, the TSN app, streaming on TSN Direct and on TSN.ca.

The Elite's "Hangman" Adam Page and Kenny Omega make a title defence for the second time in three weeks on Dynamite when they take on The Natural Nightmares of Dustin Rhodes and Q.T. Marshall.

The Natural Nightmares have been on a roll since forming their team in February and are most recently coming off of a victory over Brandon Cutler and Peter Avalon on AEW Dark two weeks ago. While the team has been successful in the ring, what's been happening outside of it has been just as interesting as of late with Marshall and Allie having recently become an item, much to the chagrin of Dustin and manager Brandi Rhodes. The Natural Nightmares can ill afford any kind of distraction against the champions, who have been undefeated since winning the titles back in January.

The winners of Wednesday night's title match are scheduled to defend their crown at Fyter Fest against current No. 1 contenders, Best Friends, but that could change on Wednesday night when Chuck Taylor and Trent? put their title shot up for grabs against the Inner Circle's Le Sex Gods of Sammy Guevara and Chris Jericho.

Best Friends earned their title shot with a win over Private Party (Isaiah Kassidy and Marq Quen) at last month's Double or Nothing pay-per-view, but have now found themselves embroiled in an escalating situation between stablemate Orange Cassidy and "Le Champion." After Cassidy literally strolled into Jericho's spotlight several weeks ago, "Freshly Squeezed" has become a thorn in the former AEW World Champion's side, but Jericho was able to take a measure of revenge on last Wednesday's Dynamite. Following Cassidy and Best Friends' victory over the Inner Circle team of Santana, Ortiz and Jake Hager in six-man action, Jericho and the rest of his crew delivered a brutal beating to Cassidy and Best Friends with Jericho adding insult to injury with a bag of oranges. Best Friends challenged Guevara and Jericho to defend Cassidy's honour, but Le Sex Gods didn't have any interest until Trent? and Chuckie T. put their title shot on the line. Will Best Friends avenge Orange Cassidy or have Le Sex Gods managed to turn their opponents' thirst for vengeance into a shot at tag team gold?

Elsewhere, Cody will once again put his TNT Championship on the line in his weekly open challenge, but for the first Wednesday night since it began, "The American Nightmare" doesn't know who his challenger will be ahead of time. After Jungle Boy and Quen couldn't take his title in his first two defences, who will step up to face Cody on this week's dynamite? The monstrous Hager is waiting in the wings for his title shot at Fyter Fest.

The Young Bucks (Nick Jackson and Matt Jackson) return to Dynamite for their first traditional tag match on a Wednesday night since January when they step into the ring with the SuperBad Death Squad of Kip Sabian and Jimmy Havoc. Sabian and Havoc were unsuccessful in their attempt to dethrone the Jacksons' stablemates Page and Omega two weeks ago on Dynamite, but they once again made themselves a nuisance to The Elite when they jumped the Bucks from behind last Wednesday night as they were confronting FTR (Dax Harwood and Cash Wheeler). With their rivalry with FTR still simmering, can the Jacksons focus on the task at hand with Sabian and Havoc?

Maxwell Jacob Friedman is no stranger to his mouth getting him into trouble and on Wednesday night, MJF steps into the ring with a veteran looking to teach him some respect.

After insulting the Gunn Club on last week's Dynamite, Friedman takes the Gunn Club patriarch, Billy. MJF is undefeated in 2020 and holds the No. 1 spot in AEW's Men's Rankings, but he's doing battle with an industry veteran and one of the most decorated tag-team wrestlers in the history of the industry. Will this be the first time that MJF's mouth finally writes a cheque that his body can't cash?