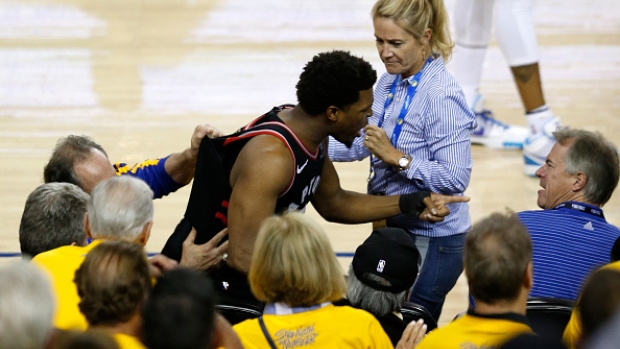 The NBA and the Golden State Warriors announced that Warriors part-owner Mark Stevens has been banned from attending NBA games and Warriors team activities for one year and has been fined $500,000 for pushing directing obscene language towards Kyle Lowry of the Toronto Raptors.

The NBA and Warriors have banned Warriors investor Mark Stevens from NBA games for one year and fined him $500,000 for altercation with Raptors All-Star Kyle Lowry.

Stevens' ban is effective immediately and carries through the 2019-20 NBA season, including the playoffs.

“A team representative must be held to the highest possible standard and the conduct of Golden State Warriors investor Mark Stevens last night was beyond unacceptable and has no place in our league.  As the review of this matter continues, Mr. Stevens will not be permitted to attend NBA games," Mike Bass, NBA executive vice president, communications said in a statement issued by the league on Thursday.

As Lowry attempted to keep a loose ball in play, he fell into the courtside seats. Stevens could be seen shoving Lowry in the shoulder. The Raptors guard said that Stevens used vulgarity towards him during the altercation.

Stevens was later escorted out of the arena.

"The fans have a place; we love our fans," Lowry said after the game. "But fans like that shouldn't be allowed to be in there, because it's not right. I can't do nothing to protect myself."

Stevens purchased his stake in the club in 2013 when Vivek Ranadive was forced to divest his stake when he purchased the Sacramento Kings.

The Warriors released a statement Thursday morning apologizing to Lowry.

Team says he will not be attending any more Finals games and it will be investigating the incident further. pic.twitter.com/1aA3ZKzu6h

"Mr. Stevens' behavior last night did not reflect the high standards that we hope to exemplify as an organization," the statement read. "We're extremely disappointed in his actions and, along with Mr. Stevens, offer our sincere apology to Kyle Lowry and the Toronto Raptors organization for this unfortunate misconduct. There is no place for such interaction between fans—or anyone—and players at an NBA game."

"When you sit courtside, you absolutely know what comes with being on the floor and if you don’t know it’s on the back on the ticket itself that states the guidelines," James wrote. "But he himself being a fan, but more importantly part-owner of the Warriors, knew exactly what he was doing, which was so uncalled for. He knew the rules more than just the average person sitting watching the game courtside, so for that something needs to be done ASAP!"

Game 4 between the two teams is set for Friday night in Oakland.

The Raptors lead the NBA Finals 2-1.