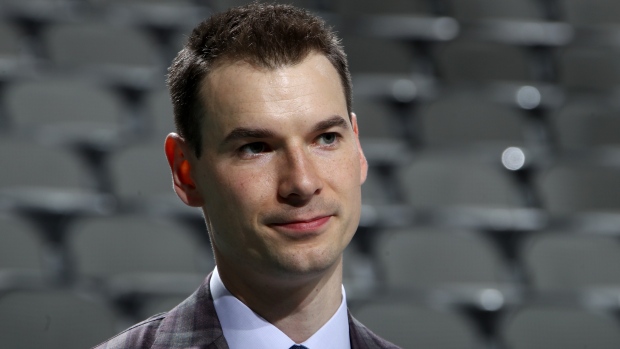 It’s been a while since dysfunction in the desert reared its ugly head, but with the unexpected departure of general manager John Chayka from the Coyotes organization this past weekend, it seems the franchise is back to square one.

Chayka quit his job with three years remaining on the long-term extension he signed in November. Why? The answer isn’t clear.

We do know that Chayka may have had an opportunity with another organization, and that the Arizona Coyotes organization didn’t like – among other things – a chief executive looking for a new job the week before the Stanley Cup Playoffs.

This story will be told over time, but for now Chayka’s departure leaves Arizona in a bit of chaos. Steve Sullivan has been named interim general manager, and whatever plans the organization may have had under Chayka heading into a pivotal off-season, headlined by Taylor Hall’s contract situation, may be scrapped.

Sullivan takes over a team with a number of young players signed to long-term contracts –extensions to Nick Schmaltz, Jakob Chychrun, Clayton Keller, Christian Dvorak, and the like have solidified the team's core, but have also pushed the organization to the high end of the salary cap.

It’s interesting to look at the state in which the Coyotes organization is left post-Chayka. The 31-year-old was an atypical hire, one who came from a tech background with limited management experience and who was about 20 years younger than most front office executives around the league.

We won’t get to see the end of Chayka’s roster building, and like most general managers leaving mid-contract, his results are a mixed bag.

The team missed the playoffs in Chayka’s first three seasons, and only reached the postseason this year because of the expanded format. But Chayka also took over a truly miserably team – one that improved emphatically over his tenure, even without the playoff success:

Is Chayka a failure because his team never naturally reached the playoffs, or is he a success because he put the team on the right path? There’s probably some truth to both arguments. To that end, I thought it would be interesting to dissect some of Chayka’s best and worst moves at a more granular scale.

To that end, let’s take a look at the best and worst of the Chayka era in Arizona. We will start on a positive note.

When Chayka took over the Coyotes front office, they had quite the goaltending quagmire. Veteran Mike Smith was still playing decent hockey, but the 35-year-old was not a long-term solution for the Coyotes. The options behind Smith, like now-journeyman Louis Domingue, were not viable options. So Chayka made not one, but two big trades. Those included:

- Acquiring goalie Antti Raanta from the New York Rangers as part of the larger Derek Stepan trade in exchange for Anthony DeAngelo and the seventh-overall pick in the 2017 Entry Draft.

- Acquiring goalie Darcy Kuemper from Los Angeles in exchange for Scott Wedgewood and Tobias Rieder during the 2018-19 season.

Raanta and Kuemper have turned out to be as strong as any tandem in the league. In fact, over their respective timespans with the Coyotes organization, you couldn’t find another goalie more effective at stopping shots – their four-year run sees them sit one and two, respectively, in all situations save percentage.

Even adjustments for shot quality end up painting them in a better light (particularly Raanta): 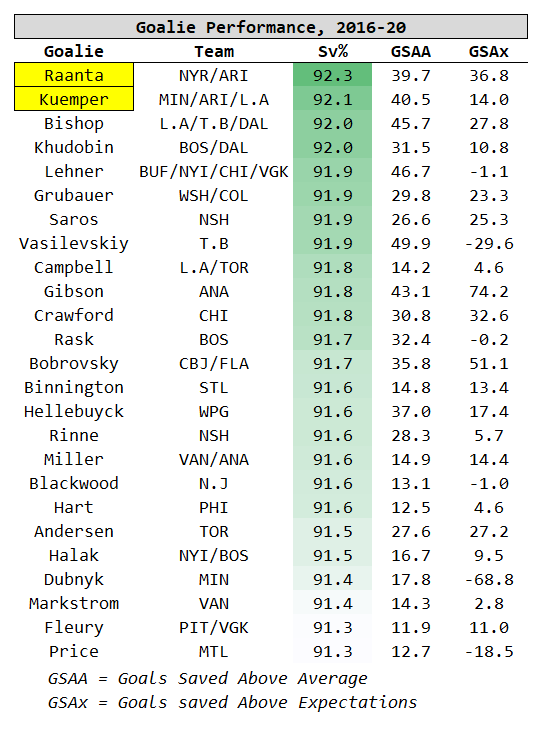 The key takeaway here is twofold. Chayka brought in a highly effective goaltending tandem at the cost of less than one bona fide starter. Raanta ($4.25 million) and Kuemper ($1.85 million jumping to $4.5 million next season) have a combined cap hit that is less than seven active goalies around the league and equal to Braden Holtby ($6.1 million) this season.

Not only did Chayka improve a fairly dire goaltending situation, he did so at a reasonable cost. Add the fact that a goaltender like Kuemper is signed to a low-cost, team-friendly deal through 2022, and you can see why this was such an impactful series of moves.

The Bad: A Punchless Offence

While Chayka was able to shore up the team’s goaltending needs, he wasn’t nearly as effective at finding scoring.

In the year preceding Chayka’s hiring, the Coyotes were struggling to score, averaging just about 2.5 goals per game – good enough for 24th in the NHL. That roster was a spare parts team if there ever was one, with a number of players on expiring contracts looking for their next NHL home.

Over the next four years, the Coyotes would actually see their scoring drop, despite league trends running in the opposite direction. Their 2.4 goals per game from 2016 to 2020 would end up finishing just a rounding error ahead of the Detroit Red Wings for last in the NHL.

Looking at these teams side-by-side, it’s easy to see why there wasn’t much of a scoring change. Every player added to the lineup who proved to be an effective top-nine scorer was displacing an already rostered player – say Max Domi or Anthony Duclair – who would prove to be an equally effective scorer in other markets. 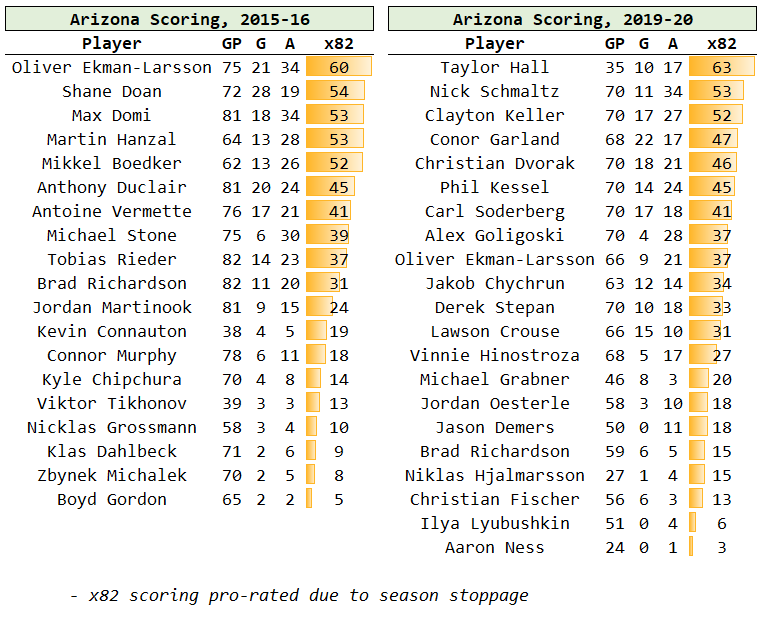 It’s not that Arizona didn’t recognize this as a need – the team made major moves to acquire players like Hall, Stepan and Phil Kessel (more on this in a moment) in an attempt to throttle scoring within the top six. The Hall move – though we only have a half-season worth of data on it – suggests he did have quite a positive impact on Arizona’s offence. Beyond that, the jury is still out.

Chayka has made some shrewd bets. It does not appear that the Kessel gambit will be one of them.

For close to a decade, Kessel was one of the league’s more underrated players. Front offices, coaches and fans could not wrap themselves around the concept that a player like Kessel – questionable on the defensive side of the ice and not exactly chiseled out of granite – could be such a dynamic attacker. But he was for years in Toronto and Pittsburgh, and that’s only been appreciated after the fact.

When the Coyotes acquired Kessel, it was perhaps the biggest splash of Chayka’s tenure. He was taking advantage of a falling out between the Penguins and the player, and usually that sort of discount bodes well for the purchasing team.

In the deal, Arizona acquired Kessel (along with a prospect and a pick) for Alex Galchenyuk and Pierre-Olivier Joseph. Most of the trade was about Pittsburgh relieving themselves of a contract with heavy salary cap implications, even on a back-diving deal. (Arizona, it should be noted, only picked up a part of the contract thanks to prior trade retention from Toronto.)

The problem here is that all of the things that made Kessel underrated for years – his sheer production outweighing immaterial concerns – has started to flip. Part of that is because Kessel is 32 years old and the mileage has started to accumulate. But if we are starting to see signs of Kessel’s offensive decay, that’s a real problem for a team that has top-six expectations.

If we overlay Kessel’s rate scoring against his Goals Above Replacement contributions (an all-encompassing regression-based measure that considers the value created by Kessel across all game states, and on both ends of the ice), you can see that there are real signs of diminishment. 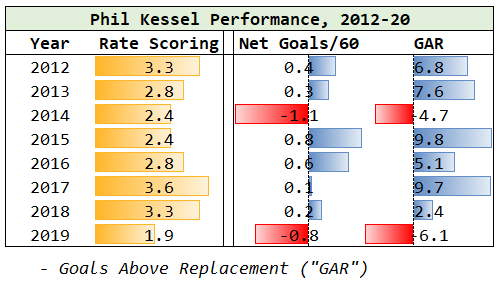 It’s only been one season, and there may be opportunity to salvage something from Kessel here. But Arizona paying nearly $7-million in cap space for a player scoring at a third-line rate and being routinely outscored at even strength is a massive concern, especially having played with competent teammates in the regular form of Stepan, Keller and Oliver Ekman-Larsson.

If 2019-20 is a harbinger of things to come for Kessel and the Coyotes, this story could end up very sour. Unlike most of Chayka’s bets, this deal carried some degree of risk, and that risk has heightened with the salary cap expected to stay flat for some time.
Arizona needs to focus on returning Kessel to form, or this contract will be a pox on their overall cap situation until it expires in 2021-22.