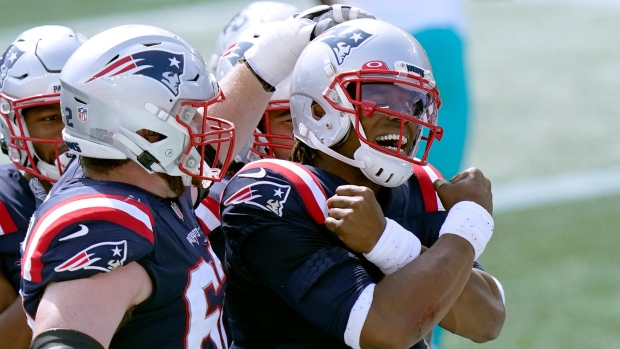 The Latest on Week 1 in the NFL (all times EDT):

The Los Angeles Rams have taken a 7-0 lead over the Dallas Cowboys with a dominant first quarter in the inaugural game at SoFi Stadium.

Robert Woods caught a 20-yard pass from Jared Goff on the first play from scrimmage in the $5 billion stadium. Malcolm Brown scored its first touchdown, going in from short yardage to cap a 75-yard drive.

The Rams’ lead could have been even bigger, but rookie kicker Samuel Sloman clanged his first career field goal attempt off the left upright with 2 seconds left.

The Big Three veterans quarterbacks who changed teams in the off-season had a mixed debut Sunday with their new teams.

Tom Brady and the Buccaneers lost to Drew Brees and the Saints xx-xx in Brady's first game not in a Patriots uniform.

Brady has now lost three consecutive starts for the first time since 2002 when he lost four in a row. He's also lost five of his last seven starts.

Brady's Buccaneers lost 34-23 to the Saints in one of four late afternoon games. The defending NFC champion 49ers lost 24-20 to the Cardinals and the Chargers rallied past the Bengals 16-13.

Only one stadium allowed fans to watch the action on the NFL's opening Sunday over coronavirus concerns.

That was in Jacksonville, where the Jaguars were allowing 16,800 tickets to be distributed for their game against the Indianapolis Colts. However, only 14,100 fans showed up to watch the Jaguars beat the Colts 27-20 and spoil Philip Rivers' debut for Indy.

The Chiefs allowed 16,940 fans at their game Thursday night to kick off the 2020 season.

Both Monday night games — at Metlife Stadium and Empower Field — will also be without fans.

While some teams have ruled out spectators for the entire season, many are planning to allow a few thousand fans into upcoming games.

Alvin Kamara’s touchdowns on a 12-yard reception and 6-yard run on successive possessions have thrust the New Orleans Saints ahead of Tampa Bay 14-7 in the second quarter.

The game pits quarterback icons Drew Brees and Tom Brady, who is making his debut for Tampa Bay after 20 years and six Super Bowl rings in New England.

Kamara’s multiple touchdown game comes a day after he signed a five-year extension worth up to $75 million.

Joe Burrow’s first NFL touchdown came on a draw play that took the Chargers by surprise.

Burrow ran 23 yards up the middle to put the Bengals up 7-0 in the first quarter in Cincinnati.

Burrow was 6 of 10 for 39 yards with one sack. The Bengals are hosting the Chargers without fans at Paul Brown Stadium.

Tom Brady’s maiden drive in a Tampa Bay Buccaneers uniform came to a familiar conclusion -- with the former Patriots star spiking the ball emphatically in the end zone after a short quarterback keeper.

Brady completed two passes for 37 yards and did not throw an incomplete pass during the series, which put Tampa Bay ahead 7-0.

Brady’s first pass attempt was intended for tight end O.J. Howard, who was ruled to have been interfered with by safety Malcolm Jenkins.

Soon after, Brady lofted a 26-yard pass down the right side to Chris Godwin, putting the Bucs across midfield.

The Bucs benefited from another pass interference call when Brady attempted to hit Mike Evans deep down the left side at the New Orleans 16.

Tom Brady has scored on a 2-yard keeper for his first touchdown with the Tampa Bay Buccaneers.

Brady completed both of his passes for a total of 37 yards and his first run was from the 2. He spiked the ball like Rob Grownkowski when he barrelled into the end zone to give the Buccaneers a 7-0 lead over the New Orleans Saints.

Brady joined the Buccaneers this off-season after 20 years and six Super Bowl rings in New England.

The first Sunday games of the 2020 NFL season are in the books.

Among the big winners were the Green Bay Packers who survived a 24-point fourth quarter to win at Minnesota 43-34 behind Aaron Rodgers’ four touchdown passes.

Cam Newton won his debut with New England, leading the Patriots past Miami 21-11, and the Las Vegas Raiders beat Newton’s old team with a 34-30 win over the Panthers.

The Super Bowl champion Chiefs kicked off the season on Thursday night with a 34-20 win over the Texans.

There are four more games today including Tampa Bay at New Orleans in Tom Brady’s Buccaneers debut. Opening weekend raps up tomorrow night with the Giants and Broncos playing at home.

The NFL and DISH Network have reached a new carriage agreement that restores NFL Network and NFL RedZone to Dish TV and Sling TV.

The agreement was announced right as the Sunday 1 p.m. EDT games started. The channels were dropped in June.

New York Jets running back Le’Veon Bell’s return is considered doubtful because of a hamstring injury, the team announced early in the fourth quarter of its game at the Buffalo Bills.

Bell has been limited to six carries for 14 yards, and two catches for 32 yards.

The Buffalo Bills are down two starting linebackers with Tremaine Edmunds being treated on the sideline with a right shoulder injury.

Edmunds was hurt while attempting to tackle Jets receiver Jamison Crowder on a 69-yard touchdown catch and run. Edmunds went right shoulder first into Crowder, who bounced off the tackle and zipped up the right sideline off a screen pass. The touchdown, with 5:10 left in the third quarter, cut Buffalo’s lead to 21-10.

The Bills ruled Edmunds’ return as being questionable.

Buffalo is already with out starting outside linebacker Matt Milano, who was ruled out with a hamstring injury sustained in the second quarter.

Lions linebacker Jamie Collins was ejected in the first half against the Bears when he made contact with an official.

And several players have left their games with injuries.

Among them are Packers nose tackle Kenny Clark (groin) and guard Lucas Patrick (shoulder), who got hurt at Minnesota.

Buffalo Bills starting linebacker Matt Milano has been ruled out from playing the second half against the New York Jets with a hamstring injury. Milano had a leaping interception at midfield of Sam Darnold’s pass late in the second quarter.

Colts running back Marlon Mack left the game at Jacksonville with an ankle injury just before halftime and has been ruled out.

James Robinson has made NFL history with the Jacksonville Jaguars today.

Robinson carried 10 times for 61 yards in the first half against Indianapolis, breaking the league’s previous best mark of 44 yards for undrafted rookie running backs in season openers.

Washington’s Ralph Nelson held the previous high for rushing yards by an undrafted rookie in Week 1, gaining 44 yards against New Orleans on Sept. 21, 1975.

But the feat has been much rarer for tailbacks.

Tampa Bay’s Bruce Perkins and Seattle’s Derek Loville were the last to do it, getting Week 1 nods in 1990.

The Colts lead the Jaguars 17-14 at halftime.

Detroit Lions linebacker Jamie Collins has been ejected in the second quarter against Chicago after making contact with an official with his helmet.

It didn’t look like an aggressive gesture -- Collins may have been trying to demonstrate something that had happened on the field -- but the result was that Collins made contact with the official’s chest.

Both the Seahawks and Falcons honoured the late U.S. Rep. John Lewis, an icon of the civil rights movement who died in July after a battle with pancreatic cancer.

The Falcons and the Seahawks wore white armbands featuring the initials of the late Georgia Democratic congressman and logos of each team.

The Falcons also wore shirts that featured a quote from Lewis on the front and the team’s Rise Up & Vote logo on the back during pregame warmups. The quote from Lewis: “The Vote is the most powerful, nonviolent change agent you have in a democratic society.”

In a statement issued by the team, defensive end Steven Means said, “We’re taking this moment and making it a movement, not just as a race, a community or a team, but as a nation, ... It’s time to stand up, rise up and vote.”

The Falcons also honoured Lewis as an honorary captain for the game.

Players and coaches kicked off the 2020 season in different ways when it came to social justice messages. Some knelt. Some stood. Some didn’t come out for the national anthem.

The Minnesota Vikings locked arms in the end zone about a half-hour before their game against Green Bay for the recorded performance of “Lift Every Voice and Sing,” after nine family members of the late George Floyd were recognized on the video board from their perch in the upper concourse.

The group included three brothers and one sister of Floyd, the handcuffed Black man who died on May 25 about three miles from the stadium when a white police officer pressed his knee against Floyd’s neck for nearly eight minutes.

In Detroit, the Lions lined up shoulder to shoulder at the goal line and the Bears faced them as they stood side by side 80 yards away. After a moment of silence, the videoboards showed Alicia Keys singing “Lift Every Voice.”

In Jacksonville, Colts coach Frank Reich took a knee during the national anthem, the only one on the sideline to do so. The Jaguars were in the locker room.

Neither the Bills or Jets were on the field in Buffalo for the “Star Spangled Banner.”

In Cleveland, Browns star defensive end Myles Garrett one of three Cleveland players who knelt during anthem in Baltimore. Baker Mayfield announced yesterday on Twitter he had changed plans and stood.

It’s here! The 2020 NFL season kicks off today with 14 games after a strange off-season in which teams learned their playbooks via videoconference and didn’t play any preseason games.

Some stadiums are empty, others have a spattering of fans but mostly empty seats because of the coronavirus pandemic.

Players and coaches have been tested daily for COVID-19, the disease caused by the novel coronavirus.

Teams also are planning different ways to stand up against racial injustice following a summer of protests across the globe sparked by George Floyd’s death in police custody in Minneapolis.

Some players are kneeling during the national anthem like Colin Kaepernick did several years ago when he started bringing attention to social injustices.

The Washington players and members of the Philadelphia Eagles lined up together, forming an oval prior to their game.