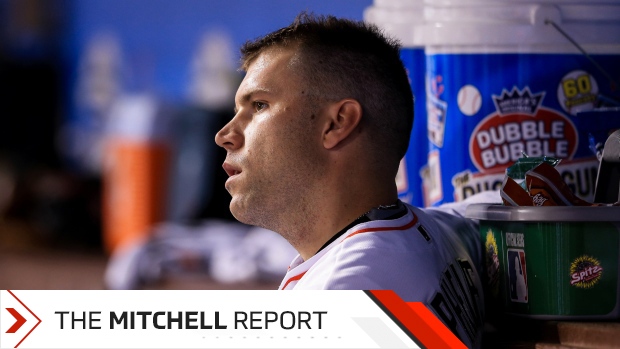 Veteran reliever David Phelps made his first appearance in a Toronto Blue Jays uniform on Monday after nearly two years of recovering from Tommy John surgery, but the reality is that Charlie Montoyo’s club is 20 games under .500 and every veteran on the roster is a trade chip. TSN Baseball Reporter Scott Mitchell checks in with news and notes on the Jays.

TORONTO — His elbow reconstruction now in the rear-view mirror, David Phelps is finally a member of the Blue Jays bullpen for the first time.

But for how long?

That may seem like an odd question considering the 32-year-old reliever just made his first appearance in a Blue Jays uniform on Monday, but the reality is that Charlie Montoyo’s club is 20 games under .500 and every veteran on the roster is a trade chip.

Yes, even those who didn’t pitch in a major league game for more than 21 months.

Signed by general manager Ross Atkins in January to an incentive-laden one-year deal with a club option for 2020, Phelps has about six weeks to prove his health to other clubs around baseball, and it could, perhaps, be enough to prompt a bullpen-needy team to take a chance at the July 31 trade deadline.

If the results aren’t there or the Jays decide the market isn’t offering up fair value, Atkins could easily pick up the option for next season — how much it’s worth is tied to the number of appearances he ends up making, but it’s a no-brainer if he pitches well — and place Phelps in a key setup role to begin 2020.

There’s also a chance Phelps could be in the mix for saves, depending what happens with fellow right-hander Ken Giles, who will be one of the top relievers on the July market if he returns no worse for wear from his current IL stint, which the Blue Jays expect to happen later this week.

Phelps isn’t thinking much about where he’ll be pitching.

It’s all about finding his footing after a long layoff and letting everything else fall into place.

“I don’t think it’s really sunk in yet, fully,” said Phelps, whose debut Monday consisted of a scoreless inning and his fastball topping out at 91.8 mph. “Over the last month or so when I’ve been thinking about it or whatever, you get a little bit emotional. It’s been a good while since I’ve been on an active roster. The last game I pitched was August 30 of 2017. I had surgery that September (on a bone spur in right elbow) and followed up by Tommy John last spring. There’s been a lot of people behind the scenes, family, support staff that have helped me get to this point.

“It’s definitely been a grind, especially these last 15 months.”

Prior to his elbow giving out on him, Phelps was morphing into one of the better setup men in baseball.

Shifted to the bullpen full time in 2016 by the Miami Marlins, Phelps posted the best season of his career, pitching to a sparkling 2.28 ERA across 86.2 innings.

His 1.4 fWAR out of the bullpen that year made him the 23rd most valuable qualified reliever in all of baseball, ahead of closers like Craig Kimbrel (1.2 WAR), Alex Colome (1.1 WAR) and Cody Allen (1.0 WAR).

With the elbow barking in 2017, Phelps’ ERA jumped to 3.40, split between the Marlins and Seattle Mariners, before he succumbed to TJ in March of 2018.

“Tommy John is interesting,” Phelps said. “It’s kind of been normalized in our game. A lot of guys have it, a lot of guys come back from it. But it’s such an individual rehab in itself and there’s definitely a lot of trying times and I wouldn’t wish it on my worst enemy.

“There were some pretty dark times, but it’s always fun when you see that light at the end of the tunnel, not to be too cliche about it. I thank this organization incredibly for taking a chance on me in the off-season (while) I was still in the middle of my rehab. I’m excited to get back out there and doing what I love.”

With Edwin Jackson getting lit up for seven runs in just two-thirds of an inning Monday behind opener Derek Law, the Jays may be searching for a fifth starter once again.

One option down the road could be right-hander Nick Kingham, who was acquired last Thursday from the Pittsburgh Pirates in exchange for cash.

Seen as a top 100 prospect a couple of years ago, the 27-year-old has struggled mightily in the majors, registering a 6.71 ERA across 112.2 innings, which includes his two-inning Jays debut over the weekend.

Kingham uses a five-pitch mix, but the issue is each of those offerings has been pounded this season.

The lowest batting average comes against his curveball, but at .297 he’s still turning the opposition lineup into a bunch of .300-hitting hall of famers.

Kingham started four games for the Pirates this season before being designated for assignment, and he may get another shot with the Jays out of necessity.

One prospect who seemed like an option two weeks ago is right-hander Patrick Murphy, but the 24-year-old right-hander has struggled in consecutive starts for Double-A New Hampshire.

It’s a similar story with Triple-A right-hander Sean Reid-Foley, who would’ve been in the rotation weeks ago if he was performing well, but too many walks have once again been the issue.

Since returning from a three-week stint at Triple-A Buffalo, Teoscar Hernandez has looked a whole lot more comfortable with the bat in his hands.

Given a challenge assignment of handling centre field, Hernandez hasn’t made an error, but the advanced metrics aren’t a fan of his work with a minus-4 Defensive Runs Saved mark in just 88 innings coming into Monday’s series opener against the Los Angeles Angels.

Behind the scenes, the Jays don’t really care about the defence, they’re simply trying to figure out if Hernandez can hit enough to be a part of the plan in 2020.

Now that 2019 first-round pick Alek Manoah has officially put pen to paper and signed his first professional contract, 2017 first-rounder Nate Pearson’s debut might shed some light on where the big right-hander will start.

Two summers ago, Pearson made a brief one appearance stop with the Jays’ Gulf Coast League affiliate, before being assigned to the Northwest League’s Vancouver Canadians where he made seven truncated starts.

Due to a heavy workload at West Virginia this spring, Manoah won’t have many innings left in the tank this summer as the Jays take it easy with the 11th overall pick.

But there’s no doubt the 6-foot-6 right-hander helps add some high-end pitching depth to the system.

“That is an area that we felt we could benefit from adding, and adding an advanced college pitcher was the ideal scenario, but we also had to ensure it was the best talent available at that selection time, and it was,” Atkins said.

The Jays have signed all but two of their top 10 picks, with third-round outfielder Dasan Brown, an Oakville product and the top Canadian selected in 2019, and Vanderbilt catcher Philip Clarke, who was drafted in the ninth round (267th overall), left to go.

Atkins is hoping to sign Brown away from a commitment to Texas A&M.

“Plus athlete, plus speed,” Atkins said. “He has a chance to be an above average defender and, really, dare I say, a five-tool player. That’s really exciting for us.”