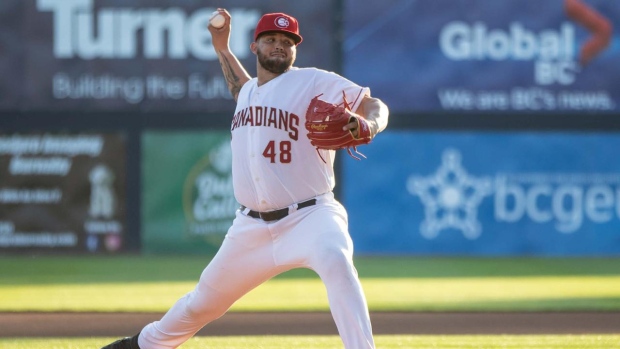 TORONTO — About a 30-minute drive to the west of Houston sits Sugar Land, Texas, a city of 120,000 residents and one well-known independent league baseball team named the Skeeters.

Over the years, many a former major leaguer has shown up in Sugar Land trying to revive a career. The franchise has never been one to shy away from headlines, even allowing Tracy McGrady to take the mound back in 2014.

The uniqueness of the baseball landscape in 2020 has the Skeeters roster once again loaded with former MLB talent looking for a place to play this summer, with the newly formed four-team Constellation Energy League giving out-of-work professionals a way to stay sharp.

Despite still having a job, Toronto Blue Jays prospect Adam Kloffenstein is one of them.

For a brief moment, he was a member of the Skeeters, before an independent league trade sent him to Team Texas, a squad put together by Roger Clemens and managed by his son, Koby Clemens.

It’s a unique career chapter that never would’ve been written had it not been for a pandemic.

“I’ve always known about them and stuff, but obviously never dreamed I’d play for them or anything,” said Kloffenstein, who will celebrate his 20th birthday next week. “But I also didn’t think I’d get sent home from spring training due to a virus overnight.”

There’s only one goal for Kloffenstein, who the Jays selected 88th overall back in the 2018 draft and handed an over-slot bonus of $2.45 million to lure into the organization: Get some work.

Combining two appearances with the Skeeters and five more with Team Texas, a group of players and coaches made up of mostly former U of T Longhorns — “a lot of burnt orange going on,” Kloffenstein noted — the 6-foot-5, 243-pounder holds a 6.46 ERA across 15.1 innings.

Of the 120 players or so in the Constellation Energy League, an estimated 70 of them have MLB or Triple-A experience.

“As far as experience goes, I’m in way over my head,” Kloffenstein said. “I’m still 19 and the next youngest guy in the whole league is 23. It’s interesting.

“I’ve struggled some, which I’m not used to doing, but it’s good for me. It’s only going to make me better.”

It’s rare for an MLB team to allow one of their best prospects to suit up for an independent league team in the sweltering Texas heat, but this is where we are.

Normal is out the window this year.

One thing Kloffenstein gets that many of his teammates inside the Blue Jays organization won’t come close to this year is playing in front of fans.

The Constellation Energy League is allowing 30 per cent capacity, which means a couple thousand fans are laying eyes on Kloffenstein’s appearances during a weekend sellout.

“It’s fun and extremely wild, but it’s interesting,” Kloffenstein said. “There’s a lot of hoops we have to jump through, day in, day out with all the testing and masks and staying at the hotel and not really venturing out.”

When Kloffenstein’s agent brought the idea to the Blue Jays it was met with some skepticism, as you might expect.

“I was really wanting to go up to Buffalo or Rochester, but now that I’ve done this and talking to some guys in Rochester, I think I’ve got just as much development as I would’ve up there and I’ve met some new people and I’ve learned some things on and off the field that I probably would’ve have from hanging around some big-league guys and stuff like that. I’m thankful that this interesting opportunity came up.”

Not only has Kloffenstein learned a lot facing hitters with experience in the high minors, the big right-hander has also experienced a jump in velocity.

Last summer, as he authored a 2.24 ERA across 13 starts for short-season Vancouver, Kloffenstein’s average fastball sat in the 91-93 mph range.

A lot of that, he says, had to do with a shoulder issue that led him to working on strengthening exercises at a Houston clinic all last winter, a move that is paying off in spades.

“We tried to keep this pretty private, but last year during the whole season I was battling some shoulder impingement stuff. It wasn’t a big deal, but it was just kind of locking me up,” Kloffenstein said.

Now, Kloffenstein has been touching 99 mph and working through the process of getting used to his newfound velocity.

“When my velo ticked up when it did, all of my secondary pitches ticked up and it made them not as a good because I’m not used to it,” Kloffenstein said. “My slider’s been up to 90, which last year it was like 82-84. My changeup last year was 84-86 and it’s up to 90, as well. My curveball was 77-78 last year and now it’s sitting at like 80. I’m not saying they’re not as good as they were, they’re just different pitches now.”

It’s been a summer of experimenting, messing with pitch grips, wrist angles and just about everything else.

The Blue Jays, of course, have been extremely interested in getting feedback and staying in touch.

“They check in with me more than my own mother,” Kloffenstein said with a laugh. “I talk to someone from the Jays, whether it’s nutrition, whether it’s front office, strength and conditioning, pitching coaches … I talk to someone from the Jays probably five to six times a week, mostly every day. They’re getting all the TrackMan data, so it’s been good. I understand they want to check in and they don’t get to lay eyes on what I’m doing down here and that probably bugs them a little bit.”

The ceiling on Kloffenstein is huge if things click, and he’s one of the handful of arms within the Blue Jays’ system that you can point to with a potential top-of-the-rotation future.

Including Kloffenstein, here’s a look at three of them: 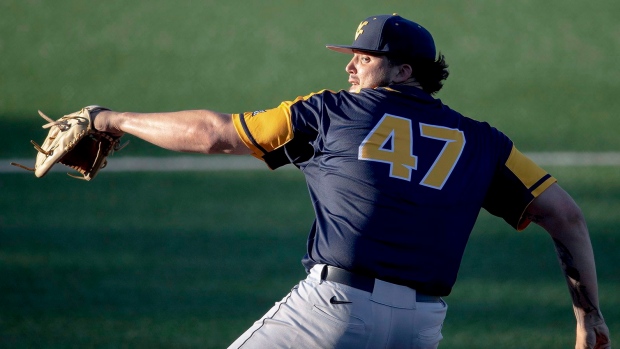 The massive right-hander was supposed to start his Nate Pearson development plan this spring and head to High-A Dunedin, where good results as a starter would have sent his prospect stock skyrocketing.

When comparing Manoah to Pearson, it’s the same base set of attributes and skills: A big body capable of handling the rigours of hauling innings, a high-90s fastball, and a wipeout slider.

Whether Manoah can refine things as quickly as Pearson and how the changeup comes along will tell the story from there.

Unfortunately, the West Virginia Mountaineers product will have to wait until 2021 to put the wheels in motion.

Right now, with just 17 short-season innings under his belt, Manoah is tough to fully evaluate, but it wouldn’t take long to turn people into believers if he has success early on next year.

Similar to Pearson two years ago, there’s an enviable fallback plan if Manoah’s development takes a different turn, with high-leverage reliever an easy projection thanks to the power fastball-slider combination. 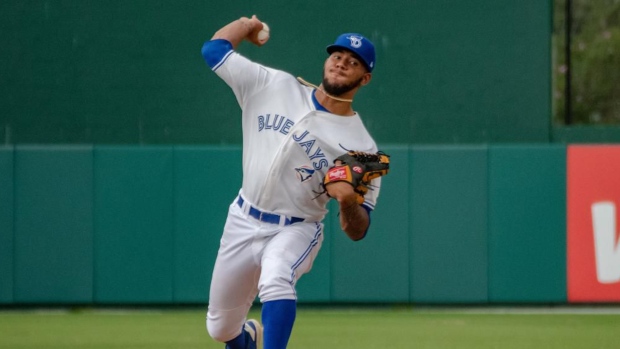 What a difference a year makes.

When the Marcus Stroman trade went down last July, it was Simeon who? For most, anyway.

But it didn’t take long for SWR to morph from little-known New York Mets right-hander to top 100 prospect, as the late-season reports once he joined the Blue Jays were terrific.

At the age of 18 in six High-A in Dunedin, Woods Richardson authored an impressive 2.54 ERA, using his fastball-changeup combo to strike out 9.2 batters per nine, limit walks (2.2/9) and keep the ball in the yard (just one homer allowed).

Fast forward a year and Woods Richardson was a good run at Double-A away from really bursting onto the prospect scene and really making the Stroman trade look like a huge win for the Blue Jays, especially considering the diminutive righty’s opt-out with the Mets.

In the end, the Mets got 11 starts and a 3.77 ERA out of Stroman, while the Jays have lefty Anthony Kay on the big-league staff — so many years of control, as GM Ross Atkins would say — and SWR percolating in the 60-man player pool.

Comparisons are tougher for pitchers than they are for hitters, but SWR’s changeup is his best secondary, similar to Giolito, while he has a pair of breaking balls that are improving.

It could be a legit four-pitch mix when all is said and done.

Given the delivery and repertoire, his future in a rotation seems safe, but it could be the back end if things don’t click. 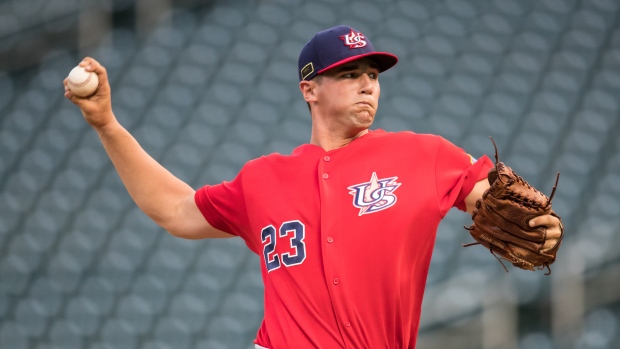 When scouts started evaluating the 2018 draft class, Kloffenstein was not only one of the youngest players in his draft class, he was also showing a Justin Verlander starter kit with a mature frame and a low-maintenance delivery.

Verlander, of course, was the second-overall pick out of college in 2004, so the comparison was a huge projection — all of them are, truthfully — but that was the allure of Kloffenstein as a top 50 draft prospect, one who fell to the Jays at pick No. 88 due to signability concerns.

“That’s my favourite compliment that I get because he’s one of my favourites, if not my favourite to watch,” Kloffenstein said. “We’re a similar size, similar stuff with good fastballs and good secondary stuff, not a guy just out there throwing heaters hoping it doesn’t get hit.”

The Jays had to ante up $2.45 million to get Kloffenstein inked, so you know they were high on the 6-foot-5 right-hander.

Similar to the other two names on this list, Kloffenstein’s prospect status could change exponentially if he were to get good results in the high minors, something he hasn’t had the opportunity to prove yet.

As of today, the mid-90s sinking fastball is developing nicely, the slider is good, while scouts also like his curveball.

Here’s something you’ve heard time and time again with young pitchers: The development of his changeup will be key.

A 2.24 ERA and a 60.1 per cent groundball rate across 13 starts at short-season Vancouver as an 18-year-old was a great start, convincing many that his future lies in an MLB rotation.

The next couple of years will give a good indication of whether that’s at the front or the back.​