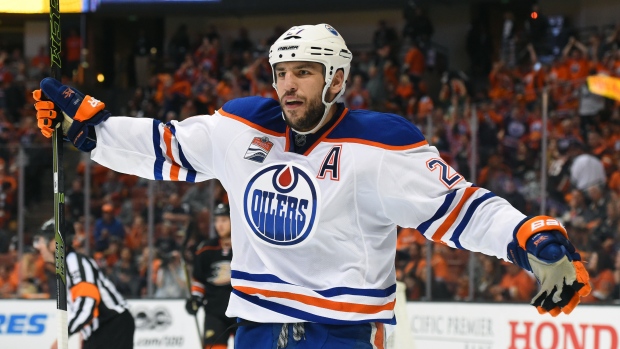 A few weeks ago, The Score put together a list of the 10 worst current contracts in the National Hockey League, excluding those eligible to be placed on long-term injured reserve. The 10 contracts they designated as the worst around the league were based on cap hit, term, and expected value over the duration of the contract.

While any list of worst (and best, for that matter) contracts will vary from individual to individual, I don’t think there’s any dispute that the 10 deals they arrived at are pretty penalizing. Their list, just to itemize it for this piece, was as follows:

There are an awful lot of commonalities between these contracts. The majority of players were paid based on what they had previously accomplished, and not necessarily what they were going to accomplish going forward. I know this because, among other arguments, the average age of the group is 33 – about seven years above the current league average.

The aging curve is a very real and very understood phenomenon in sports (the NHL is no different), but that’s never stopped teams from spending a ton of money either extending players into their 30s or signing them out of unrestricted free agency. But there’s still plenty of room in today’s game for older players – especially older players who have a long and established track record of producing. Sidney Crosby is 32. Patrice Bergeron is 34. Alex Radulov is 33. Mark Giordano is 35.

There is something different about this group. There isn’t a single player on this list whose signing or extension wasn’t panned (in some cases, universally panned) by the stats community. So I wanted to go back through all 10 of these players with some of the newer data we have available, predominantly publicly available Goals Above Replacement models, to see if any of these contracts were defensible when the pen hit the paper.

I’m going to focus on the nine skaters for the sake of this piece for two reasons. One, we can get a true apples-to-apples comparison for our skater group. Two, the goaltending position is much more volatile than skaters, and to some degree there’s a bigger expectation for error when forecasting performance there.

Let’s take our nine skaters and look at how they performed in the two seasons preceding signing or extension, the first season after signing the contract, and the two subsequent seasons where applicable: 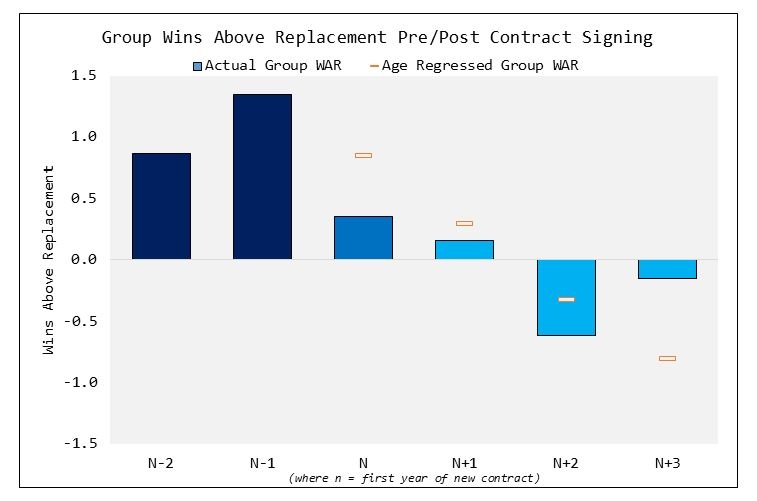 At first glance, you might suspect that these front offices had a terrible run of misfortune. The two seasons preceding the contract signing or extension saw value-added performance from our skater group. (A 75th percentile skater, regardless of position, adds about one win to the standings each year.)

But there are two major caveats here. The first is that this segment appears to be biased by a bunch of incredible ‘contract year’ performances. Eriksson just so happened to have his best campaign ever in his final season with Boston prior to signing a contract with Vancouver. The same is true for Okposo in his final season with the Islanders before signing his mega-deal with Buffalo. Milan Lucic had his best year ever in his one season with the Los Angeles Kings, posting a Wins Above Replacement value more than triple his historical average.

We know there were some unnatural, outlier-type seasons in the year leading up to their new contracts. But that alone doesn’t make any signing or extension a bad decision. Sometimes players have outlier years and those outliers are more indicative of the future than we think – William Karlsson in Vegas comes to mind as an immediate example.

That brings us to the second issue. I plotted an age regressed Wins Above Replacement value based on the makeup of the class we’re studying. Knowing only the calibre of the players in the pool and their respective ages at the time of the signing, we can use regression models to forecast expected changes in performance.

And guess what? It looks eerily similar to what we have actually seen as it relates to performance degradation, at least through our N+2 season – the majority of the players in the group, including that infamous July 2016 class, are entering their N+3 year. If you are to believe that performance is predictable and age degradation is real, then you have to be extremely concerned about what these players will look like entering the 2019-20 season.

It’s easy to point to bad contracts after the fact. But there is good reason why these contracts – long-term, expensive deals for second-tier players entering their 30s – generally turn into disasters, and why the stats community has always been averse to this type of signing.

This is certainly something to think about when considering recent long-term deals signed by the likes of Anders Lee, Kevin Hayes, Tyler Myers, Mats Zuccarello, and even Sergei Bobrovsky. One of these contracts might pan out, but most of them won’t. And a few years from now, a postmortem on how these contracts came to be will look virtually identical to this piece.