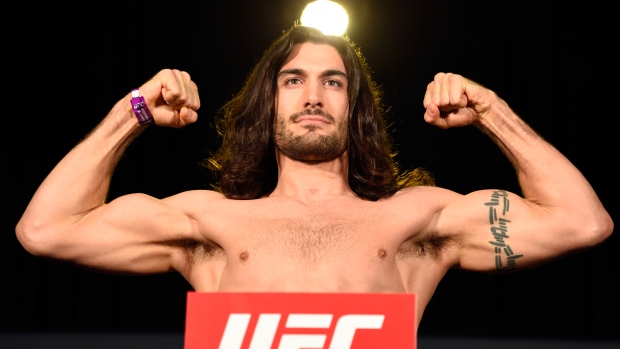 Elias Theodorou’s next fight is against Eryk Anders at UFC 231 Dec. 8 at Toronto’s Scotiabank Arena, but right now he’s focused on a bigger fight that’s taking place outside of the octagon.

With the legalization of cannabis in Canada for both recreational and medicinal purposes coming into effect on Wednesday, Theodorou chose the same day to make public a behind-the-scenes process he’s been working on with the United States Anti-Doping Agency (USADA) on their medical marijuana policy for athletes during in-competition periods. The Toronto native hopes to become a pioneer by obtaining the first-ever Therapeutic Use Exemption (TUE) for a mixed martial arts athlete from USADA, which would allow him to use cannabis in-competition.

In a recently penned open letter , Theodorou makes an impassioned plea for USADA – the official anti-doping agency of the UFC – to issue him the exemption so he can treat bilateral neuropathic pain in his wrists and elbows using medical cannabis during the in-competition window. The 30-year-old writes that the painful ailment has put him “at a competitive disadvantage” against UFC opponents, forcing him to turn to medical cannabis which has “proven to be an effective treatment.”

Theodorou writes that he has spent the last 17 months working with USADA and has provided the anti-doping agency with multiple submissions, including exhausting all first-line medications, which he says have caused him “debilitating side-effects.”

“USADA has acknowledged the legitimacy of my medical ailments, have not been difficult to work with and have been certainly helpful throughout the process,” Theodorou writes. “I recognize that being the first professional athlete to apply for a medical cannabis TUE would not be an easy, or quick, journey, and that changing USADA’s current classification would require a great deal of work.”

“It is more or less, a week out because in-competition is fight week. Cannabis stays in your fat soluble aspect, it actually will stay in an athlete much longer,” Theodorou told TSN. “What I’m trying to do in regards to medical cannabis is provide an alternative option for myself. This is a very individual aspect in regards to my personal medication and it’s doctor prescribed – my doctor feels that cannabis is right for me and, as part of the process, I’ve had to exhaust all other first-line medicines, whether opioids or other types of painkillers and the side effects have been just as bad, if not worse, than the actual ailment that I have.”

Jeff Novitzky, UFC’s Vice-President of Athlete Health and Performance, has been a valuable resource for Theodorou throughout this process and has provided clarification as to why cannabis is banned in-competition.

“THC (Tetrahydrocannabinol) is banned because, I think, of two of the three criteria that WADA (World Anti-Doping Agency) uses in order to put something on the banned list. First, a potential to enhance performance. I'm asked quite a bit about how the heck marijuana could enhance performance. Anecdotally, I've talked to a lot of guys that use it and do jiu jitsu, like roll on the ground and they say they're able to more singularly focus on what the next move coming they feel it's you know an advantage,” Novitzky told TSN.

“I think maybe it can deaden pain and maybe allow an athlete to take a little bit more damage than they would be able to otherwise and then I think the second criteria that it matches is the health and safety aspect. So if there's a health and safety issue of an athlete being on a certain substance while they're competing it could be on the banned list so I think it checks both of those boxes and it's the reason that it is banned.”

For those reasons, Theodorou was surprised to hear that an athlete could not use medical cannabis, but would be permitted to use other painkillers or opiates.

"When you start doing comparative analysis, which I do all the time between a Vicodin, between other opioids, anti-anxiety drugs like Xanax, a sleeping pill like an Ambien, looking at that and the potential side effects from those drugs versus marijuana, I think marijuana is on a much lesser scale than those,” said Novitzky. “So it is a bit surprising and challenging even to me why marijuana has a status and these other drugs and some substances don't.”

Even with an exemption from USADA, Theodorou would not be entirely in the clear for cannabis use during in-competition.

“If I get an exemption from USADA, that will transcend into all of WADA (World Anti-Doping Agency), so in many ways it would be a worldwide thing. The other aspect that comes into it is commissions – they override whatever USADA or WADA would deem acceptable, so it’s very much an individual commission aspect that will need to handle each fight.”

Novitzky is aware of this issue and both the UFC and USADA work hand-in-hand with the athletic commissions to protect the interest of the athletes.

“USADA and the UFC would honour that TUE, but state athletic commissions don't all necessarily honour the odd TUE, so this is something that we already do so that two to three months in advance of any event that we have, both the UFC and often USADA reach out to that respective Athletic Commission and basically goes over the rules,” said Novitzky. “It's not Jeff Novitzky approving TUEs, it's actually an independent body of expert physicians and scientists that specialize in the certain medical conditions and the substances used to treat them so they're the ones that decide if it meets all these criteria. Often times when commissions hear that and how detailed that is they say, ‘yeah absolutely we honour that, you guys are the experts,’ so that would be no different if Elias got the TUE for marijuana.”

Theodorou has also given credit to Novitzky and the UFC for their support throughout this arduous process.

“It was a great relief when I reached out months ago to the UFC and Jeff Novitzky,” writes Theodorou. “Many other athletes in professional sports have not been so lucky and would fear suspension, or worse, if they went public in a similar fashion. It is an honour to compete for an organization open to allowing me to freely, and without repercussions, make my voice heard, as both a patient and athlete.”

Despite supporting Theodorou’s efforts for a TUE, the UFC still has reservations regarding the full removal of THC from the in-competition banned substance list, but they are working on efforts to protect their athletes from being penalized for out-of-competition use detected during an in-competition test.

“We're a little bit on the fence,” said Novitsky. “No one in the UFC advocates the use of any drugs, in a perfect world, none of our athletes would need to use any, but the reality is they do suffer because there are side effects with any drug, but the reality is they they are suffering from some medical conditions and injuries where what these drugs can do for those would outweigh the side effects on it, so we've definitely had conversations with USADA, I'm not necessarily at this point, convinced that it should be taken off the list altogether.

“We've had a lot of conversations with USADA about is instituting some new testing technology that would only detect marijuana use literally within hours of that test and that test entails oral fluid; so basically some saliva spit into a tube would only pick up, not only marijuana but other recreational banned in competition... What we don't want to do is punish somebody who used an out-of-competition allowed substance like marijuana say two or three weeks ago.”

Theodorou feels that not receiving the optimal treatment for this ailment puts him at a competitive disadvantage. The Mayo Clinic describes bilateral neuropathic pain as damaging to a person’s peripheral nerves, which often causes weakness, numbness and pain.

Former NFL running back Mike James found himself in a similar situation as Theodorou. James applied to the NFL for a TUE after he found that medical cannabis was more effective than and less addictive than the opiates he had been prescribed, but was denied.

Theodorou is looking to receive the exemption prior to his UFC 231 matchup against Anders and hopes to know whether it will be issued by mid-November.

“It’s not just about me, it’s about athletics in general,” Theodorou told TSN. “I feel almost obligated to come out of the shadows with the process that I’ve been doing.”