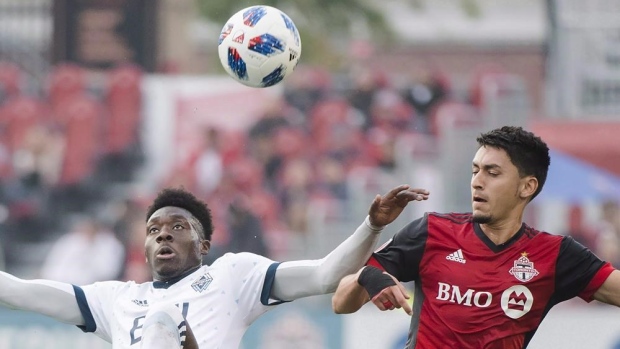 'These are the games you play for': short-handed Whitecaps in must-win situation Article Image 0 , The Canadian Press

Vancouver Whitecaps fullback Brett Levis knows that people don't expect his squad to be in the playoffs this season.

But Levis and his teammates are using their underdog status as fuel for their final three regular-season games of 2018.

"Nobody thinks we're going to make it and that's motivation for me and I think a lot of the guys," he said after training on Tuesday.

The Whitecaps (12-12-7) likely need to win all three of the matches to punch their card through to Major League Soccer's post-season and each of the games will be against teams above them in the standings.

On Wednesday, they'll take on Sporting Kansas City (15-8-8), who have hovered around the top of the MLS Western Conference for much of the season.

Sporting has already routed the Whitecaps once this year, posting a 6-0 win in a game that saw two Vancouver players sidelined after an on-field brawl.

But the 'Caps are still in charge of their playoff fate, Levis said.

"These are the games that you play for," he said. "We still have a shot. It's a bit of an uphill battle but that just makes it that much more fun."

Adding to the difficulty Wednesday will be the absence of some of Vancouver's key players.

Six of the team's usual starters have been called up to their national squads, including Alphonso Davies, Doneil Henry and Russell Teibert, who were slated to play for the Canadian men's team Tuesday night against Dominica.

Yordy Reyna, Kendall Waston and Aly Ghazal are also off on international duty.

Vancouver's interim coach Craig Dalrymple said the Canadians are due back mid-day Wednesday, but it's unlikely they'll see action against Kansas City. Still, Dalrymple said his group is "quietly confident" going into the match and ready for what Sporting may bring.

"I believe they'll come in and high press us and want to dictate the momentum in the game. And we're prepared for that," he said. "We think there's some chinks in their armour that we can exploit and I think we will."

Vancouver striker Kei Kamara has some unique insight into the opponents, having played more than four seasons in Kansas City. He trained alongside defenders Matt Besler and Ike Opara and under manager Peter Vermes.

"I know their strengths and weaknesses, which they might think they know about me. But I'm growing and learning every day," Kamara said.

The Whitecaps may be missing some players on Wednesday, but Kamara points out that everyone who will take the field has experience because Carl Robinson, the team's former coach, made thorough use of the entire roster.

"He's mixed and matched this lineup so much that everybody has played and it's just one of those games where everyone has to step in and do their job," he said.

The Whitecaps are coming off a win, having knocked Toronto FC out of playoff contention with a 2-1 victory on Oct. 6.

Vancouver keeper Stefan Marinovic is hoping for a similar performance against Kansas City, particularly when it comes to intensity.

"I hope when the ball is in our half, there's a certain amount of fight, of scrappiness," he said.

The team has faced challenges this season, including a coaching switch and some disappointing losses, Marinovic said. Now they need to rally and fight for their jobs.

"It's a measure of a man, how he reacts against adversity," Marinovic said. "This is a type of adversity and we want to come out on top."

CLEAN SHEET QUEST: Vancouver goal keeper Stefan Marinovic earned his first shutout in a Whitecaps uniform against Sporting Kansas City on Sept. 30, 2017. The 'Caps have posted a clean sheet only twice this year.

STRONG START NEEDED: The Whitecaps are 10-0-2 when scoring first this season, and 6-0-0 when they go into halftime with a lead.

PLAYOFF PICTURE: Vancouver sits in eighth place in the MLS Western Conference, three points behind Real Salt Lake, who hold the final playoff spot. The LA Galaxy are also fighting for a post-season berth and are two points up on the Whitecaps.