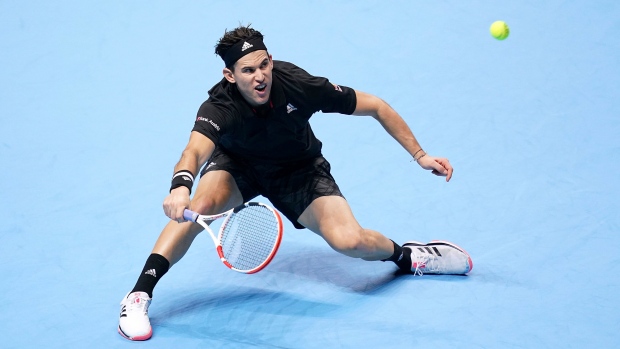 Thiem outlasted Stefanos Tsitsipas in a rematch of the 2019 final, beating the defending champion 7-6 (5), 4-6, 6-3 Sunday in the opening singles match of the tournament inside a largely empty O2 Arena.

In the late match, Rafael Nadal had a much easier time against newcomer Andrey Rublev, beating the Russian 6-3, 6-4 in just 1 hour, 17 minutes. Nadal is looking to cap a season in which he earned his record-equaling 20th Grand Slam title and 1,000th match win on tour by capturing his first trophy at the ATP Finals. He has qualified for the season-ending event for a record 16 straight years but lost in the final twice and missed six editions because of injuries.

“It’s important to start well, of course, for the confidence, because winning in straight sets helps,” Nadal said. "I played solid with my serve. I didn’t suffer much, and that helps to play more relaxed on the returns.”

Thiem, who won his first major at this year's U.S. Open, broke Tsitsipas for a 2-0 lead in the third set with a drop shot at the net and converted his second match point when Tsitsipas sent a forehand wide.

Tsitsipas beat Thiem in a third-set tiebreaker in last year’s final to clinch the biggest title of his career. But he let the first-set tiebreaker slip away this time, after leading 4-1 and 5-3. Facing set point, the Greek failed to put away a fairly simple overhead at the net before sending a lob long to hand Thiem the lead.

“That was the silliest thing that ever happened to me,” Tsitsipas said about his overhead shot. “I had ball over the net, and I decided to play forehand instead of a smash. I don’t know what kind of decision was that.”

Tsitsipas broke for a 2-1 lead in the second set with a forehand passing shot before levelling the match. He had a chance to break back at 3-1 in the third but netted a backhand, letting out a scream of frustration after the miss. Thiem eventually held serve after a game that went to six deuces, and was never troubled the rest of the way.

“That was crazy, I was pretty tight I must say in that game,” Thiem said about his hold for 4-1. “I think that was the last key moment where the match went finally in my direction.”

Nadal steered the evening match in his direction from the start, losing just five points on his serve in the first set. He broke for a 4-2 lead when Rublev sent a shot long, and the Russian then slammed his racket into the ground in frustration. Rublev entered the tournament as one of the hottest players on tour, having won five titles this season, but looked unsettled against Nadal and continuously gesticulated and shouted to himself between points.

Nadal broke in the opening game of the second set as well and never faced a break point of his own. He served out the win on his second match point when Rublev's return sailed long.

“In general I was serving not good at all, because I was a little bit nervous,” Rublev said. "And then when he broke me in the second set I relax and I start to serve much better. Then it was a different game, but it was too late.”

This is the 12th and last year that the ATP Finals is played at the 02 Arena before moving to Turin, Italy, next year. Because of the coronavirus pandemic there are no fans inside the 20,000-capacity venue this time — meaning the normally raucous atmosphere has been replaced by an eerie silence interrupted only by muted applause from the players’ boxes between points.

There are also no line judges, as the tournament is using electronic line calling for the first time. The system means players can no longer challenge whether a ball was in or out as those calls get made automatically. However, they can request a video review for other disputed situations, such as double bounces.

“The electric line call, I like it a lot,” Thiem said. “Because, well, there are no wrong decisions anymore. I mean, if the electric system calls it out, it’s out.”

Before the opening match, Novak Djokovic was presented with a trophy on court for finishing the year with the No. 1 ranking for a record-equaling sixth time.