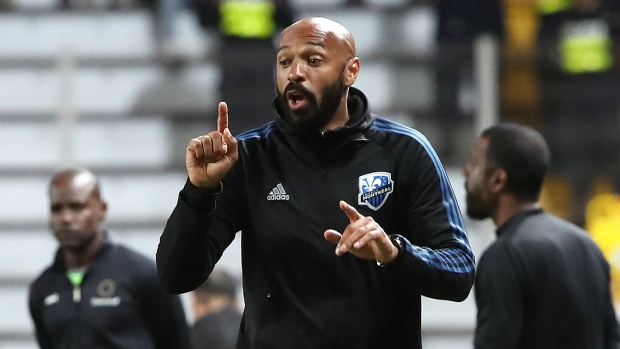 Ahead of Wednesday night’s CONCACAF Champions League Round of 16 2nd leg against Deportivo Saprissa, Montreal Impact’s new head coach Thierry Henry sat down with TSN soccer analyst Kristian Jack to talk about his emotion from the sidelines, how things are going for the Impact so far, and what he most wants to see from his team during the 2020 season.​

Kristian Jack: What was the emotion like on the sidelines when you see your boys now — your team, those ones that are looking at you — score those goals in the first half [in the Feb. 19 game against Deportivo Saprissa]? What is that like?

Thierry Henry: Yeah, you saw me, you know, I celebrated them, as you should do. But on the other side, I said it at the end of the game: It’s nice when you see your team fighting. Regardless of how you want them to play, the tactic, and all that — obviously, we’re working on it — but it’s nice to see when they battle. It’s going to be another battle against Saprissa on Wednesday, it’s going to be another one after that against New England [on Feb. 29], but at least, once they’re there, you have that desire of wanting to get the ball back and hurting a team when you have it, and you battle. For me, there’s nothing better than that.

Jack: That’s why I asked you about the emotion — because I know you went through wonderful emotions of positivity as a player, that incredible goal-scoring emotion when everybody’s cheering your name. But I also know that you would take great pleasure in providing, feeding those as well. So, it’s a selfless emotion to you, right?

Henry: It was kind of weird...it’s nice of you, noticing that actually you could see my teeth a bit more when I was giving an assist than when I was scoring. I prefer sharing than scoring, in terms of emotion. Don’t get me wrong, because scoring is still good, but you know, the sharing moment of giving a goal was always a tiny bit more enjoyable.

Jack: And does that come now, in terms of seeing what these boys can do when you can go out there and nurture them a little bit?

Henry: Yeah, it is. What’s good is when you work with a team for a little while — it’s only [been] a little while [with the Impact], you know? It’s a new way of playing, for some of the guys. When you work on something and you try to put it on the field, sometimes it won’t work — because that’s the way it is. But when you see that it works straight away, and you see the other team adjusting four times to what you’re doing, you know that the work that you did with your team is kind of working. And as you know, it was a bit difficult to hold onto the result [in the Feb. 19 game against Deportivo Saprissa] for various reasons. But it’s nice, you know, when you plan something and you see that it’s working. It’s a good feeling.

Jack: So, what are the key characteristics that you want to see from your team, Montreal Impact, in 2020?

Henry: Like I said to you, we’re going to have ways of playing and sometimes the tactic might change — it depends on who you’re playing against. Being brave on the ball, being brave off the ball. But one of the things for me, it’s very important that we have to battle. We have to battle. And people always mention being brave off the ball; you have to be brave on the ball. Because everybody wants the ball when it’s four-nil up. When you’re four-nil up, I see everybody [saying], ‘Yeah, yeah, yeah.’ When it’s nil-nil, and you missed five passes, do you still want that ball? Because you made five mistakes. Do you still want that ball and play forward, or are you going to hide? That’s what I’m talking about when I say being brave on — and obviously, off — the ball. One of the things that you hear me talk about all the time is battle. We need to battle. We need to make it difficult for teams. And I know it won’t always happen, but we need to have that.

Jack: When we see you throughout the 2020 season, we know you’re going to be animated, right? I just wanted to get it out there because that’s who you are, isn’t it, on the side of the field? That’s the kind of guy you are, right?

Henry: It depends. I’m only a human being, so if I see something that’s wrong, I might call it, sometimes I might not. It depends. You can’t control emotions, right? So, it is what it is

Jack: But deep down, we know, even when you’ve got some animation or frustration, that Thierry Henry’s having a great time here. We know that, right?