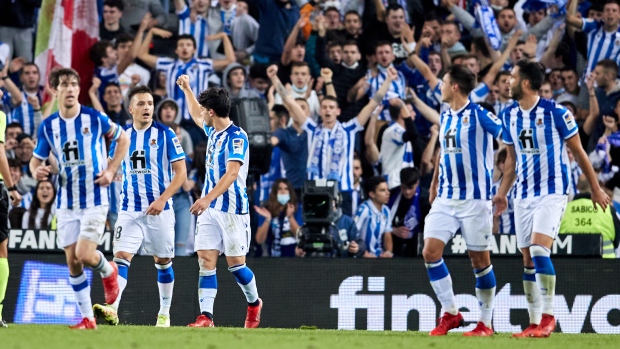 LaLiga Santander returned this weekend following the international break and it was back with a bang as Real Sociedad climbed to the top of the standings and Ansu Fati inspired a Barcelona comeback win. Here’s all you need to know from a busy week across Spanish football.

Saturday night was party night in the northern city of San Sebastian as Real Sociedad presented their Copa del Rey trophy to their fanbase at the Reale Arena – and then celebrated a last-minute winner from Julen Lobete, defeating RCD Mallorca 1-0 despite playing the second half with 10 men. Those three points place La Real as the standalone LaLiga Santander leaders, allowing fans around the world to dream of a title challenge.

Ansu Fati scores on his first start of the season

Ansu was the star of the show once again this weekend, scoring a beautiful goal on his first start for the blaugrana in almost a year. He followed up his early equaliser against Valencia by winning a penalty just before half-time, leading Barça to a 3-1 win. The teenager is being eased back into proceedings, but is already standing out every time he gets on the ball and looks every bit worthy of inheriting Lionel Messi’s number 10 shirt.

The Camp Nou crowd finally got a glimpse of their exciting summer signing Sergio Agüero, who made his debut in the final minutes of this weekend’s win over Valencia. The Argentine had been out with injury since the summer, and is now officially back in LaLiga football a decade after leaving Atletico de Madrid.

Former Barcelona player and long-time assistant to Luis Enrique Juan Carlos Unzue returned to his hometown club CA Osasuna this weekend to give one of the most emotional speeches you’re likely to see this year. Unzue was diagnosed with motor neurone disease (Lou Gehrig’s disease) early in 2020 but has remained an example of dignity and resilience in the face of such terrible adversity. “When defeat comes around, or a bad day or a training session when nothing goes your way, remember me, this guy in front of you who not long ago was training like you and is now in a wheelchair,” he said. “I don’t want to transmit sadness, the complete opposite, in fact… one is always happier when you can say to yourself ‘I tried’ than ‘If I’d have done this or that…’ That’s what really eats away at you.”
Osasuna went on to pick up an impressive win away at Champions League side Villarreal this weekend, and coach Jagoba Arrasate broke down in tears after game when talking about Unzue’s effect on the side.

Chimy Ávila has also had his fair share of injury woes but came back strong this weekend scoring Osasuna’s winner, his first LaLiga Santander goal in 651 days. Not since January 5th 2020 had he found the back of the net in the competition, having suffered serious knee issues that kept him out for over a year.

Levante vs Getafe was a unique match, as it was just the second time in LaLiga Santander history that two mid-season coaching hires made their debuts in the same game. That was the case here as Javier Pereira and Quique Sánchez Flores took over at Levante and at Getafe respectively, each starting out with a point as the sides played out a goalless draw. Neither side will be overly pleased with the result, with both still in the drop zone.

Pedri extends his Barcelona contract until 2026

There was good news for Barcelona fans this past week, with Pedri signing a contract extension at the Camp Nou and committing to the Catalan club until 2026. Having put together an incredible 2020/21 campaign, before starring for Spain at Euro 2020, the midfielder from the Canary Islands proved last year that he is one of the leading rising stars in European football.

Over the final few matches of the October international break, several LaLiga Santander stars scored goals that fired their national sides closer to the 2022 World Cup. From Rodrigo de Paul scoring for Argentina and Sergiño Dest netting for the USA to Luka Modrić curling in a freekick for Croatia to Alexander Isak firing Sweden to victory, Spain-based players made a real impact on the last round of World Cup qualifiers.

LaLiga shirts are auctioned to raise money for La Palma

Residents of the island of La Palma are continuing to suffer the effects of the Cumbre Vieja volcanic eruption, and LaLiga clubs are auctioning off match-worn shirts to help raise some vital funds for their recovery. Fans can bid on special pieces of memorabilia at the same time as helping those in need. To take part, visit: https://www.matchwornshirt.com/laliga

All attention now turns to ElClásico

There is now less than a week to go until the first Clásico of the 2021/22 season. Barcelona and Real Madrid face off this coming Sunday at the Camp Nou (4.15pm CEST), with the world watching on as the Blaugrana and the Blancos battle for the three points in an early title six-pointer and the first ElClásico since the pandemic to take place with fans in attendance.