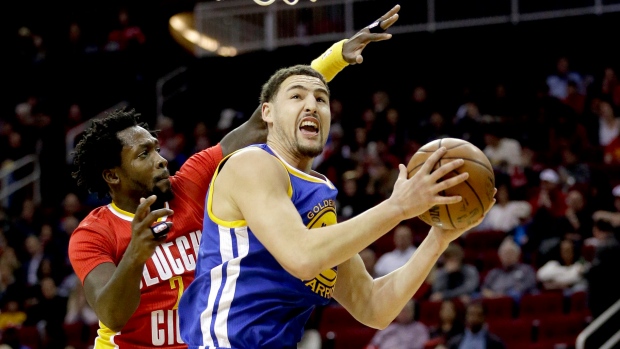 HOUSTON - Soon after Draymond Green posted his NBA-leading fifth triple-double he was asked whether Stephen Curry should worry that he was trying to steal his job as point guard while the NBA MVP is out with a leg injury.

"I don't think Steph Curry got to worry about too much of nothing," Green said, laughing.

Klay Thompson scored 38 points, Green had a career-high 16 assists and added 10 points and 11 rebounds and the Golden State Warriors overcame Curry's absence to beat the Houston Rockets 114-110 on Thursday night.

"I just tried to step up and make plays," Green said. "One thing we talked about was kind of trying to slow the pace of the game down and executing our offence."

Golden State was blown out by Dallas on Wednesday night for just its second loss of the season when Curry missed his first game since March 13 because of a sore left lower leg. But the Warriors were able to outlast the Rockets thanks to the big night by Thompson, who made six 3s.

"Last night was embarrassing," Thompson said. "We had every excuse in the world, but we didn't want to come away 0-2 so we figured out this would be a much bigger statement win if we responded like we did and won with playing 10 guys."

Houston cut it to three with a jump shot by James Harden with about 5 minutes left before Golden State scored the next six points, highlighted by an alley-oop dunk from Andre Iguodala to Bogut, to make it 111-102.

Harden had 30 points for the Rockets. They have dropped seven straight regular-season games to the Warriors.

Shaun Livingston made his second start of the season in place of Curry, who was injured Monday night against Sacramento, and finished with 13 points. Interim coach Luke Walton said Curry was feeling better Thursday, but that he was not ready to play.

The Warriors led by eight entering the fourth quarter and had scored four straight points to extend their lead to 99-87 with about 9 minutes remaining. Houston used a 13-5 run after that to cut the lead to 104-100 with about 6 minutes left.

Houston led by three points with about 3 minutes left in the third quarter when Golden State scored 10 straight points to take a 88-80 lead with less than a minute left in the quarter. Thompson scored five points in that span and Iguodala added a 3-pointer before James Michael McAdoo capped it with a dunk following a turnover by Ty Lawson.

"We're just inconsistent," Harden said. "We played a pretty good game up until the end of the third quarter when they went on that run. Just giving up small buckets like that to a really good team (is) something you couldn't really do."

Warriors: C Festus Ezeli (toe) missed his second straight game. ... G Leandro Barbosa (left shoulder sprain) and F Harrison Barnes (sprained left ankle) were not with the team. ... McAdoo got a cut over his right eye when he was hit by Howard on a dunk attempt in the first half. He received three stitches to close the gash. ... Iguodala had 20 points.

Rockets: Harden received a flagrant 1 foul when he elbowed Bogut in the neck area on a charge in the first quarter. ... Former Rockets stars Dikembe Mutombo and Tracy McGrady watched the game from courtside seats. ... Howard blocked a shot by Livingston into the stands in the first quarter and shook his finger like Mutombo used to when he blocked shots, but the Hall of Famer hadn't yet arrived. ... Howard had 21 points, 13 rebounds and three blocks.

Coach Steve Kerr, who has missed all season because of complications from back surgery, made the trip to test how his back would feel with the long travel. The Warriors haven't issued a timetable for Kerr's return, but some believe he could be back soon and that Thursday's game could be Walton's last as interim coach.

Thompson doesn't know when Kerr will return but is sure that whenever that is, it certainly won't be the last time Walton will be in charge of a team.

"It won't be his last game as a head coach," Thompson said. "He's got a great future in this league and his record (shows) that. He's a lot of fun to play for, he keeps it light around here but you also respect him and him knowledge. There's a reason we're 30-2 under him."

Walton didn't want to talk too much about the future but did reflect a bit on the season so far.

"It's been an incredible experience and it's been a lot of fun," he said.

Howard on Houston's struggles this season: "We've got to learn our lesson from tonight and be ready for the next one. Hopefully the new year will bring some wins for us and we've got to stay positive."