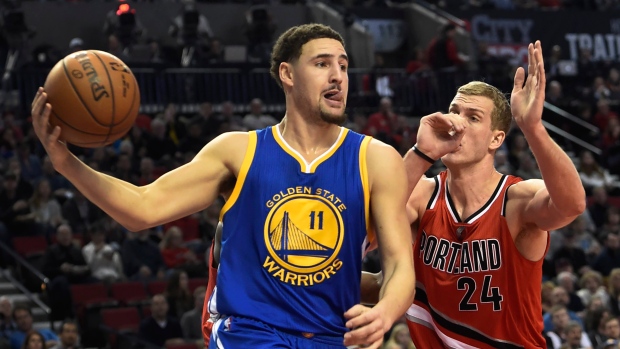 PORTLAND, Ore. - Klay Thompson got off to a fast start and the rest of the Golden State Warriors jumped on the ride.

Thompson had 19 points and five 3s in the first quarter alone, and finished with his third consecutive game with 30 or more points.

"I was just in a great rhythm," he said. "I was taking pretty good shots and it just happened to be one of those quarters."

Reigning league MVP Stephen Curry added 26 points and nine assists in three quarters for the Warriors (34-2), who led by as many as 25 points and made 18 3-pointers. Draymond Green finished with 11 points, 13 rebounds and 10 assists for his eighth triple-double of the season.

Curry started despite continued soreness from a bruised left shin that kept him out of a pair of games late last month. He aggravated the injury again when he crashed into Roy Hibbert on Tuesday night and sat out the fourth quarter of Golden State's 109-98 victory at the Los Angeles Lakers.

"It builds the morale of the team," Curry said. "When he gets good shots out of our sets and good screens, that just boosts everyone's confidence. It's a huge momentum boost and we feed off that."

Damian Lillard had a season-high 40 points and 10 assists for Portland, which dropped its third straight. It was Lillard's fourth career game with 40 or more points.

"Tonight, I knew it was going to be a challenge for us defensively and offensively because of who they are," Lillard said.

The Warriors remained unbeaten since a 114-91 defeat at Dallas on Dec. 30.

Portland was coming off a 109-98 loss at home to the Los Angeles Clippers on Wednesday. The loss was notable because starter CJ McCollum was mistakenly left off the active roster turned in before the game and was forced to sit out. McCollum finished with 17 points against the Warriors.

The Warriors jumped out to a 12-2 lead while Portland missed its first nine shots from the field. There was a brief tense moment when Curry collided with Noah Vonleh and came up gingerly.

Green's fast-break dunk put the Warriors up 24-9 and they went on to lead 74-52 at the break. Portland opened the third quarter with a 12-4 to cut the margin to 78-65. The threat was short-lived and Golden State stretched the lead to 90-67 after Brandon Rush's 3-pointer.

Rush had a season-high 20 points.

"Obviously they're on pace to have the best record ever, and I think they'll likely get it," Portland coach Terry Stotts said. "They're dominating the league right now."

Warriors: Interim coach Luke Walton said he met with his Hall of Fame dad Bill for about an hour before the game. The elder Walton, a broadcaster, is in Oregon for the California-Oregon State game on Saturday. Bill Walton was on the Blazers' NBA championship team in 1977. ... Forward James Michael McAdoo is sitting out two games because of a toe injury.

Trail Blazers: Portland is one of the few teams that knows what it's like to beat Golden State. The Trail Blazers beat the Warriors 118-101 in the preseason despite 30 points from Curry. ... It was the third time this season that Allen Crabbe has scored a career-high 18 points.

Warriors coach Steve Kerr, who is on a leave of absence following off-season back surgery, has recently been travelling with the team and was in Portland. Luke Walton laughed before the game when it was suggested he was wearing an earpiece during games and taking Kerr's instructions.

"It's a part of what makes it so great to work for Steve as an assistant: He trusts us," Walton said.

Lillard was playing in just his third game back since missing seven with left foot plantar fasciitis. He became the first Blazer to reach 40 points and 10 assists at the Moda Center (Clyde Drexler did it at the old Memorial Coliseum.) He's just the third player in the NBA to reach the combined total this season.

"I mean, I'm a confident basketball player and coming off the injury, I knew I would get it going eventually," he said.