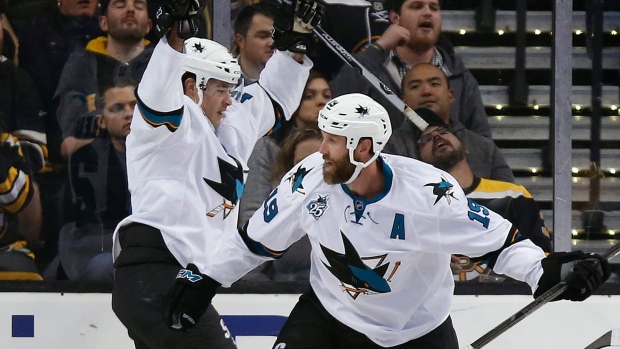 BOSTON - Patrick Marleau and Joe Thornton scored 25 seconds apart in the second period to put the San Jose Sharks ahead for good and they held on to beat the Boston Bruins 5-4 on Tuesday night.

Joe Pavelski got the scoring started 42 seconds into the game for the Sharks and had two assists. Melker Karlsson had a goal and an assist, also in the big second period when the Sharks capitalized on a string of Bruin penalties.

Joonas Donskoi scored in the first period and Brent Burns had three assists for San Jose, which won its third straight.

Brad Marchand, Loui Eriksson, Patrice Bergeron and Tyler Randell each scored for Boston. The Bruins pulled within 5-4 on Bergeron's power-play goal at 13:32 of left to play but could not overcome their second-period mistakes.

Tuukka Rask had 23 saves for Boston and Martin Jones stopped 25 shots for the Sharks.

Eriksson's goal 1:53 into the second put Boston up 3-2, the last lead the Bruins would hold. Karlsson tied it with a goal 5:56 into the period, then the Bruins committed four straight penalties and San Jose capitalized with power-play goals by Marleau and Thornton.

Boston was called for too many men on the ice late in a power play and San Jose took a 4-3 lead when Marleau scored on a rebound 8:56 into the second period. Boston coach Claude Julien challenged the call, saying Thornton interfered with Rask as Marleau got the puck behind him, but the goal was upheld.

Boston was at even strength for all of 11 seconds before Ryan Spooner was called for interference. The Sharks pounced quickly and took a 5-3 lead on Thornton's one-timer from the slot at 9:21.

Notes: Seidenberg played in his 700th game. Boston D Adam McQuaid played in his 300th game. ... Thornton, the former Bruins' captain, has four goals and eight four assists in 12 games against Boston. ... The Bruins have yet to win consecutive home games this season.