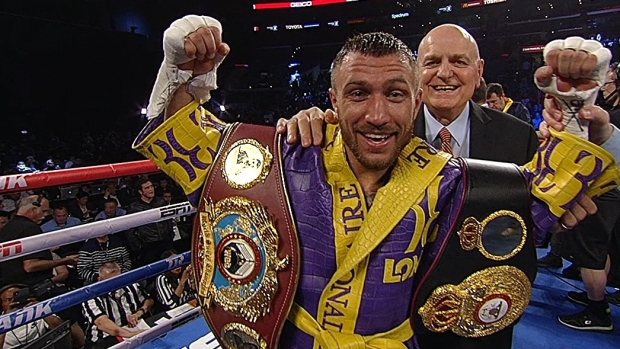 Lomachenko, who is the number one pound-for-pound boxer in the world according to ESPN, is currently listed as a -400 favourite to won this bout.

This fight will mark just the third time in men’s lightweight history that three or more belts are on the line in a unification bout.

Here are three things to watch for on Saturday night.

The Case For Loma

If you look at the resumes of both Lomachenko and Lopez, that sentiment is hard to argue against.

Far too often, the best boxing matches are left to marinate for way too long.

That certainly will not be the case here.

Lomachenko is the best pound-for-pound boxer in the world according to ESPN.

His speed, technical prowess, experience and reputation all contribute to his status as a -400 favourite to win this bout.

While he isn’t known for his punching power, his style alone has proven capable of ending fights.

Between November 2016 and December 2017, Lomachenko frustrated four straight fighters so much that each had to quit on the stool.

In his four lightweight fights, Lomachenko has taken down names like Jorge Linares, Jose Pedraza and Luke Campbell.

The expectation is that he will add another name to that list on Saturday night with a win over Lopez.

Lomachenko is listed at -400 odds to win, which translates to an 80 per cent implied win probability.

The Case For Lopez

In 15 professional fights, Lopez has posted an impressive 80 per cent knockout rate.

The undefeated 23-year-old has immense power in both hands and a three-inch reach advantage over his 32-year-old opponent.

Lomachenko’s critics will also point to the fact that he is on the smaller side for a 135-pound fighter.

He’s been knocked down only once in his career, which happened to be in his first fight at lightweight against Linares – a fight he eventually won by TKO in the 10th round.

If Lopez is going to win this fight, you would think it would have to be by knockout.

After all, he’s won six of his last seven fights by KO.

Lopez can currently be found at as high as +300 to win this fight.

Even more tantalizing are his odds to win via KO.

Lopez is currently a +500 long shot to win by knockout.

While the majority of the focus is on the main event of the evening, it isn’t the only intriguing match-up on the card.

The 14-0 Edgar Berlanga will clash with Lanell Bellows in a super middleweight showdown.

180 seconds might not seem like a long time, but Berlanga has certainly made the most of those seconds.

In 14 professional fights, the undefeated KO artist has gone 14-0 with 14 knockouts.

Think about that for a moment.

The average length of his fights is just 96 seconds.

Berlanga is the overwhelming favourite to beat Bellows at a ridiculous -6000 odds, which translates to a 98.4 per cent implied win probability.

The only question – can he end it in the 1st round in order to keep his streak alive?

You can catch all of the action live across the TSN Network on Saturday night.