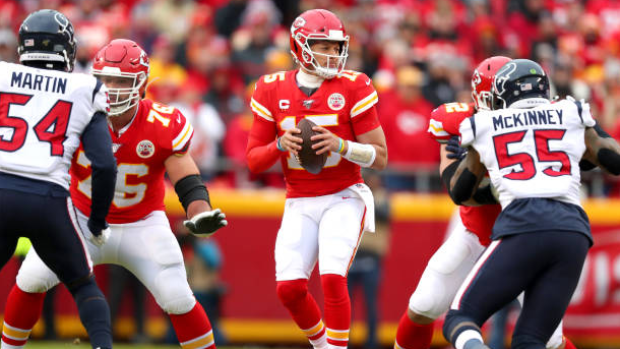 Week 1 of the NFL season has arrived.

Seven months after they raised the Vince Lombardi Trophy, the defending Super Bowl champion Kansas City Chiefs kick off their title defence against the Houston Texans at Arrowhead Stadium on Thursday night.

The two biggest stars from the 2017 NFL Draft, Patrick Mahomes and Deshaun Watson, will go head-to-head for the third time in their young careers.

With the total for this game set at 54.5 – the highest number on the board for Week 1 – expect to see plenty of fireworks as two of the league’s high-powered offences meet on opening night.

Pursuit Of A Dynasty

The countdown to the start of the Chiefs title defence is almost over.

Kansas City has scored more points than any other team in the NFL over the past three seasons (29.8 PPG).

The scary part is that, at least on paper, this year’s offensive cast has the potential to be the most dangerous group the Chiefs have ever assembled.

Mahomes is the obvious favourite to win his second NFL MVP. Travis Kelce is in the conversation for the best tight end in the league. Tyreek Hill, Sammy Watkins, Mecole Hardman and DeMarcus Robinson make up one of the most lethal and explosive receiving cores in the NFL.

Plus, the entire Kansas City coaching staff returns intact. How’s that for continuity heading into a year in which familiarity will be that much more important with a limited off-season and no preseason games?

The Chiefs added yet another dynamic playmaker to the fold when they selected running back Clyde Edwards-Helaire in the first round of the 2020 NFL Draft.

General manager Brett Veach asked Mahomes before the draft who he wanted them to take with their top pick. His answer? Edwards-Helaire.

Edwards-Helaire, who head coach Andy Reid has compared favourably to another special running back he coached in Brian Westbrook, has rocketed up fantasy football league draft boards since he arrived in Kansas City.

Considering what the top rushers have done in Reid’s offences dating back to his days in Philadelphia, CEH undoubtedly has the potential to produce RB1 numbers in his NFL debut.

Volume will be key. That shouldn’t be an issue after Damien Williams opted out of the 2020 season.

Helaire’s over/under prop bets for Thursday night have been set at 12.5 rushing attempts and 3.5 receptions made, which lines up with what the starting running back averaged for the Chiefs last season.

The CEH hype is real.

So what does this all mean for Mahomes’ MVP stock?

Two years later, Mahomes is a more experienced, knowledgeable, seasoned passer with an even better supporting cast than he had in 2018.

As long as he stays healthy, Mahomes has the potential to shatter NFL quarterback records in 2020.

I can’t wait to get our first look at this Chiefs offence on Thursday night.

Is Houston Ready For Takeoff?

The outlook for the Houston offence isn’t nearly as certain.

Any conviction we had in the long-term expectations for this group went out the window when the Texans traded star receiver DeAndre Hopkins back in March.

The good news is that Houston locked up its star quarterback Watson with a four-year contract extension.

Watson has thrown for at least 3,800 yards and rushed for 400 yards or more in each of the past two seasons.

While he lost his top target in Hopkins, the Texans have surrounded Watson with an impressive cast of playmakers in Will Fuller, Brandin Cooks, Randall Cobb, Kenny Stills and running back David Johnson.

There’s still more than enough talent in Houston to remain confident that Watson won’t skip a beat as a top-five fantasy quarterback as long as this group can stay healthy in 2020.

Cooks was limited at practice on Wednesday and is listed as questionable for Thursday’s game against Kansas City. If he can’t go, it will push Stills into a bigger role as the third option in the passing game against the Chiefs.

The Chiefs opened as 10-point favourites, but that number is as low as nine now in some spots.

The Chiefs will be the 16th defending Super Bowl champions to feature in a season opener since 2004. The previous 15 defending champs have produced a combined 12-3 record in their opening games.

The last time these teams met in the AFC Divisional round back in January, Mahomes threw for 321 yards and five touchdowns, with 54 rushing yards in a 51-31 win.

I feel confident taking Kansas City straight up in my pick ‘em pool. I’m a lot less inclined to take them at -9.5.

Still, Houston was spotted a 24-point lead against the Chiefs in the Divisional round and lost by 20, so I’m not willing to trust the Texans to keep this game close.

If forced to pick a side, I’d take the Chiefs both straight up and at -9.5.