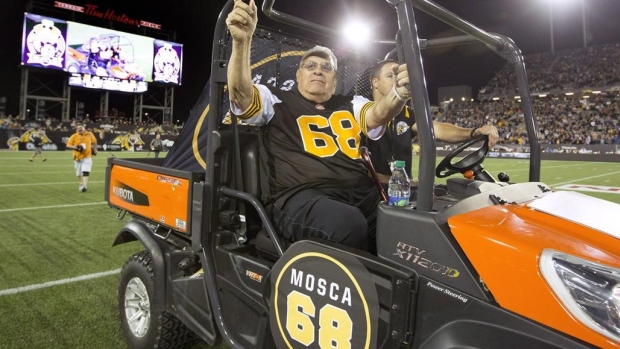 "I'd hear that cane clicking coming down the hall," Steinauer reminisced Monday. "He'd always come and peek his head in and if you let him he'd sit there for a half hour and if it wasn't for that day he'd still come by the next.

"He was a steady influence at practice and it was always comforting to have big Ang around. For me personally, he'd often leave me a voice mail or something, words of encouragement."

The Hall of Fame defensive lineman's wife, Helen, announced Saturday that Mosca had died following a lengthy battle with Alzheimer's disease. He was 84.

The six-foot-four, 275-pound Mosca played collegiately at Notre Dame. He joined the Ticats in 1958 before being selected in the 30th round, 350th overall, in the '59 NFL draft by the Philadelphia Eagles.

Mosca elected to remain in Canada and was dealt to the Ottawa Rough Riders in 1960, eventually earning the first of his five Grey Cup rings that year. He spent two seasons with the Riders before joining the Montreal Alouettes in 1962

He returned to Hamilton in 1963 and remained with the Ticats until his retirement following the club's home Grey Cup win over Saskatchewan in 1972.

Mosca played in nine Grey Cup games and earned a reputation as the CFL's meanest player. It's something he later promoted during his tenure as a professional wrestler, going by the name "King Kong" Mosca.

In 2015, the Ticats retired Mosca's No. 68, making him just the second player in club history to have that honour bestowed upon him. The other was quarterback Bernie Faloney (No. 10 in 1999).

Long after his playing days, Mosca was a fixture in Hamilton and often attended Ticats practices and games. His gregarious, outgoing personality, thunderous laugh and approachability always made him a fan favourite.

And middle linebacker Simoni Lawrence says Ticats players always knew when Mosca was in their midst.

"You know? You're playing good today. Keep it up,' and leave it like that. He was a first-class man, he was tough as heck and one of those guys where it was like, 'Oh, Angelo is outside, let's turn it up some more for practice today because Angelo is watching.'

"You want to perform great in front of legends, especially when they're so hands-on and talk to you like that. When you think of Hamilton, you think of Angelo Mosca and he's going to be missed."

Steinauer was a defensive back with the Ticats (1997-2000) and earned a Grey Cup ring with the club in 1999. He served as Hamilton's defensive co-ordinator (2013-16) before heading to Fresno State in 2017, only to return to the franchise in 2018 and become head coach the following year.

"I didn't know him as the legendary wrestler or legendary football player," Steinauer said. "I just knew him as the guy who was at practice and the great stories he would tell . . . when I was around him he was just so humble and open to any and all questions.

"We're definitely going to miss him but we were blessed to have had him for as long as we did. He was just a cornerstone, he was a rock."

And in Lawrence's mind, Mosca will forever personify Hamilton.

"We just try to uphold that tradition and keep playing great defence, hustling and doing the right things."

This report by The Canadian Press was first published Nov. 8, 2021.