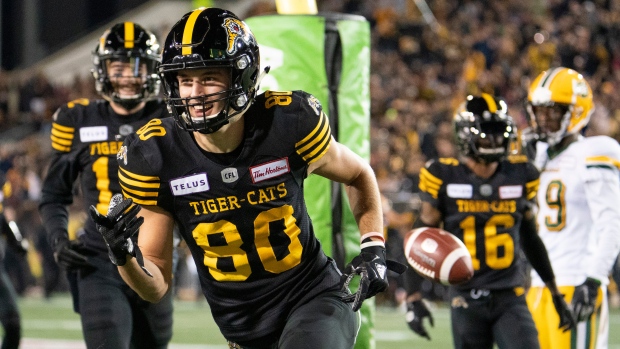 HAMILTON — Playing at home continues to be a huge advantage for Dane Evans and the Hamilton Tiger-Cats.

Evans threw two touchdown passes to lead Hamilton to a convincing 42-12 win over the Edmonton Eskimos on Friday night. The East Division-leading Ticats (league-best 12-3 record) improved to 7-0 at Tim Hortons Field and remain the CFL's lone unbeaten club at home.

"I think we're just playing for our fans, honestly," said Evans, who improved to 7-2 as Hamilton's starter. "They're such smart football fans, they know when to be loud, they know when not be loud.

"They know when to let the refs have it a little bit and I think that's a great home-field advantage. We're definitely happy to be able to come back here later in the year."

Evans finished 24-of-32 passing for 277 yards and the two TDs before an energetic Tim Hortons Field gathering of 23,411. It's the first time in five games Evans failed to throw for 300 or more yards.

But it was more than enough to help Hamilton cap its stretch of four straight games against West Division clubs — including three on the road — with a 3-1 mark. And the lone loss, a 19-18 decision in Calgary on Sept. 14, came when Stampeder Tre Roberson blocked a late Lirim Hajrullahu field-goal try.

Hamilton finished with an 8-2 record against the West Division this season. The Ticats will have a bye next week before ending its regular season against Ottawa, Montreal and Toronto.

Hamilton will cement first in the East — and home-field advantage for the conference final — if Montreal (7-6) loses to Calgary (9-4) on Saturday.

"I'll be on the road travelling with my wife a little bit," Evans said. "I'll probably check it every now and then but we'll see where we're at when we come back in a week.

"We'll be ready to play then."

"We're not depending on anybody to win the division but ourselves," he said. "If you want to do it then do it yourself.

"Anything else is an uncontrollable factor. We'll never focus on those, not as long as they let me stand in front of this podium. We're going to worry about what we can control and that's our next game."

The contest capped an emotional 48 hours for Steinauer. Hamilton celebrated its '99 Grey Cup-winning team — a squad Steinauer played for — with a number of those players addressing the current Ticats squad Thursday.

Then on Friday night, the franchise added safety Rob Hitchcock, another member of the '99 team, to its Wall of Honour.

"We really emphasized focusing because there was a lot of distractions, great distractions," said a visibly emotional Steinauer. "You don't know how you'll respond.

"Special night and just proud. It's about getting a win and we found a way to get that done."

Friday night's game was Hamilton's first at home since a 38-27 win over Toronto on Sept. 2.

"I can't put my finger on it (Hamilton's home record) except it's an advantage and it should be an advantage to play at home," Steinauer said. "I mean, they (fans) are here for us so why not use that?

"But again, the game is always about execution, it's about preparation and credit the staff. They did an outstanding job, the players understood it and then it's their job to go out and execute and play fast. We try and let the scoreboard take care of itself."

David Watford cemented the win for Hamilton with a two-yard TD run at 7:32 of the fourth that put the Ticats ahead 31-12. Then, for good measure, Richard Leonard had a 19-yard interception return TD which Evans capped by hitting Bralon Addison for the two-point convert at 9:11 to make it 39-12.

Edmonton (7-8) suffered its fourth straight loss to Hamilton and fifth in six games overall. The Eskimos would've clinched a playoff berth with a victory.

Logan Kilgore was 23-of-32 passing for 233 yards with a TD and three interceptions. His nine-yard TD strike to Natey Adjei at 2:55 pulled Edmonton to within 25-12 but Hamilton's Delvin Breaux intercepted Kilgore's two-point convert try.

C.J. Gable ran for 47 yards to boost his season total to 997, leaving him three yards of becoming the first Eskimos since Mike Pringle (2003-04) to register consecutive 1,000-yard rushing campaigns. But Gable spent the fourth on Edmonton's sideline.

Evans staked Hamilton to a 19-3 half-time advantage with a 14-yard TD pass to Acklin at 7:43 of the second, then found Addison for the two-point convert. Frankie Williams' 30-yard punt return put the Ticats at the Edmonton 31-yard line.

Both teams scored on their first drives. Hamilton opened with Banks' five-yard TD grab at 3:26, then Evans found Tucker for the two-point convert.