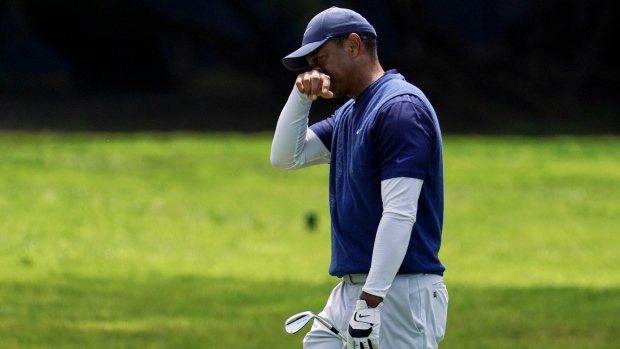 For the second straight round, Tiger Woods struggled on the greens at TPC Harding Park, falling down the leaderboard and out of contention at the PGA Championship.

It was a lackluster, unimpressive round that reeked of rust, of a player who looked as though he needed more PGA Tour reps rather than those in Jupiter, Fla.

The longest putt Woods made on his opening nine was a five-footer for par on the fifth hole. In his first 13 holes, he managed to roll in just 29 feet of putts. While he did manage to make a few in his last few holes, his poor play on the greens has been frustrating.

“I didn't make anything early,” admitted Woods. “I had a couple opportunities to make a couple putts, and I didn't. They were burning edges. I had a couple lip-outs, and just nothing really got the round going.”

While the missed putts were glaring, they were far from the only problem plaguing the 15-time major winner. He hit just four fairways on a course where the rough is as gnarly as steel wool. Too often, he left himself on the wrong side of the hole to set up an aggressive approach.

He registered negative numbers in a quartet of Strokes Gained categories: Off The Tee, Around The Green, Tee To Green and, of course Putting.

He is also yet to register an up-and-down from the bunker in seven attempts this week, something very un-Tigerlike.

This is just his seventh competitive round since February and while he doesn’t seem to feel his mistakes are due to a lack of play, he certainly looks as though he could use some more tournament time.

If there is anything positive, it’s that his body has gone through 54 holes without crying out. No back spasms, no glutes that refuse to fire or stiff necks from bad pillows.

On Sunday, Woods will look to find a way to play inspired golf. He knows he is not going to win but the competitor in him also knows that there are 72 holes in every tournament. He just has to convince himself that it means something.

“Last day and we still have another major championship to play and get ready for the Playoffs and we have the U.S. Open after that,” said Woods looking down the calendar. “We have some big events to be played, and hopefully tomorrow I can shoot something in the red and get it to under par for the tournament, and hopefully I can do that.”

The truth is, though that at 43, Woods is running out of chances to win majors. There are only so many left on his timeline and only so many swings left in his body.

With every one that he doesn’t win the odds of him catching Jack Nicklaus diminish, like blocks being removed from the Jenga tower. He’s getting older, the competition is getting better, and there’s a finite schedule ahead.

“There's not as many as when I first started playing,” said Woods, who is playing in his 85th major this week. “The reality is that the golf courses are getting bigger. They are getting longer. The margin between making the cut and the lead is a lot smaller than it used to be. Used to be sometimes 12 to 15 shots.”

Woods still has the ability to play better than anyone else. He showed that at the Masters in 2019. Will he do it again?

Don’t bet against it.